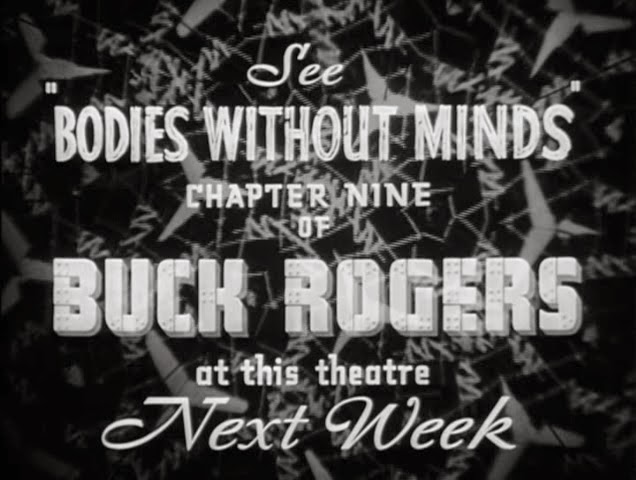 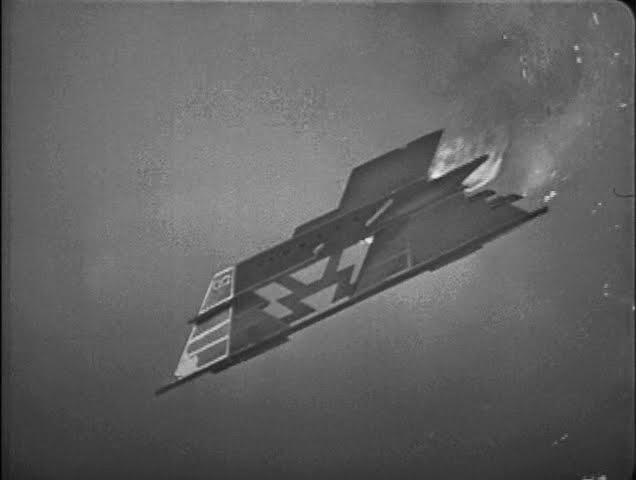 No, it wasn't a little man jumping from the exploding ship. It was just spark from the explosion itself. Turns out the Rocket did more damage in the rear that in the front, and Buck and Wilma are going down. They crash in the rocks. Kregg orders Captain Rankin to get is Squadron ready to fly out on a moments notice. Once Rankin's Squad is ready Kregg orders them to take off and head North by West. Captain Rankin walks into the hanger where he is met by a whole squad of pilots. How are they ready to take off? They have not even prepped their ships! 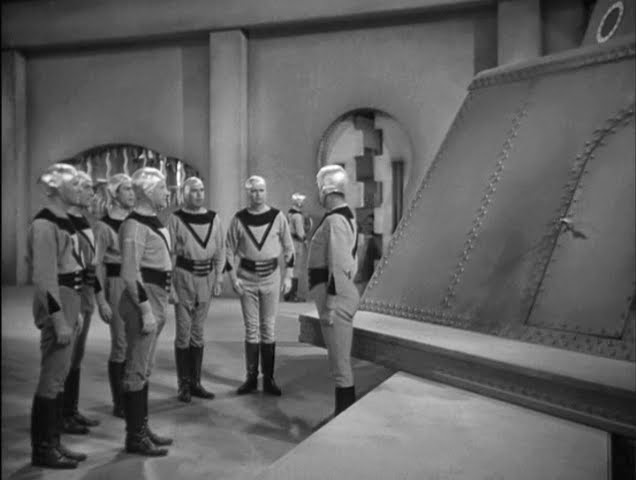 Buck and Wilma are taken captive by Kane's Patrol Soldiers. Now that Kane has Buck Rogers prisoner, he feels that the war with Hidden City has finally come to an end. Not sure how he came to that conclusion, as Buck just joined the Hidden City Rebellion like a couple of days ago, not to mention that Hidden City would never surrender their fight for freedom for one man. Kane orders that an amnesia helmet be placed on Buck's head. After polishing Kane's boot, Buck is taken to the Dynamo Room. Captain Rankin reports back to Marshal Kregg and Dr. Huer that there was nothing left of Buck's spaceship. It was all destroyed in the fire, leaving only a couple of steal plates and buckled beams. Not sure what wreckage he found, 'cause when we saw Kane's men removing Buck and Wilma from the ship earlier, the ship looked pretty much intact. 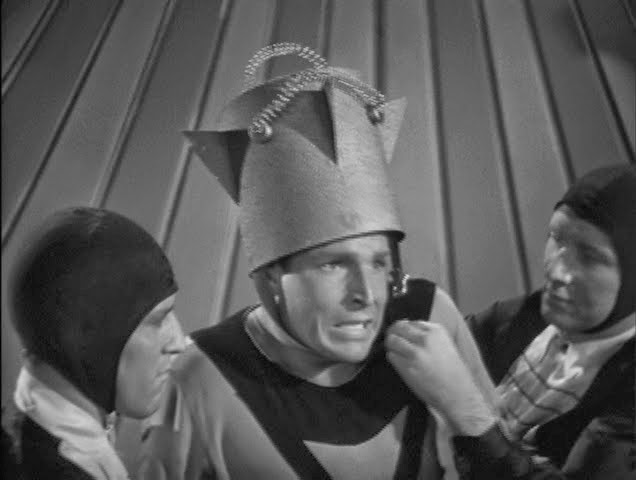 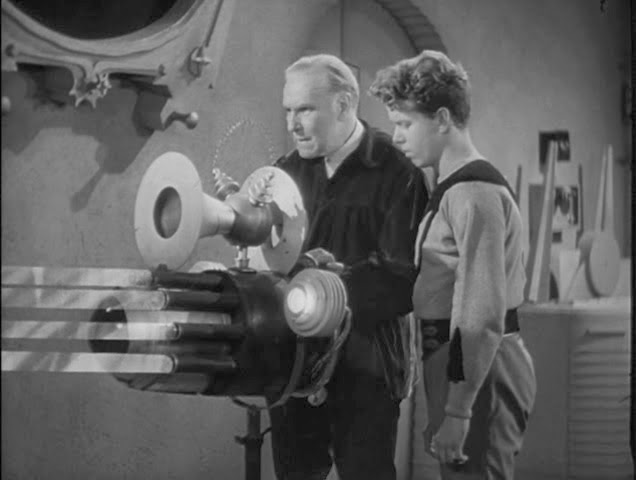 Hey, Buddy is back! Buddy insists that Buck and Wilma are still alive and wants Dr. Huer to use his Past-O-Scope to watch a scene that happened on another planet. Perhaps if they re-watch Kane's men capture Buck on Saturn, it will prove that Kane wants Buck alive. First thing Dr. Huer has to do is to blot out the present from their vision. Then they have to coordinate the time with the distance to Saturn, and if they can find the exact point of convergence they might be able to see into the past. Insert footage from Tragedy on Saturn. It's still not enough to prove that Wilma and Buck are still alive. Buddy storms off like a baby. Captain Rankin joins Buddy outside the Marshals office where Buddy suggests to Rankin to fly him to Kane's building and look the other way when he bails out of the ship. Buddy's plan is to prove that Buck and Wilma are still alive. 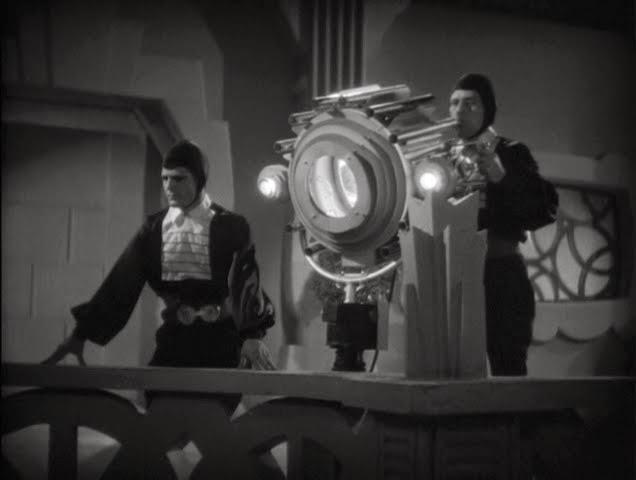 Kane is too excited about his new captive and takes a peak on Buck in the Dynamo Room. Captain Rankin is flying Buddy over Kane's building as Buddy prepares to jump out. Buddy makes a mistake and calls Captain Rankin "Lieutenant". Buddy leaps from the ship and with his degravity belt, gently lands on Kane's building. After avoiding a patrol force behind a potted plant, Buddy scales the side of building. A guard on the building opposite, heard a noise and turns on the spot light to search for the culprit. Buddy evades being spotted and somehow manages to make it to the top of the opposite building from where he started...or maybe it isn't the same spotlight that was used to search for him, but another one? Buddy enters Kane's council room to use his Tele-Vi to find out if Buck is still alive. He first tunes into the hanger. Nope, Buck's not there. Next is the Dynamo Room (which should have been his first choice) and sure enough, there is Buck, wearing an amnesia helmet. 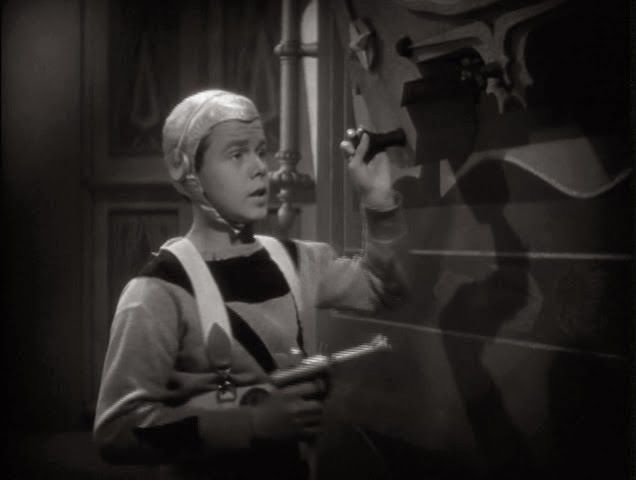 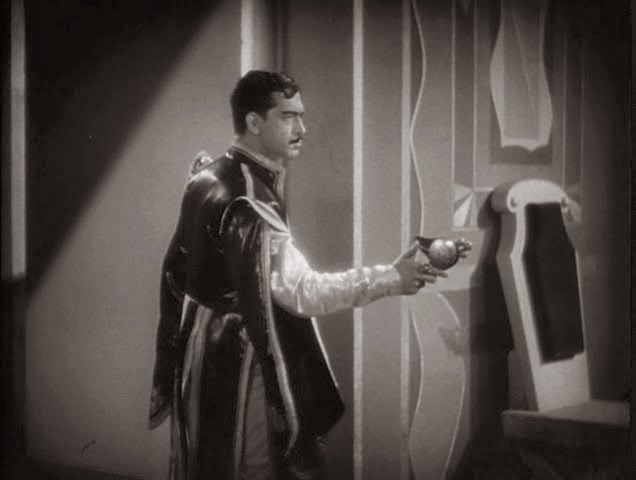 Killer Kane enters the council room and sees Buddy. Instead of shooting him right then and there in the back, he turns on the light to alert Buddy that he is caught. Shots are fired. Buddy shoots out the lights and ducks under the table. Kane order guards into the council chamber to find Buddy. Buddy bolts for the window. Too late! He is shot in the back, and whatever that thing he has on his back (something to the gravity belt?) takes a direct hit and explodes. Buddy is down. 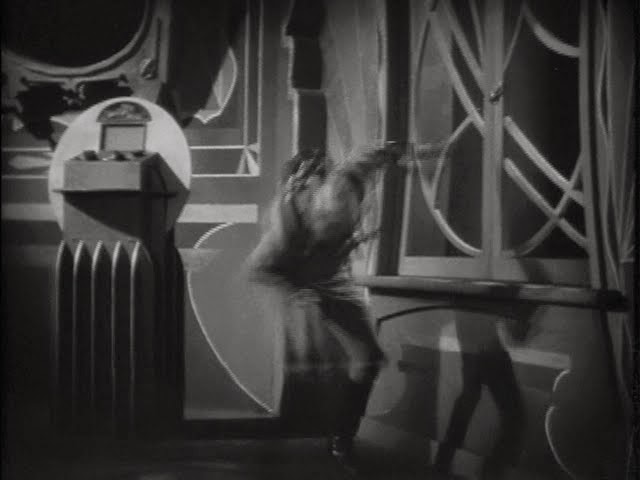