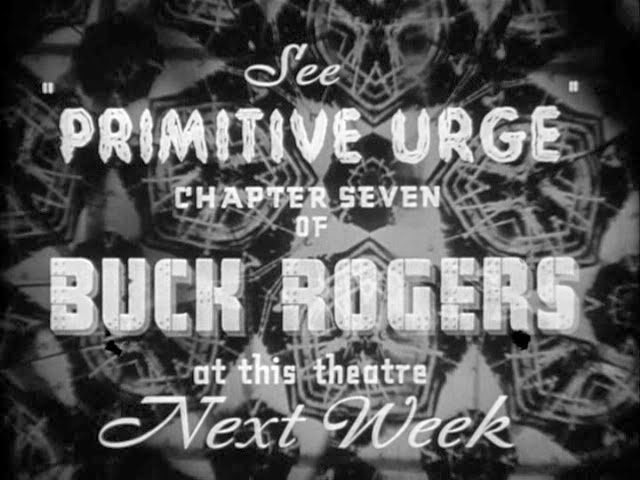 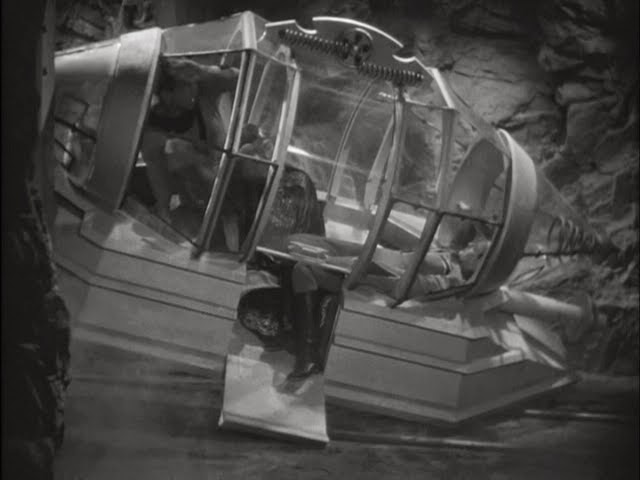 I cannot imagine Laska being too popular with the Saturnian's now that they think he may have just killed Prince Tallen. Sure enough, Laska is disarmed and taken captive. Buck and Wilma are just fine. It's a good thing that the explosion that engulfed the whole Tunnel Car was just superficial. I mean, nothing like running into a solid wall in a car traveling at high speeds, with no seat belts and being able to walk away from it. Laska is taken away to be charged with the attempted Murder of Prince Tallen, but he escapes by overcoming the one guy they sent to guard him. Buck and Wilma try to get Prince Tallen to snap out of it, as he is still looking zoned. Removing his helmet, Prince Tallen is back to his normal self again. Tallen's soldiers show up in a second Bullet Car and attempt to arrest Buck and Wilma. Tallen says that they are not to be arrested for they are his best friends. Laska with more Saturnian's and Zugg's show up in a third Bullet Car right behind the second. Laska is wearing a Saturnian cape in order to disguise himself. Tallen shows everyone the filament that Laska used to control his mind. Buck suggests that the Lt. use the Filament on himself to confirm its effects. Thanks Buck! Why not try a psychedelic drug to see if it really does work? No, Tallen's word is proof enough. 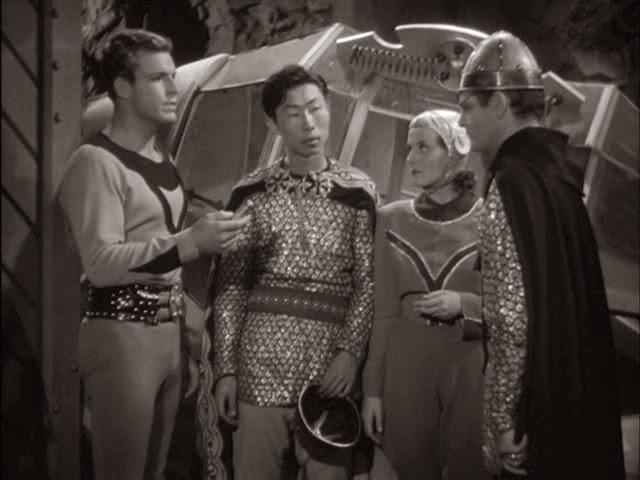 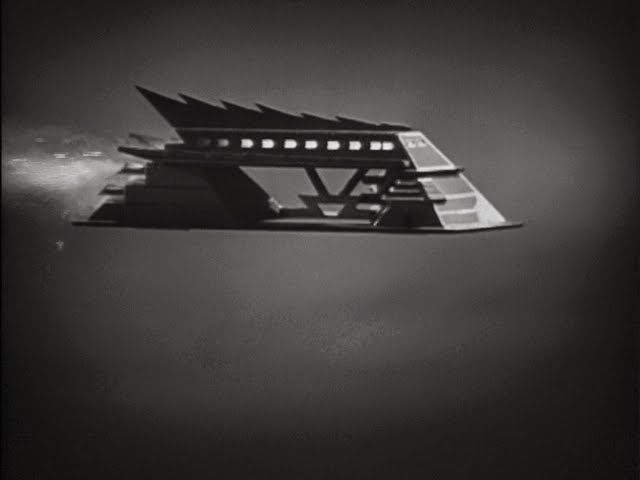 Laska made it back to his spaceship unnoticed and released the three men that Buck had prisoner there. They take off before Buck and a squad of Saturnian's could take them all into custody. Buck and the squad follow Laska and his men, in Buck's spaceship. Unfortunately the Zugg dumped the Starting Racks and it would take a half hour to reload them. They wont be able to follow Laska after all. Kane's ship fly's away at 3/4 speed. Instead of going back to Earth, they plan to cruse around a little, before they return to Saturn. They wont let Buck Rogers win that easily, and noway are they going back to Kane with their tails between their legs. Captain Roberts and Patten go out together while Laska and Scott pair up. In the council room, the Council members sign the treaty with Hidden City. Excited about the news, Buck uses the radio from his spaceship to contact Dr. Huer to inform him on their success. He contacts Air Control, who contacts Dr. Huer's Lab, but Dr. Huer's Lab assistant says that he is will the Air Marshal. Air Control transfers Buck to Marshal Kregg's office instead. They are calling Buck 'Colonel Rogers' again. Buck intends to return to Earth in a day or two. 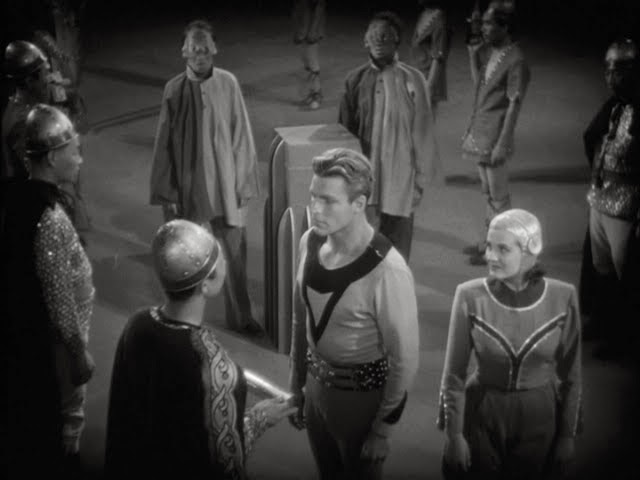 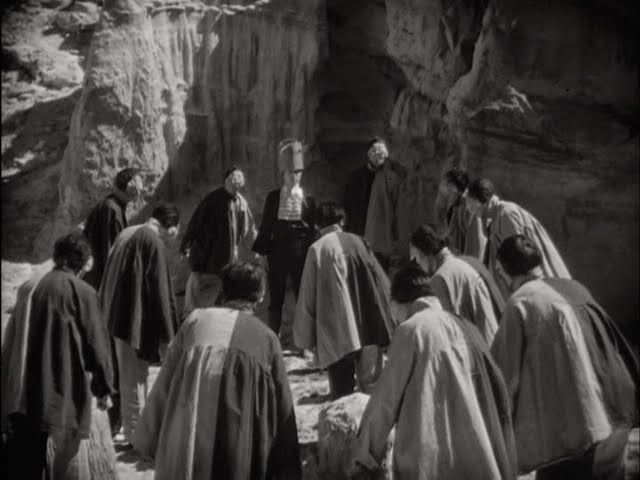 Roberts and Patten found Robot Martin, who they left for dead, wasn't in fact dead, only stunned. Now the Zugg's found him and treating him like some kind of god. So, here are primitives who are worshiping a robot as if he was a god, that Kane's men want to use for their advantage...I wonder where he have seen that before? Two Saturnian Guards find Robot Martin and demand to know who he is. Martin tells the Zuggs to take the Saturnian men prisoner, but one manages to escape, even after being shot. Laska tell Robot Martin to tell the Zugg's to gather all their men (all Zugg's) and to wage war against the Saturnian's. 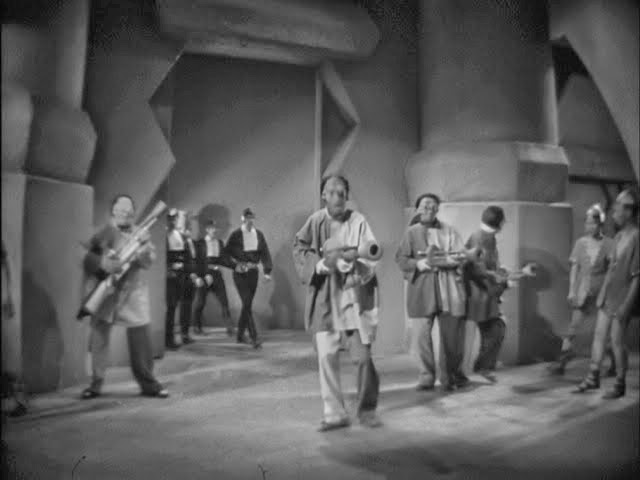 The Saturnian Lieutenant who escaped lost his cape when he ran away, but got it back when he made it to the Tunnel Car. Exiting the Bullet car he orders that the cars power to be turned off because the Zugg's are revolting. So, what do they Zugg's do? They turn it back on. He runs into the council chambers and informs Aldar that the Zugg's are going to revolt and will be marching on the Forum. Sure enough, Robot Martin, Laska, Patten, Scott, and Roberts enter the Forum in the next Bullet Car, followed by an army of Zugg men. Aldar orders to get General Koldar, but it's too late. Laska and his army have taken control of the council room. Laska uses Buck's radio to contact Kane to send a squadron of Spaceships to Saturn to maintain order. Buck needs to stop him! Tossing Laska aside, Buck throws the radio at the attacking Zugg's destroying it. 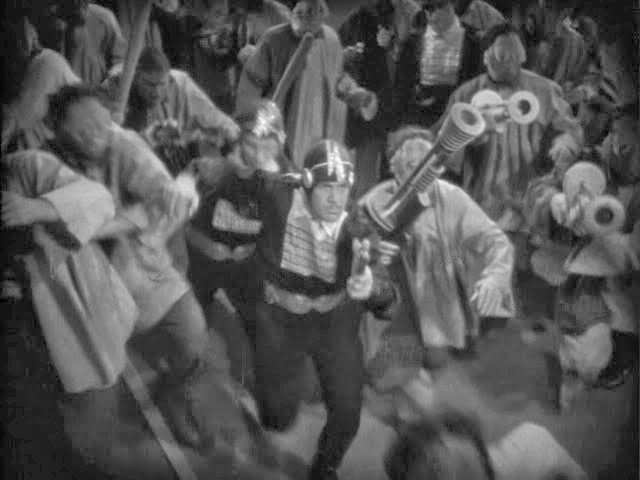