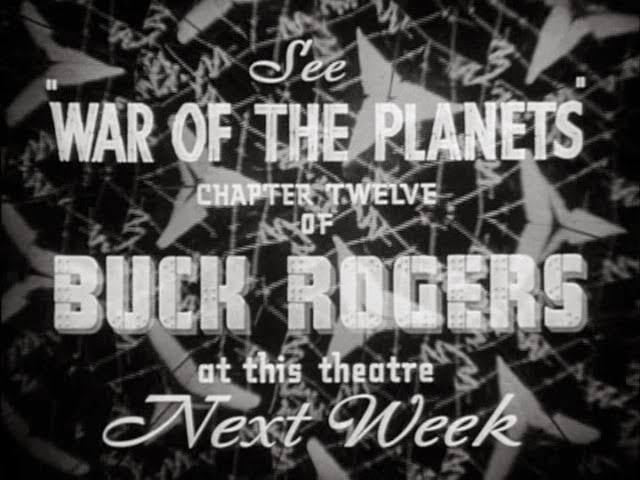 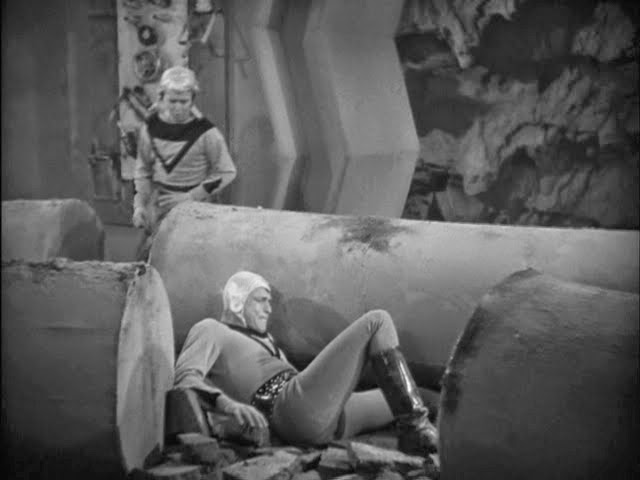 Luckley the several ton stone pillar that landed on Buck's foot didn't crush it beyond use, but just pinned him in place. With his Disintegrater Pistol, Buck blasts the pillar section to free himself. Buck and Buddy take cover in the tunnel with the rest of the surviving Saturnian's and Zuggs. Confident that their bombardment of the Forum was successful, the Kane ship lands to survey the results. Perhaps now the Council of the Wise will agree to their terms. So it would seem that the bombing changed the minds of the Saturnian's once again, and they plan to make peace with Kane in order to prevent any more destruction. Now, if the Saturnian forces were supposed to so large and powerful that they would overcome Kane's army, how come they are forced to surrender when attacked by only one of Kane's ships? They certainly are not living up to their reputation. 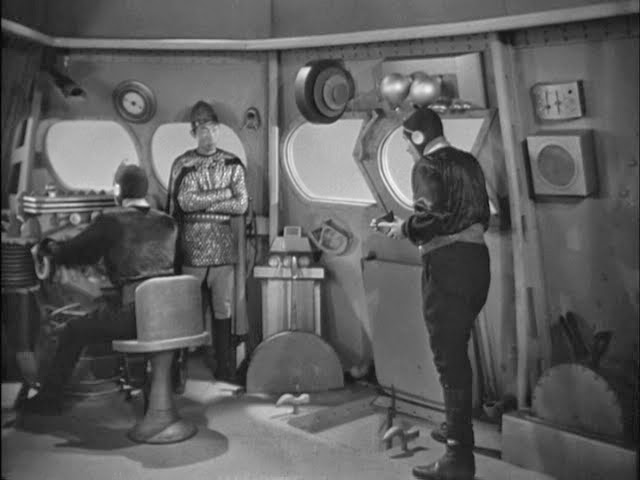 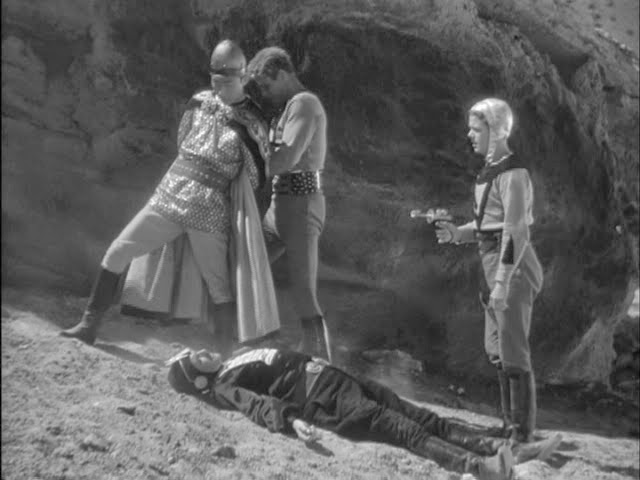 Patten and Laska emerge from their ship with Prince Tallen, who meet up with two other Kane Soldiers, Scott and Captain Roberts. Laska will get this treaty signed if it's the last thing he does. If Laska does not return in one hour, the men have orders to kill Prince Tallen. Buck and Buddy sneak in closer to where they have Prince Tallen captive. Buck jumps down on top of one guard (the old jump from above trick) while Buddy covers another guard from on the rocks. Buck takes out all three men while Buddy takes his eyes off the forth to come down from the rocks and cover him from ground level. Laska, Patten, Scott and Roberts are all captured once again, and Prince Tallen is saved. Once Tallen is safe and Kane's men under lock and key, Buck and Buddy head back to Earth, telling Tallen that he will hear from them. Wait, wasn't the point in Buck going to Saturn was to get them to come right now, not later? Why are they still delaying this battle? 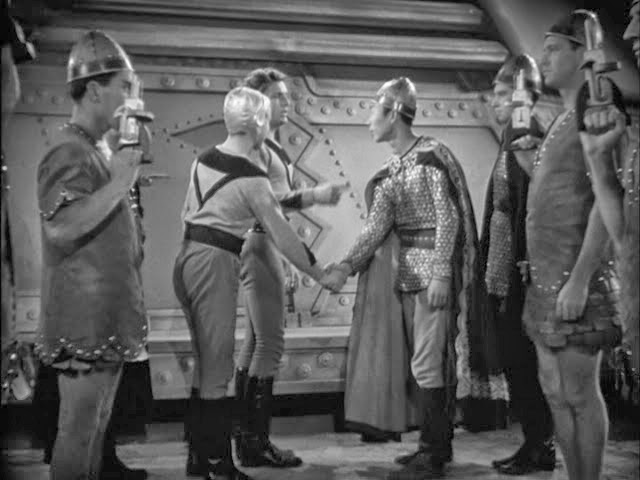 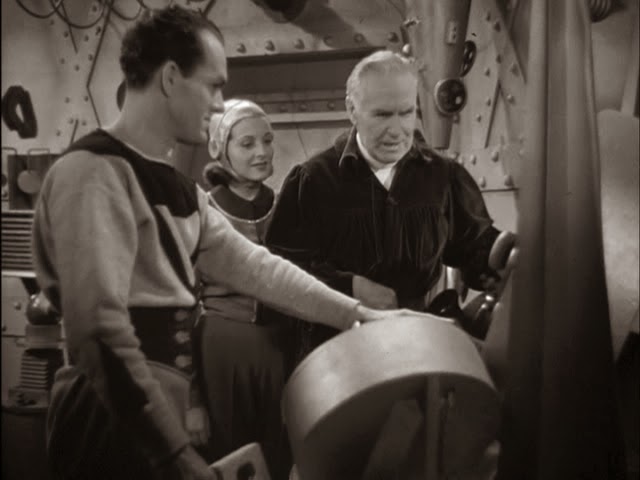 Buck radios for the Scientist General, Dr. Huer. Air Control patches him through to Professor Huer on 725. Rogers informs Huer that he is cruising at 60,000 feet. Buck instigates Battle Plan 'B'. Every ship is to be launched to keep Kane's forces occupied above Hidden City, allowing the Saturnian Spaceships to slip through the Blockade unnoticed. Dr. Huer teleports to see Marshal Kregg to instruct him to send the ships out immediately. Buck, instead of heading to Hidden City, lands on Killer Kane's private air field. All his ships are gone fighting the Hidden City forces. First stop, the Dynamo Room. Buck and Buddy take one of Kane's men hostage by gun point. Then they do something pretty stupid. The tell the man to yell down to the Floor guard to send Krenko up to him. What is stupid is that the guard should have yelled and given away Buck and Buddy to the guard and sounded the alarm. But he feared for his life more, I guess, and complied. He yells down to the Floor guard to bring Krenko up to the balcony. Buddy keeps the balcony guard covered, but cannot keep his eyes on him. 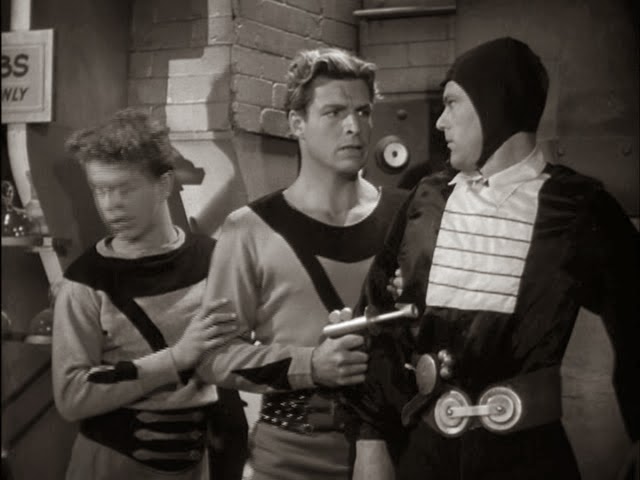 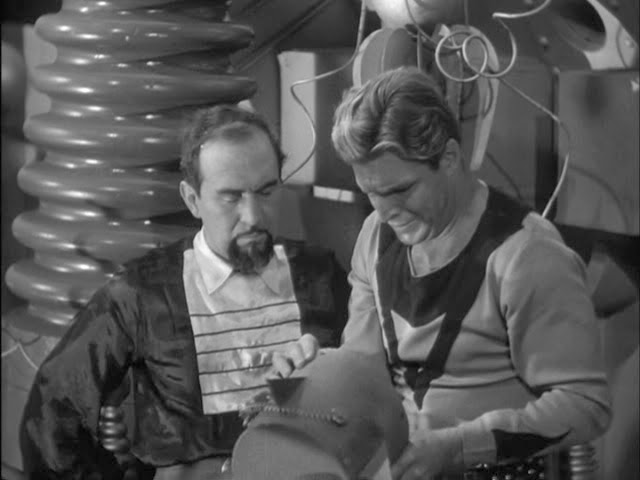 Buck removed the amnesia helmet from Krenko and takes out the hypnotic filament from inside. Buck enlists Krenko's help to remove the helmets from all the robots in the Dynamo Room. I think Buck forgot to mention that he wants the filament removed, not the helmets, to avoid suspicion from the guards? OK, so if the filament was the only thing that made the helmet dangerous, why do they have this massive bucket on their head with fins and wires sticking out of the top? I mean, if the filament could be put in any ol' helmet to work (i.e. when Laska put it in Prince Tallen's helmet), why have something so large and cumbersome? Seems rather pointless to me. And another thing, if when the helmet is removed, that they seem to have no memory of being a robot, how do the 'remember' how to play the part when they are pretending to be a mindless robot (i.e. Robot Krenko and Robot Martin)? 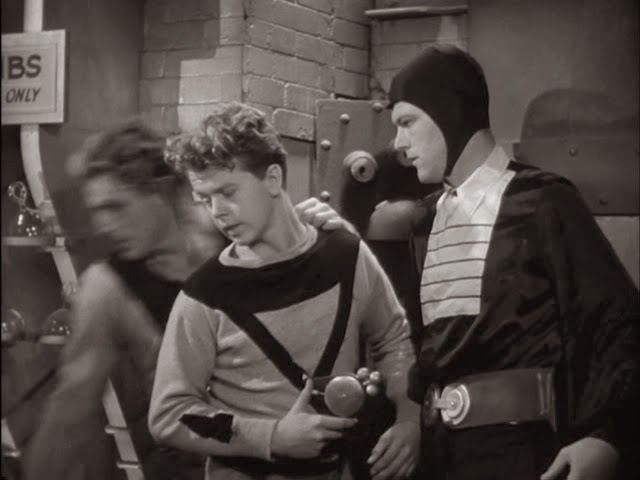 Well, Buddy's negligence to keep his eyes on his prisoner and standing too close to him has finally but him in the butt. The balcony guard makes for Buddy's ray gun. Buck jumps in to help, but the commotion is enough to alert the rest of the guards. Buck pulls a Tarzan and swings down to the floor and helps Krenko in removing the helmets from the rest of Kane's Robot Battalion. They fight. Course, with so many captured men wearing Kane's uniform, how can they tell which ones are guards and which ones are prisoners? Kane addresses his councilors and top men, making plans to attack the secret base of Hidden City immediately. He will send all his air squadrons out tomorrow. Wait, how immediate is tomorrow? And are they not already engaged over Hidden City, which allowed Buck and Buddy to land on a deserted air field and penetrate Kane's Headquarters unnoticed? Kane orders Cartwright to lead the infantry after the air attack. Just then, Commander White radios in to inform Kane that they have lost a 3rd of their ships to the Hidden City forces. Well, now Kane changed his mind. Immediately no longer means "I'll do it tomorrow", now it means, "right now". Commander White is shot down. 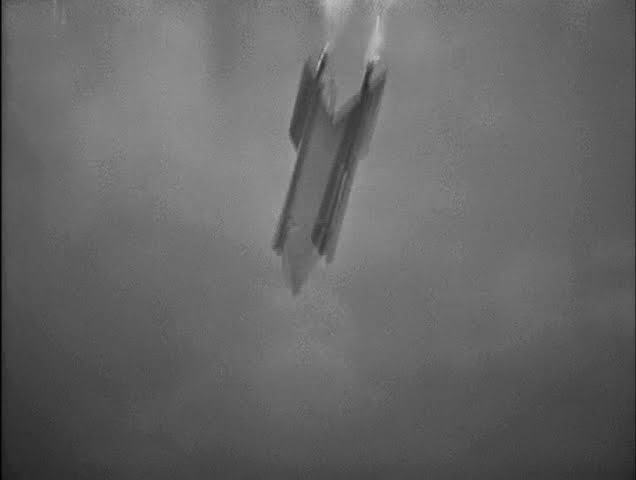 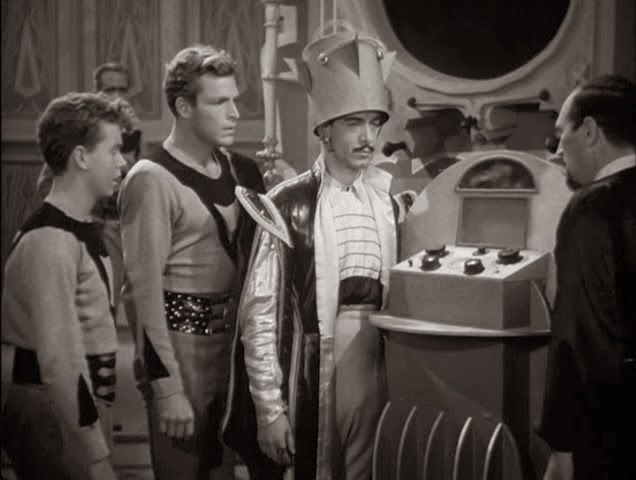 Buck Rogers and a army of newly rehabilitated men force their way into Kane's Council Chamber. Buck gives Kane a fate worse then death, and puts one of the amnesia buckets on him. Kane, now in Buck's control, orders all his outer atmosphere patrols to their flying fields, the clear sign that Kane and his forces have lost the battle. Buck and Buddy fly back to Hidden City. Captain Rankin greets them as they arrive and leads them to the Air Control Room where Dr. Huer and Air Marshal Kregg await them. Kregg offers a award to Buck and Buddy for ridding the World of its fiercest menace. The War Council appoints Buck as Colonel and Chief to be in charge of a new Air Force to be organized from the reminiscence of Kane's Flying Service. For Buddy Wade, the War Council voted him the distinguished Service Cross. In addition (though irregular due to Buddy's age) he is now Flight Lieutenant, attached to the staff of Colonel Rogers. Buck and Buddy start to leave. Kregg, asks Buck to remain. You have not been dismissed yet. Kregg informs Buck that the War Council want him to take up his duties at Kane's at once. 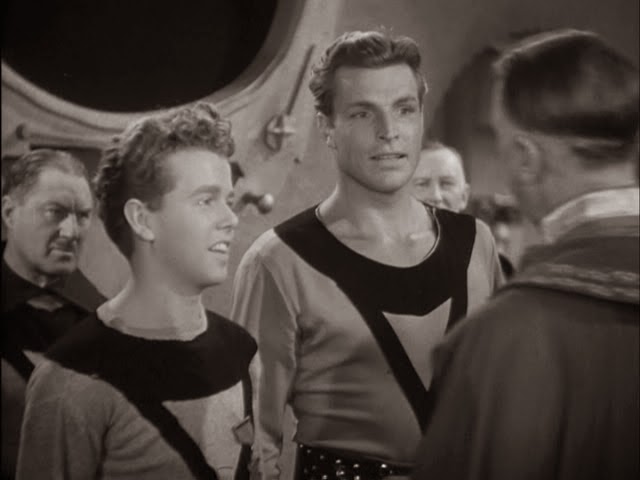 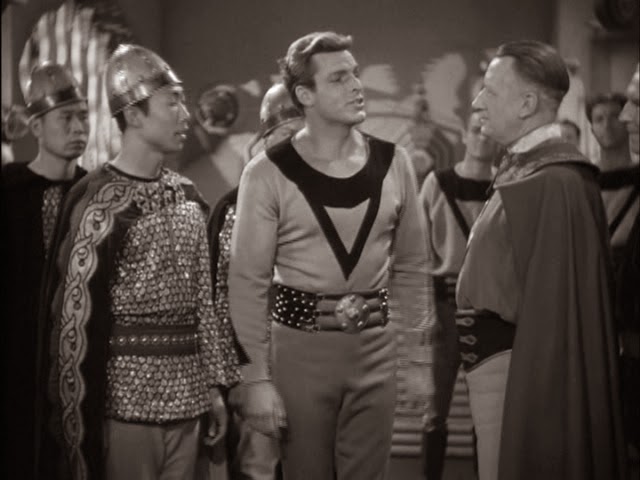 Prince Tallen of Saturn has landed at the Hidden City. Buck is happy to see him. Air Controller informs Buck that another Squadron of Killer Kane's has been spotted by Dr. Huer. Is their celebration premature? Buck heads off to Dr. Huer's laboratory and asks Wilma about the squad. She has no idea what he is talking about. Buddy, sheepishly steps out and says that he gave the false report of enemy ships preparing to attack the base that could have sent everyone in high alert, because he wanted Buck to visit Wilma at the lab ('cause she could not get away, being on duty) so she could congratulate him for a job well done. Buddy steps back giving Buck and Wilma some time alone. Ha ha, they all laugh at Buddies little joke. 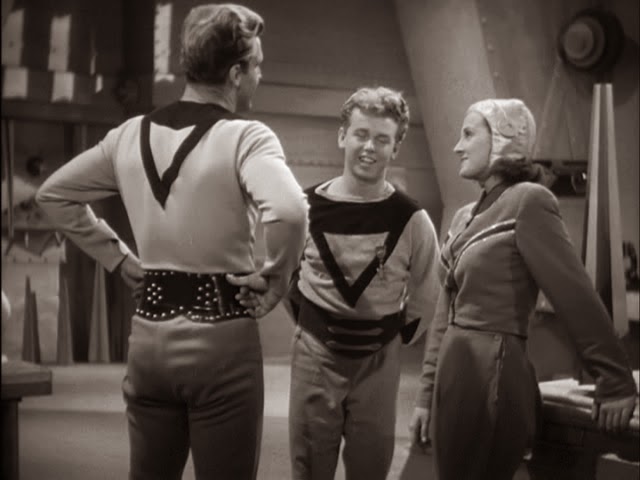