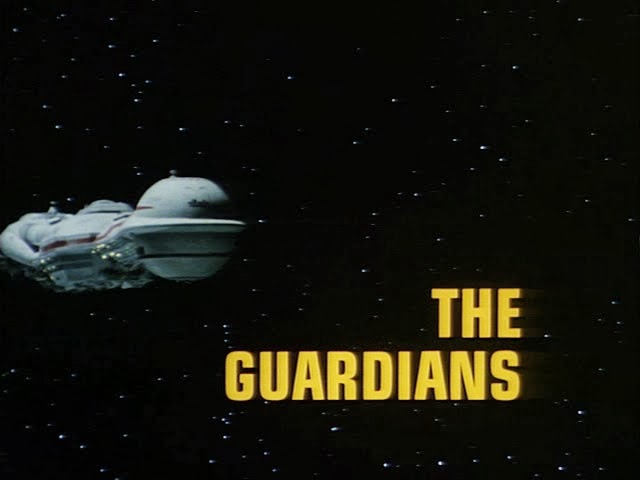 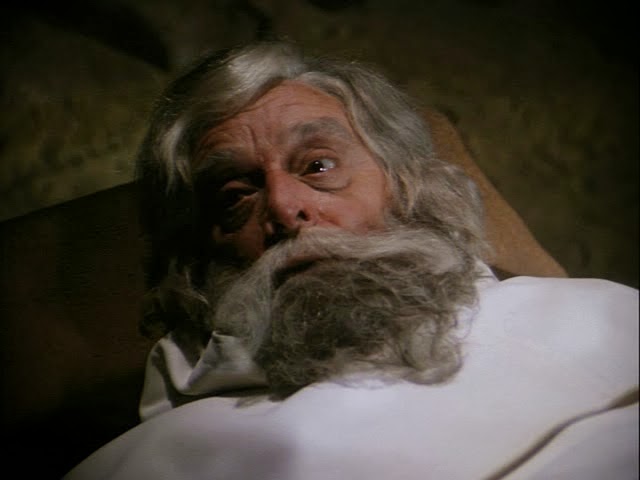 The Survey Team (Buck and Hawk) scout the Terra-class satellite, southern latitudes. The land is hilly with dry grass. Wilma requests an update from Buck. Buck gives the all clear right before a gust of wind picks up, forcing the Survey Team to seek shelter. Admrial Asimov reports that the Searcher will be refueling at the Lambda Colony in three days. From there they will continue to survey the rest of Crusis. Hearing a bell in the wind, Buck and Hawk go investigate. They are led to an open grave with a headstone that reads "JANOVUS XXVI". A little ways from the grave is a cave where they find an old man sleeping on a stone. He informs Buck that he must take the Jade Box to his successor. That only a Man of Past and Present Time can serve as bearer of the symbol. The old man has been waiting 500 years for Buck's arrival. Buck must not open the box as it contains terrible power. Because the old man is dying, he guilt's Buck in honoring his request. Buck now has no choice. He is the chosen messenger. After some good arm-twisting, Buck agrees to the mission. Janovous dies, and Hawk and Buck bury him in the available grave. Buck falls asleep in the cave and ends up touching the Jade Box. He dreams about his last few days on Earth before doing out to space. 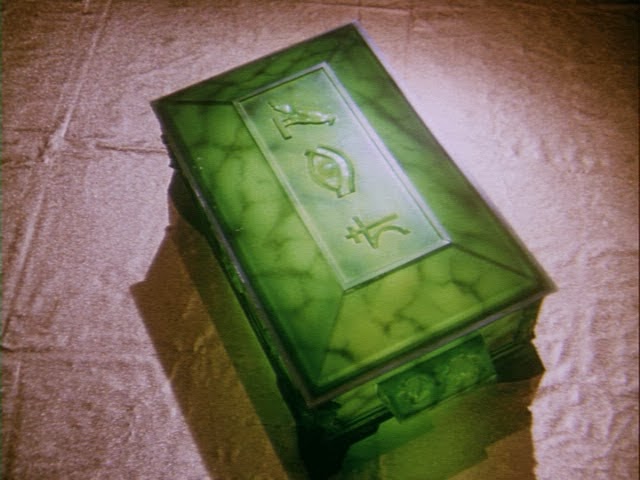 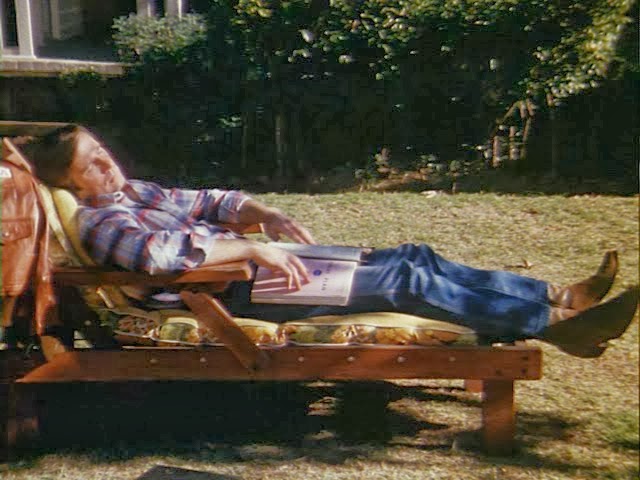 He awakes sitting in a lawn chair, reading a NASA manual. His mother calls to him telling him that lunch is ready. He looks around confused. Now, is this confusion because he is dreaming about the past, or did he travel back in time, wondering how he got here? Is this a 'past' that actually happened, or a recreation of memories pieced together to give the impression that he is somewhere real? Buck was on furlough for two weeks and heads back to work tomorrow. Buck is so confused that he thinks that it is possible that his whole life in the 25th Century was all a dream. So, putting the first and second season together, Buck was at his mothers the morning/afternoon before his last flight, then went back to his apartment to meet Jennifer for dinner. Early the next morning, Buck is flying Ranger 3 through space. Telemetry, Fuel consumption, & timeline all check out. Buck informs Charlie at Mission Control that he wants to try the Automated Maneuver Series. Mission Control denies his request. Buck argues that if they do it now, they will be 6 months ahead. 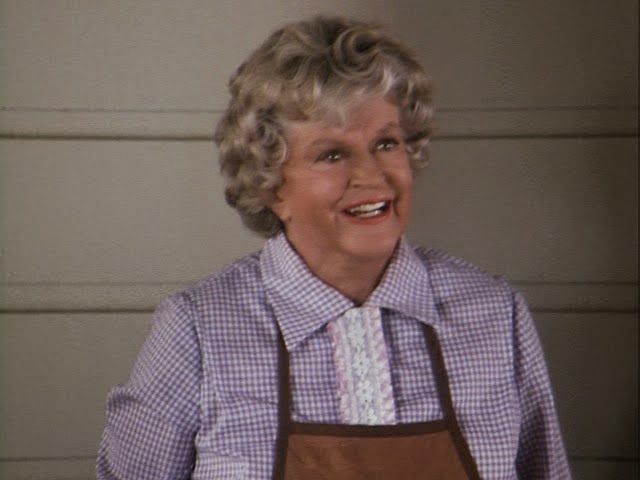 The speed of progress outweighs personal safety sometimes. Charlie gets the O.K. and all thrust systems are a go, but no more than a three minute burn. G-forces hit a 7, and Ranger 3 is still accelerating. No. 3 engine is causing some vibrations. Charlie orders Buck to cut engine three. Buck thinks it's the Exhaust Turbos from 1 and 2. The shuttle beings to roll as he tries to stabilize it. Buck is off course and no longer on Mission Controls scopes. Life support is damaged. Cockpit heating failure. Controls are freezing. Add the exact same FX shots of Bucks Shuttle from The Awakening drifting in space and being shot. Still within radio contact with Mission Control, Buck is frozen in perfect hibernation. 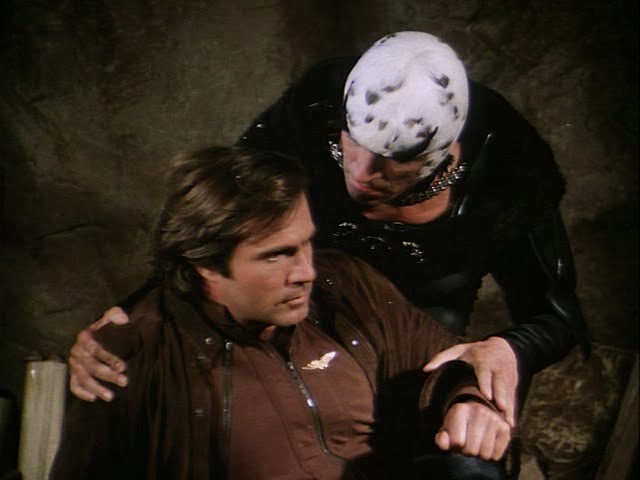 Hawk wakes Buck up. He's back in the 25th Century. What's this? Buck managed to pull the daisy flower from his vision back with him in the present. It wasn't a dream at all. He was really there, and still ended up doing exactly what he did the first time. Doesn't he ever learn? Back on board the Searcher, they head out to Lambda Colony. Helmsman computes the course. 140 degrees cubic, sixth galaxial plane. Buck brings the Jade Box to the bridge and Admiral Asimov has Crichton study it for a possible lead on where it should go and to whom. Dr. Goodfellow is on the case. He has studied the manuscripts accompanied with the box and discovered a theme:

"Ten unknown, humble, righteous souls whose duty it is to preserve the forces of world order.
Each entrusted with a symbol that holds one of the cosmic dimensions in place." 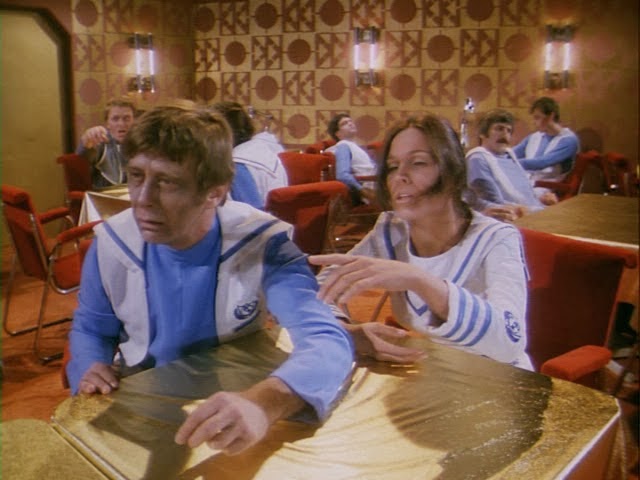 Helmsmen announces that the Searcher has changed course to 359 degrees cubic (219 degrees off course), to the edge of the galaxy. Back on course to Lambda Colony, Admiral is glad to tell Devlin that his wedding can proceed as planned. Devlin is engaged to Dierdre. Her ship is to arrive on Lambda two days ahead of the Searcher. Buck and Hawk enter the mess hall and set the Jade Box down in front of Admiral Asimov, who, disregards The Guardian's warning and opens the box. On doing so, everyone in the mess hall begins to cough, age quickly, then die from starvation. Thank you Asimov! oh, phew! It was just an hallucination. Everyone is fine. Buck charges Hawk to watch the Jade Box, who also opens it. Koori appears to him. Somehow the box pulled her from the spirit world back into the living dimension. Wilma takes the box from Hawk and on her way to the lab, she sees herself wearing glasses, a cape and walking with a cane. She is blind. What does it mean? 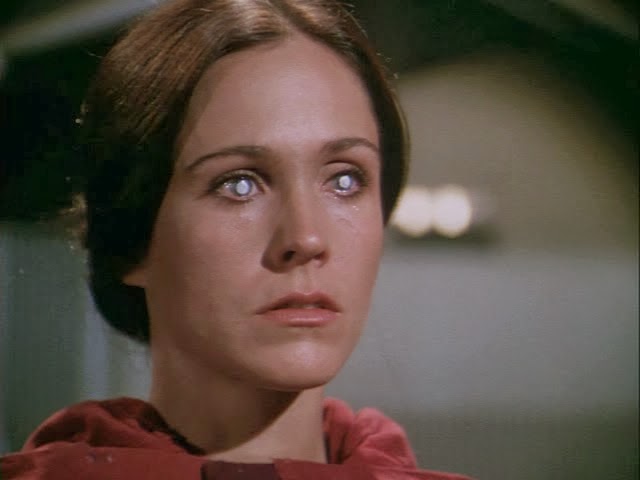 Just like that, Devlin is back on the bridge with Asimov and Buck. Helmsman reports again that the Searcher has changed course back to the edge of the galaxy. I wounder if the Jade Box has anything to do with it? Well Devlin's station is showing that the spectroscopic star fixes are all showing a uniform two-thirds red shift. Whatever that means. "Two-Thirds red shift!?!" Oh no, not two-thirds red shift! They are 508,000 grids away from Lambda Colony and increasing geometrically at a rate of 62 grids per second. At this distance, it would take 132 years to get back to Lambda Colony. The meaning of Asimov's vision becomes clear, if they turn around and head back to Lambda Colony, the entire crew will starve to death before they made it. Wilma and Devlin try to radio Lambda Colony Control. I would be shocked if they could communicate at this distance. Wilma picks up a voice responding to her hails on Subspace band 35.9. She orders full power and static suppressors. Success! They contacted Lambda Colony Control. Wilma tries to tell Lambda that they wont be able to make their scheduled time due to their navigation issues. Lambda Colony is shocked to hear from them. Apparently they are 8 months late and have been officially labeled as 'lost' in space. So, for the crew on Searcher, it has only been a couple of hours. For the men and women back home it has been 8 months, but they have traveled the distance equivalent to 132 years. Cadet Dierdre Lasalle (Devlin's fiancee) was on board a rescue vessel to find Searcher, but was killed when the ship crashed six months ago. 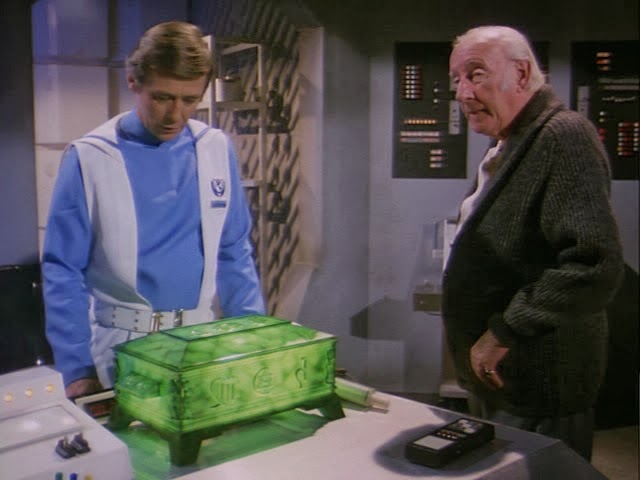 Dr. Goodfellow is working on the Jade Box. He voice records his findings: Apparently the Yttrium laser beam is useless. 100% of all energy was deflected. Something that should be impossible. Devlin enters the lab and plans on destroying the box. Devlin feels the box will bring damnation to them all, when ironically destroying the box is more likely going to bring damnation to them all. Wilma enters the lab and tries to stop Devlin. Devlin drops the box causing it to emit a light so bright, that it blinds Wilma. Now we see the meaning of her vision. Asimov talks to Colonel Deering like a little girl "What is it child?" Is that how an Admiral speaks to a Colonel while on duty? Well, a crying woman is all Asimov needs to finish up where Devlin left off. Let's make Wilma's blindness be in vain and destroy the box that she was trying to save. The box is launched into space...then disappears. Helmsmen requests the Admirals presence on the bridge. There, sitting in the Admirals chair, is the Jade Box! Like a nightmare, it is back to reek more pain and destruction on the crew! With nothing to loose, and no other choice, Asimov finally agrees to allow the box to take them where it is piloting the ship. About time! 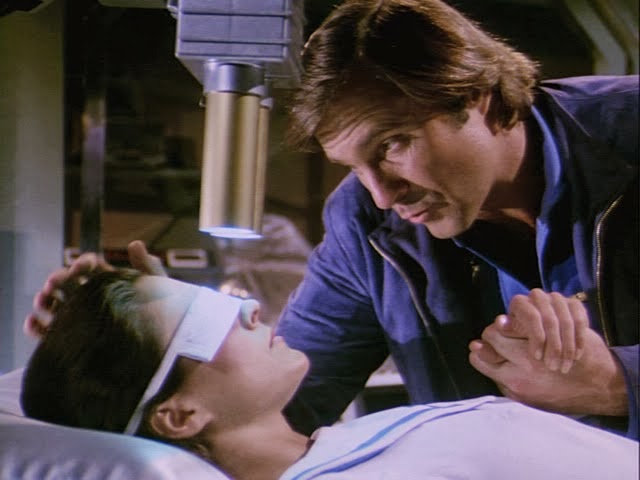 Blind as a bat, Wilma rest in bed. Dr. Goodfellow has done all he can to save her sight. But without surgery, she will be permanently blind. Buck and Devlin both come to her bed side and try to give her hope, here, in her darkest hour. The Searcher changes course again, five degree's off axial. Red shift now at 9/10ths. Twiki and Crichton come with the report regarding the ships stores. They are down to two weeks left of food, fuel and medicines. This comes as a shock as only three days ago they had 18 months of stock left. Dr. Goodfellow quotes Shakespeare's, Julius Caesar, "The fault...is not in our stars, but in ourselves" in response to Asimov's belief that the box is evil. Buck explains the purpose of the box's visions. His vision of his mother was the problem with pride, and Hawks vision showed him it was wrong to change the order of life. Wilma lashed out of Lt. Devlin in anger and lost her sight. The Searcher is brought to a Terra-Class system, er, planet. Resume stations everyone! Wilma heads to her consul with no sight issues. The Holo scan pattern shown on Wilma's screen suggests a building or large structure. Hawk, Wilma, and Buck take the shuttle down to the planet. 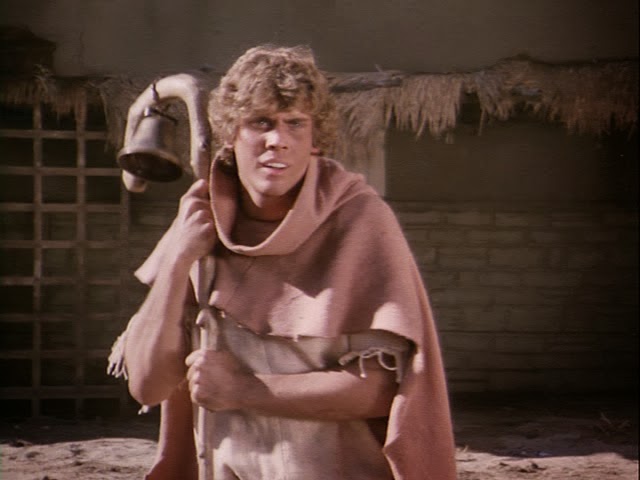 They arrive in a ancient town that they think must be hundreds of years old. It has an ancient Egypt style to it. Very reminiscent to the hieroglyphics on the Jade Box itself. There, in the center of town, like a monument, is the tombstone of JANOVUS XXVII. Apparently he died before Janovus XXVI. Don't they go in order of successor? Oh, there is life here after all. A limping Shepard with a bell on his staff enters the deserted town. Hmm, just like the bell over Janovus's grave... Startled, the Shepard tries to run away, but Buck assures him that all is OK. He, is referred to as the Lame-One. He brings his sheep here often, but his home is over the hills and through the woods. Buck is discouraged that his lame-one couldn't be who they seek. An earthquake shakes the ground. An explosion erupts from no were, opening a chasm that the Lame-One falls into. He is gone. Talk about being at the wrong place at the wrong time. 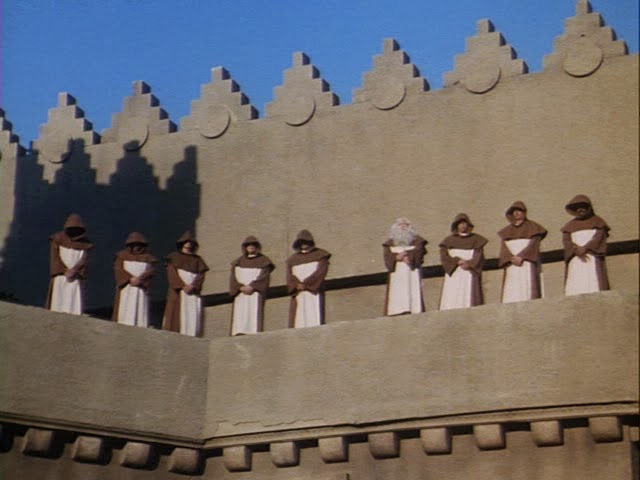 Just then, nine monks materialize on the wall, and thank the people of Searcher for helping them discover the 10th power. The 10th guardian is finally in his place and has been delivered the symbol of time. So, what, was this some kind of test for the Lame One or Buck? Why would the Guardians need proof of compassion and sacrifice? Doesn't make sense. 1st Guardian announces that everything should go back to the way it was before everything went haywire. Back on board the Searcher, their ETA to Lambda Colony is 1430 hours (2:30pm). Back on scheduled. Speed and food is normal. Communication is normal, and time is back to normal. Even Dierdre is alive and waiting on the ramp for Devlin. All is back to normal. Yeah! 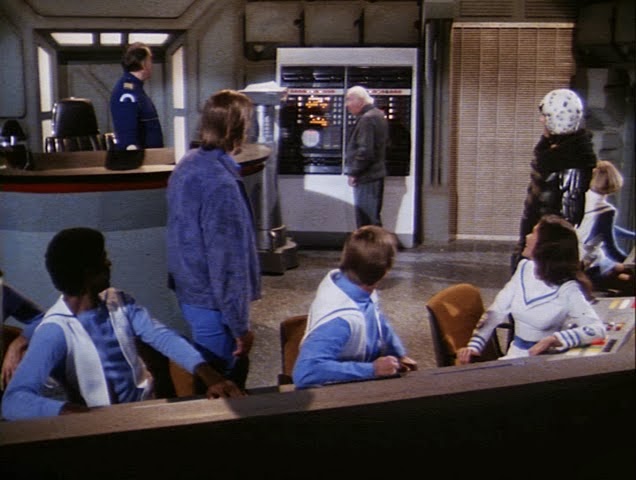