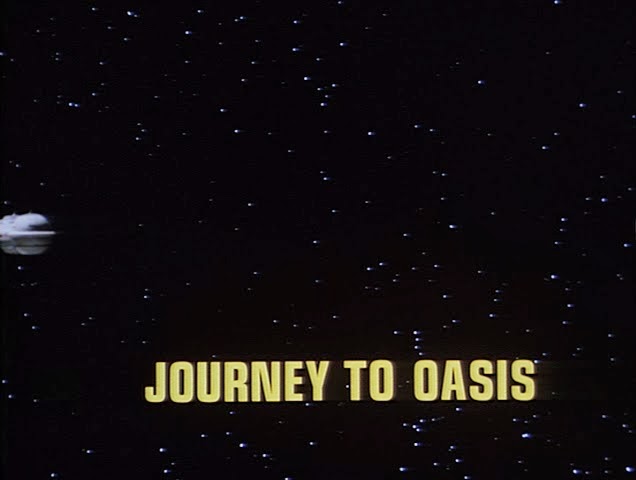 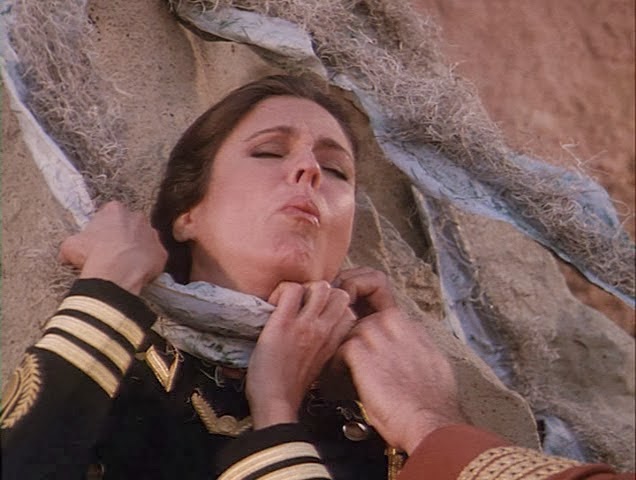 Oh man, Aram and Wilma are discussing old times. Feelings inside Aram that have been long forgotten are starting to stir once more. Like wise, Wilma is feeling those same emotions bubble to the surface. Will they disregard their careers as Colonel in the Earths Directorate, and peace Ambassador in the Zykarian government to run off together to live happy and fulfilling lives? I think if Hollywood ever rebooted Buck Rogers, Patrick Stewart would be good for Aram Duvoe. Little does Wilma know, but she sat down right next to a giant Lichen that begins to strangle them both. Buck comes to the rescue. Goodfellow is excited about the discovery of the lichen and naturally wants to study the dangerous  fungus, paying no mind to the near death situation that Wilma and Duvoe where just in. With no time to relax, Atavar huntsmen launch spears down on-top of the Team. Thank you Atavar's for the Spears! They needed some weapons in this dangerous place. Where is Ambassador Duvoe? The strangulation from the lichen caused Duvoe some distress that he was forced to remove his head to readjust himself. Unfortunately, Buck discovered the Ambassador with his head off. Buck looks at Duvoe like some kind of monster or that the fact that Zykarian's can remove their head is a dirty little secrete. Buck almost looks at Duvoe like head removal is some kind of crime, or sin that Duvoe must apologize for. "Does Wilma know that you are one of those kind of people?" If she knew, she might not accept him. What a nice prejudice the show is teaching viewers when it comes to those who are different. 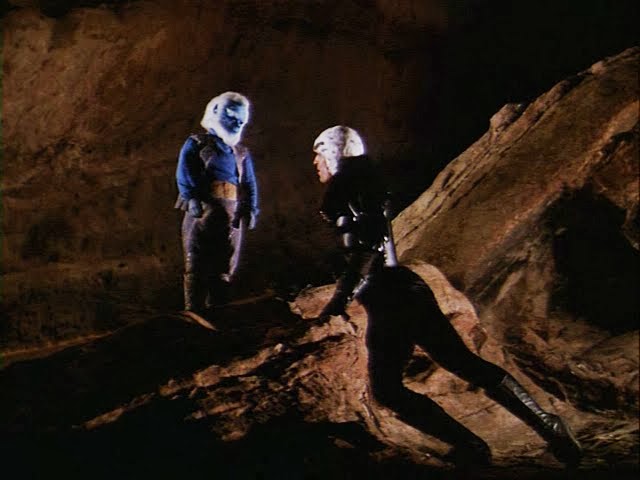 As night falls, Hawk requests that he stay behind to capture Odee-x. Buck agrees. Odee-x however puts a sleeping spell on Hawk, then snuggles up to him. How weird...and creepy. You know, for someone who has always eluded being killed by the Atavar, he has been taken unawares twice now by Hawk. He doesn't seem as careful as he said he was. Buck and Wilma have a little pow-wow, where Buck implies how wrong Duvoe is for Wilma because he can remove his head. He is clearly an evil person. Wilma puts Buck in his place. Something that I wouldn't have expected giving Bucks prejudice free attitude in the first Season. 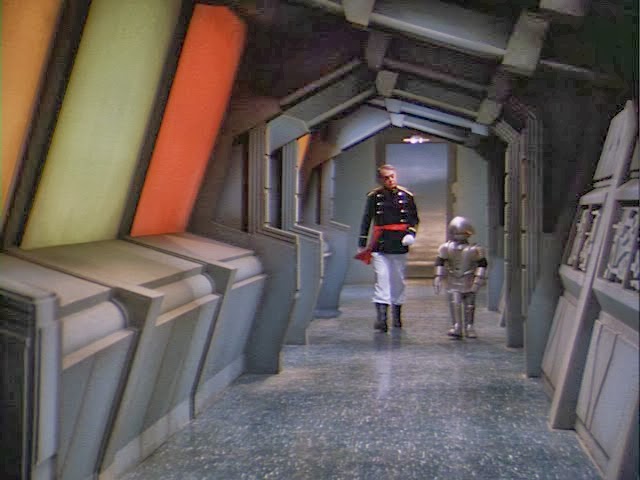 Admiral Asimov is just about to welcome Admiral Zite to the Searcher for dinner when he is called to the Bridge. Ensign on station informs the Admiral of new Zykarian Battle Cruisers arriving off the Searchers right flank. The cruisers are all targeting the Searcher with Photon Cannons. Admiral Zite and Raka join Asimov and Lt. Devlin for dinner. Zite agrees that he will wait till the Ambassador fails to report at Oasis before he open fires on the Searcher. Raka sure has poisoned Zites mind with conspiracies of war and kidnapping. Underground landing pads and ransoms.

Odee-x wakes up, and takes off, laughing as he goes. Why did he sleep with Hawk? Safety? Warmth? It still just seems weird to me. Oh, and how come no one has mentioned that Hawk never returned to camp last night and is still missing this morning? Should they not be worried about that? Wilma and Duvoe happen across the heads of Duvoe's people...I mean...the heads of people killed by the Atavar. This must be the shrine Odee-x talked about. Speaking of Odee-x, Hawk is still hot on his trail. He finally catches up to him on the mountain. Hawk asks for his help but Odee-x refuses. Odee-x is low on power but it refueled my the magnetic storms. Ut-oh, time for another riddle 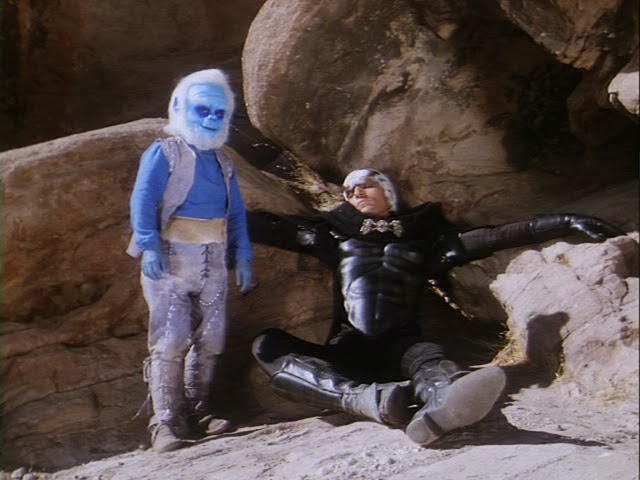 "To best Ezarhaaden, and seal his fate,
give him the point of your argument straight"
Hawk catches up with the rest of the team, and they make their way to the Cave of the Winds. It's a good thing to, seeing how they are trying to avoid the deadly Atavar. Wait...huh? Isn't the Cave of the Winds the Atavar lair? Doh! They enter the caves anyways and find a skeleton that is embedded in the rock. They assume the winds in the caves are so strong that they could blow someone into stone. The skeleton has a curious cut line along the skull and a white discoloration on the side where a clasp may have been...did the prop department take a medical skeleton display and use it for this scene? The Atavar follow them in the cave... 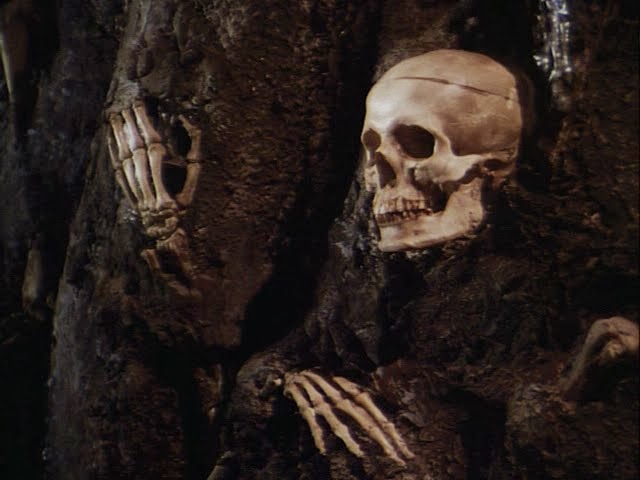 The escort team hits their first obstacle, an invisible wall. The pike, or spear, that Buck is caring goes right through this invisible wall, but for some reason, organic people cannot. This is the trap that isn't there. A wall that is in their imagination. All of their imaginations, simultaneously, and without knowing they were thinking about it. Ooo, Hawk see's a lever. Buck uses the spear to try to pull it. No luck. Goodfellow, realizes the first riddle told them that conscious thought would not allow them through the wall. So they need to have unconscious thoughts. Or rather, no thoughts. Goodfellow chooses Wilma as his guinea pig and hypnotizes her to be thought-less. He instructs her to walk through the wall and pull the lever. It worked! Thanks doctor for choosing the woman to put herself in danger to save the rest of them! Odee-x, however seems to be a little put off that his riddle wasn't obscure enough. So, he wants them to enter the cave, and make it out, but wants to make it more difficult for them? The team come across a bridge, and on the other side are poisonous snakes. Buck decides that he will cross the bridge first. Why not let Wilma go first? Dr. Goodfellow I am sure would agree to that suggestion. 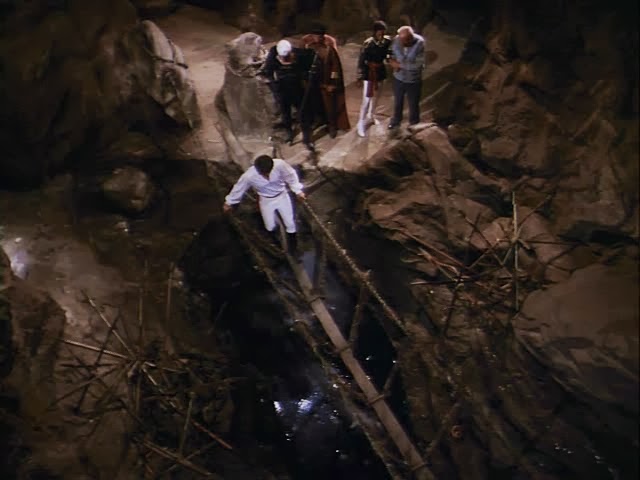 Buck tried to cross the rope bridge while everyone throws words of caution at him. The rope begins to snap, and Buck looses his balance. Hawk grabs on and tryied to steady the bridge. Wilma makes an attempt to help, but Dr. Goodfellow holds her back. "No, my dear, stay here by me, you're just a woman". Buck manages to regain his composure on the bridge despite the hard winds in the caves. Once Buck manages to make it to the other side, a lightsaber, wielded by an invisible knight, comes out of the darkness and challenges Buck to the death. Hawk tosses Buck the spear for defense. A little fast forwarding action heightens the scene. Ezarhaaden pushes Buck back to the bridge and cuts the rope holding it up. Just then, Odee-x comes out from behind the rocks and taunts Ezarhaaden, distracting him long enough for Buck to pull himself to safety. Ezarhaaden fatally wounds Odee-x. Think guys, what is the meaning of the second riddle? Use the point of the spear! Yes, 'cause Buck would have used the dull end of the spear to try to kill Ezarhaaden if you have not given that advise. Oh, aim for the Heart! Sure, the heart of an invisible man. Thanks again guys! Well, Buck uses the spear as a spear and spears Ezarhaaden with it. Tada! Buck killed him. 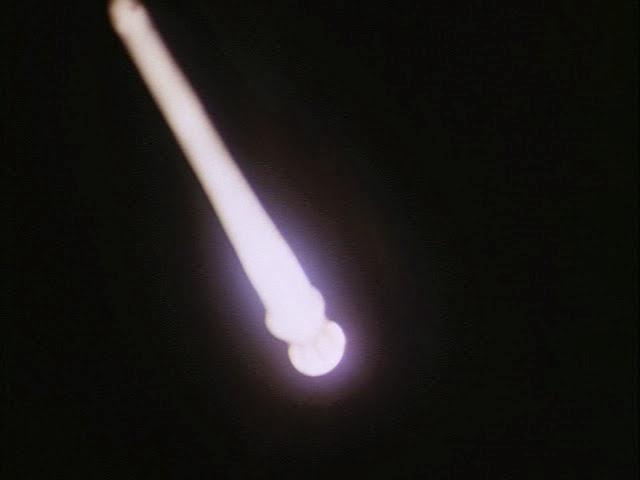 The Zykarian ship docked with the Searcher moves off to give the Battle Cruisers a clear shot. Ensign Rollo indicates that the cruisers are only an 1/8 of a quad from them. Asimov informs Lt. Devlin that he wants to rig the Searcher to be a booby trap, that will destroy the Searcher itself, the four Zykarian ships and everything else in the quadrant. If you're going to go, go with a bang. Odee-x explains that Ezarhaaden has been his nemisis for years and needed a champion to defeat him. Buck was that champion. It all makes sense now, the foreboding warning to stay away from Ezarhaaden, the cryptic riddles confusing Buck, the desire to make his riddles more obscure... all for Buck's help in defeating Ezarhaaden. I mean, otherwise his riddles would have gone to waste, and made an unfair fight against Ezarhaaden. Thanks a lot Jerk! Odee-x throws the lightsaber into the water. Now, another riddle 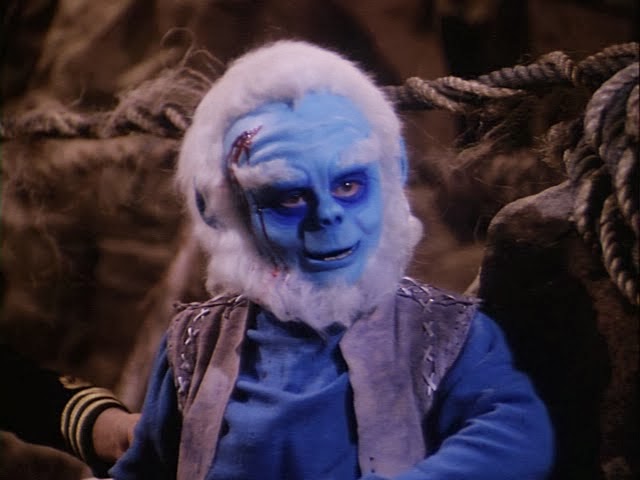 "When Death is sure, no way out,
an angry god puts death to rout"
Buck shares my sentiment. Just want to throw Odee-x in that pool of stuff for all his riddling. They all leave Odee-x behind, who despite all his assurances, I can only assume isn't fine, and dies from his wounds.
"To save your lives, remember me,
and most of all, my riddle three" 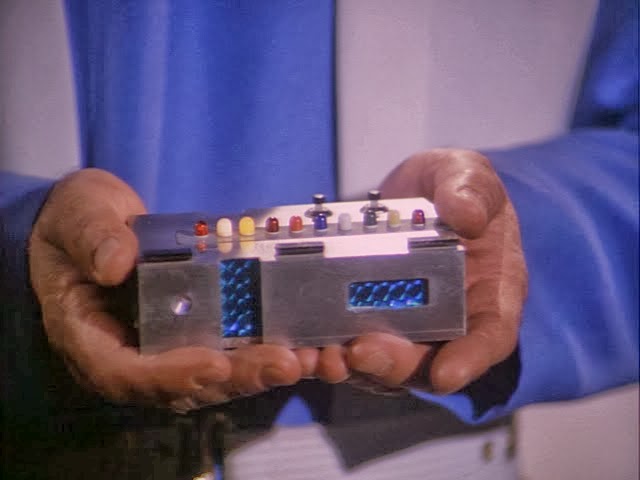 Lt. Delvin brings in the relay detonator for their photon core. Once activating the Searcher will have the destructive power as an exploding star. Admiral Zite is prepared to give the order to open fire, as the deadline is only a couple of hours away now. With the Spires of Oasis in site, the escort Team are surrounded by the Atavar. They are not out the woods yet. The only way out is to remember Odee-x's third riddle. The one about an angry god. It's Return of the Jedi all over again when C3P0 posed as a deity and saved the Han Solo from the Ewoks. Duvoe pulls off his head and shows it to the Atavar, the worshipers of heads, and becomes their angry god. Now, Duvoes dirty little secrete is out for all to see. Duvoe warns the Atavar in English, but who is to say that all their grunting and moaning isn't their language? There is nothing to support the idea that the Atavar understand Duvoe's threats. Wilma looks heart broken. How could the love of her life be such a freak? She balls up in tears and cries on Buck's supportive shoulder. But it's not judgement in her eyes, just shock, right? 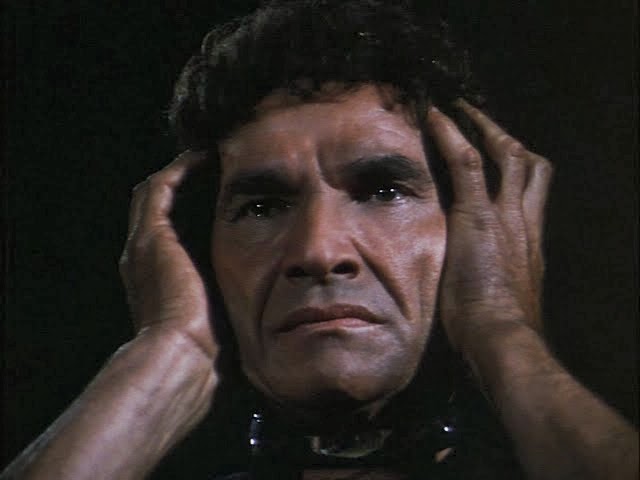 The Ambassador makes it to Oasis on time, and delivers a memorable speech, uniting the Zykarian's and Earth together in peace, plus the other nations in the system. "We must learn to know each other. Ignorance breeds suspicion. With communion comes knowledge and understanding." Something to take to heart there Buck and Wilma when thinking about Duvoe's symbiotic condition. Dovue goes back to his ship and Wilma and Buck see him off. 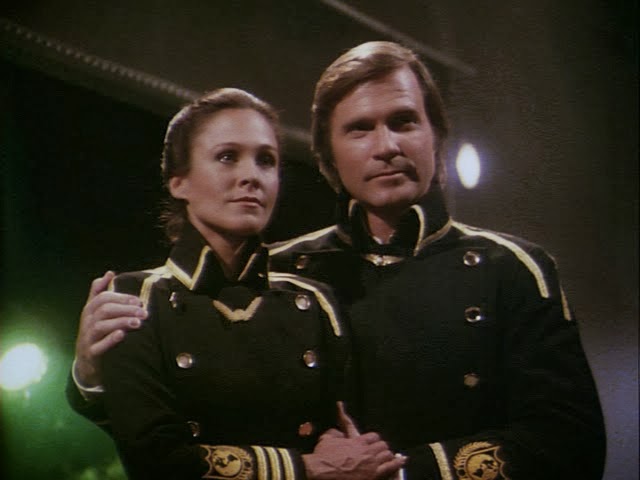