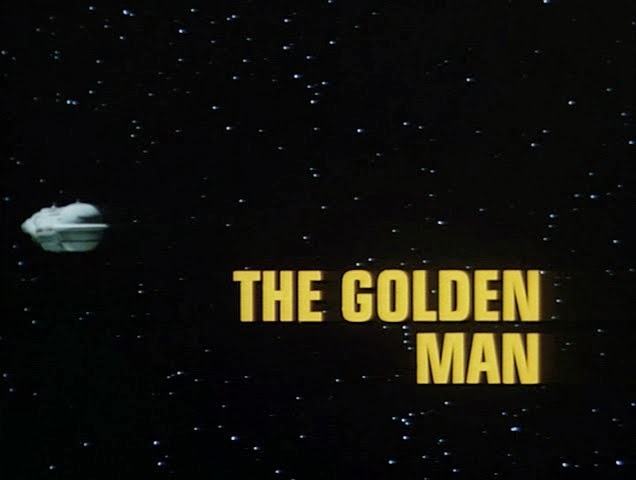 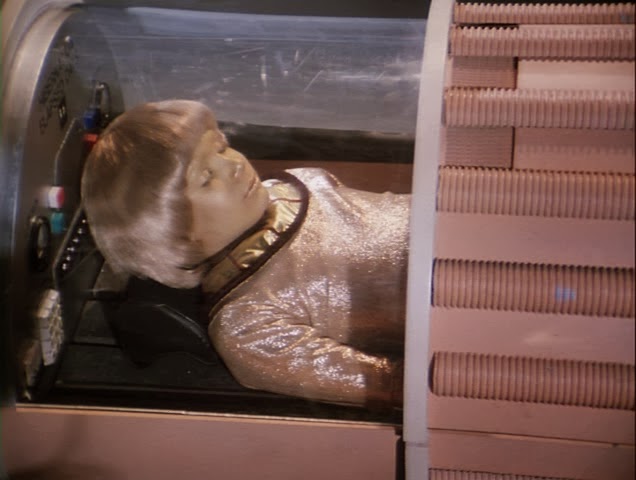 The Searcher enters the Alpha Centauri Asteroid fields, the densest field they have ever seen, in response to a distress signal. In additional to the asteroids, there are magnetic storms that are fouling up the ships scanners. The distress signal is coming from a pod at coordinates 3-5-Delta. Asimov orders the ship to intercept at four degrees starboard (aka to the right). The Searcher locks on to the life pod and tractor beams it into the airlock. Buck and Hawk open the pod to reveal a Golden Boy. I thought the title was the Golden Man? Anyways...shouldn't there be a doctor on hand just in case the boy is alive and needs medical attention? Why are there no protocols about opening and reviving an unknown species from hyper-sleep? Did the Golden Boy's hand positions change from at his side to folded on his chest? 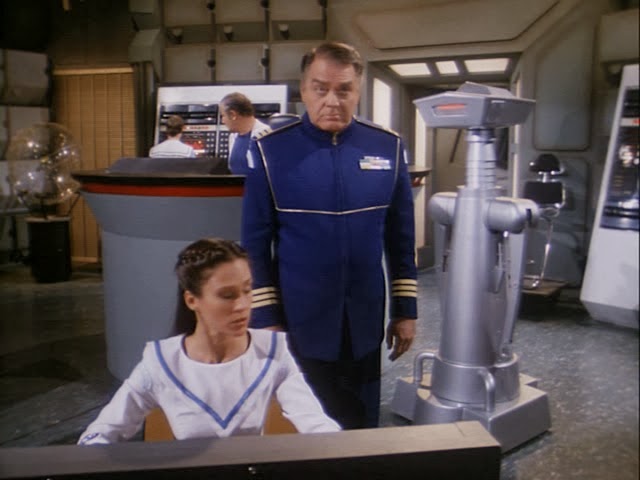 Dr. Goodfellow indicates that the boy is perfectly normal, but when he awakes, they want him to lie still like he needs his rest. What's that about? The oxygen indicator on the pod shows a two week depletion. The boy goes by the name Velis. Some how Velis got separated from his companion, Relcos. Velis gets excited that Relcos appears to be missing. Hawk and Buck both shush him to stay calm and rest, like a little boy. On the bridge of the Searcher, Wilma picks up Relcos life pod distress signal on the planet Iris 7. A magnetic field is headed to the Searcher, and will hit them in 60 hours with a destructive force of at least 9.5 on the standard scale. What scale are they referring to? A bomb? Earthquake? Whichever it is, it must be big. 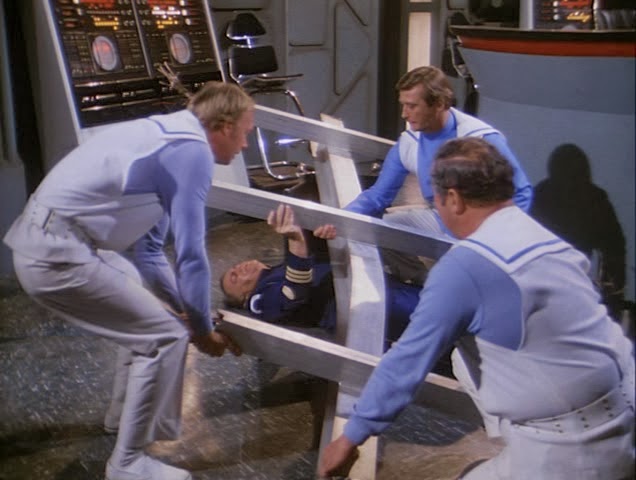 Dr. Goodfellow indicates that the existence of a golden people has always been considered a myth for centuries. Kind of like Hawks race of bird-men. What are the odds that the Searcher has proven the existence of not one, but two fabled species within a single year? Whoops! With the view shield closed, the Searcher didn't know where it was going and crashed right into an asteroid. Velis is jolted out of bed and heads to the bridge where he finds Asimov under a huge metal beam that fell from somewhere (the ceiling?) in the crash. Buck, Devlin, two other guys and Asimov all try to lift the steel beam off Asimov. If four grown men cannot budge the thing, them I am guessing this steel beam weights in excess of 700lbs and probably would have killed Asimov if it really landed on him. Velis places his hands on the fallen debris and up it goes like Styrofoam. Asimov gets up completely unhurt. Not a broken bone, a collapsed lung, not even a scratch. It must not have actually landed on him, but around him. 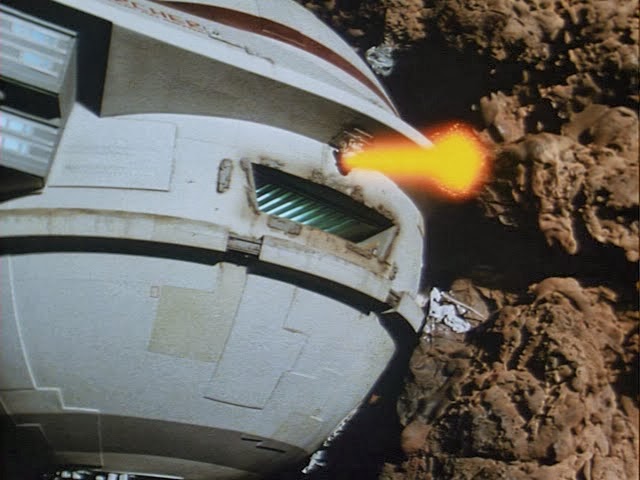 Report from the engine room indicates there are no serious casualties. Inspection of the forward compartments revealed extensive damage to Sections 2, 3, and 4, but self-sealing has held. Asimov orders to energize the reverse tractor beams on full. So, they want to push themselves way from the Asteroid? Hawk engages the reverse thruster beams instead. With risk to burning out the fusion reactors, Hawk increases the beam into the red. With a lot of shaking inside the bridge, the ship doesn't move at all. Asimov orders the tractor beams off and Hawk confirms that the thruster beams are off. Velis assures that if the Searcher was to locate his buddy Relcos that he would be able to make the ship lighter to free them from the asteroid. Asimov agrees, and Buck and Velis take a shuttle down to Iris 7. 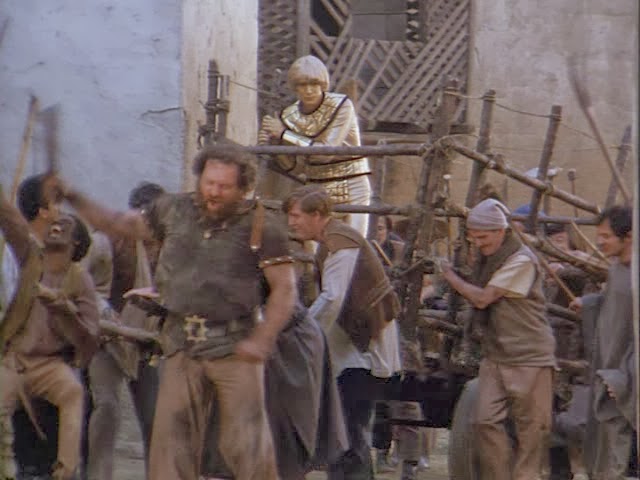 Relcos has been taken prisoner by Loran and a pitch fork and torch wielding mob. Relcos was found in his lift pod down by the river. The mob believe that he is really made of gold. I guess the gold makeup is supposed to be more realistic gold then what we see on screen. Loran brings Relcos to the center square where there is a makeshift jail waiting for him. Loran releases Hawley from the jail to make room for Relcos. Loran points his rusty blade at Relcos, threatening him. Relcos grabs the blade and turns it into jade. Not sure how a jade knife is less threatening that a dull rusty metal one.  Oh man, the voice overs remind me of a Disneyland Park video going through the Pirates of the Caribbean. Relcos turns the bars to glass and breaks out the of the little jail. The crowd shouts that he must be crazy. I mean, why would anyone want to escape from a violet mob of men and woman who took you captive with weapons, and are constantly poking and taunting you? He must be crazy to want to escape that. 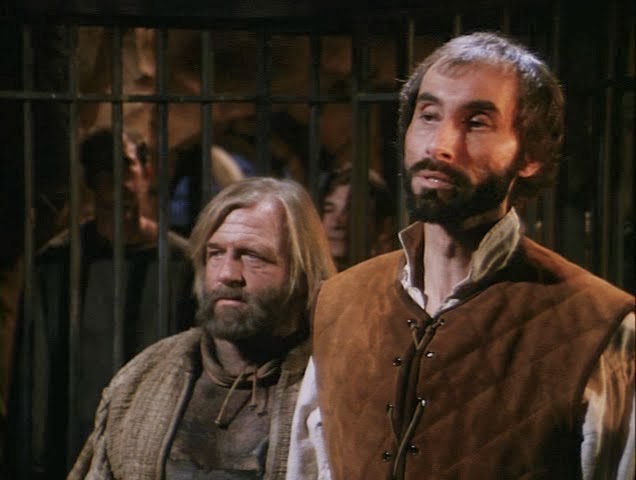 Buck enters the town to find everyone running around all excited. Trying to hide and not attract any attention, Buck and Velis are quickly seen and surrounded. Buck uses his fighting skills and attacks his assailants, but is quickly overwhelmed and placed in a more solid jail. Strange that a penal colony would have a jail. Mr. Graf (another cameo from Season 1, Anthony James, who played Varek in A Plot to Kill a City) questions Buck on why he is on Iris 7. He is charged with bring a weapon inside a Penal Colony. Graf takes Velis away from Buck, and brings him outside where there is a emergency dispatch ship that crashed 5 years ago and cannot fly any more. Graf want Velis to reduce the weight of the ship by half so the one remaining engine will be able to lift the ship off the ground and into space. 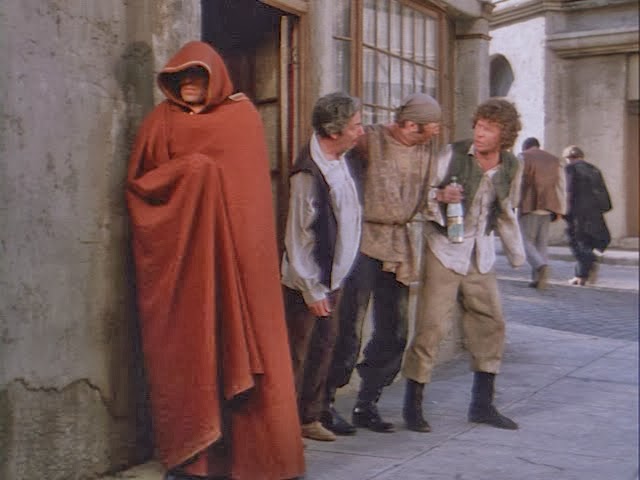 20 hours later, and miles away in space, the Searcher continues repairing bulk heads and other things. In all this time, they have not head a word from Buck. How long will they wait till they think something is wrong? They only have 40 hours left before the magnetic storm hits their ship. Dr. Goodfellow finds out that the planet Iris 7 is in fact inhabited, and with prisoners no less. How can Crichton have been so wrong? Hawk takes the initiative and flies down to the planet to help. Relcos wakes up in a pile of hay and is discovered by Marcos. He offers Relco his lunch and they have a Kodak moment together. Buck and Velis trick the Jailer into sticking his arm in the cell. Buck threatens to rip it off if the jailer doesn't surrender his keys. Hawk wanders into town incognito wearing a huge and bright colored cloak and hood. He certainly wouldn't catch my eye as being weird. Mr. Graf offers 1,000 gold solaries to the one who brings him the Golden Man (Relcos). Now if they believed Relcos could change anything into gold or silver, then 1,000 gold solaries isn't a lot as a price for someone who can make unlimited gold solaries. Hawk walks through the crowd and onto the stage. He introduces himself as Kordis Hawk, Inspector General of the Retributive Justice Council. Hawk demands the release and surrender of Buck and the Golden Boy along with the missing Golden Man. Hawk threatens the crowd that there is a battle cruiser orbiting the planet and will attack if he or the others are harmed in any way. 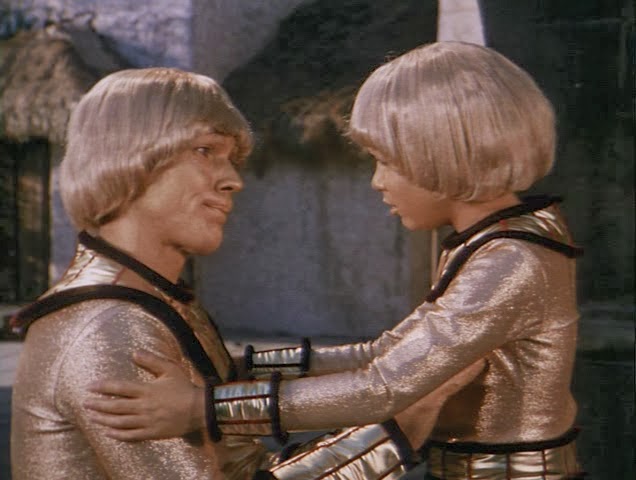 Hawk finds Buck and Velis first. Hawk sees a 'gold' man in the window above them. A quick inspection reveals a Hag trying to paint up Alphie to look like the Golden Man in hopes to swindle people in believing he is the Golden Man. However, the real Golden Man is being paraded down the street to the damaged ship. Graf forces Relcos to make the ship lighter. Hawk interrupts the Graf and his attempt to escape the planet. Unfortunately, Hawk gives himself away when he demands to know who shot the ship down. It would seem that the Federation and everyone else knew that it was a legitimate accidental crash. He makes a run for it. Graf is too smart for the average colonists and heads Buck and them off at the gate out of town. Four against two. The colonists are clearly out numbered. Buck and Hawk take them all out with no effort at all. All on the other side of the gate, Relcos and Velis fuse the gate closed. The bars get so hot that they turn red. Isn't Buck holding onto the bars? 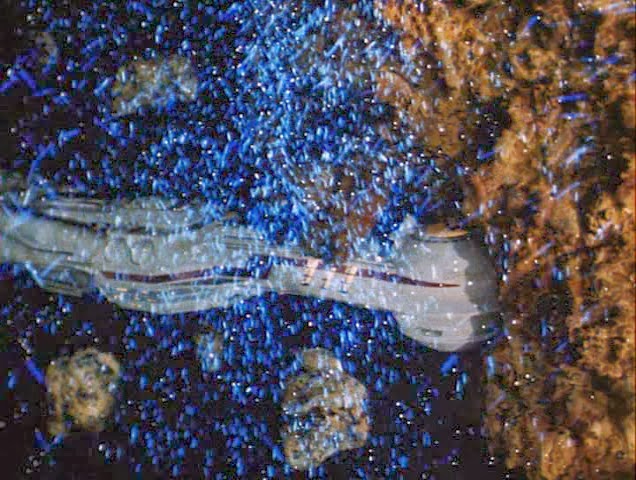 The magnetic storm has finally hit the Searcher. Funny how it looks like it is snowing in space, with a heavy breeze no less. The storm is getting worse, life pods are ready just in case they have to abandon ship. Velis encourages Relcos to lighten the ship. Ironic that Buck and Hawk prevented Relcos from lightening the ship for Graf so he could escape, only to bring him to the Searcher, where they want Relcos to lighten the ship so they could escape. In both scenarios, it seems that if he doesn't do what they ask, he will die. After much work, the Searcher finally manages to break free from the asteroid. The bow pressurization is three standard atmospheres. No major structural damage. Everyone is alright. A shuttle from Vela 5 docks with the Searcher to take Velis and his son, Relcos, back home. 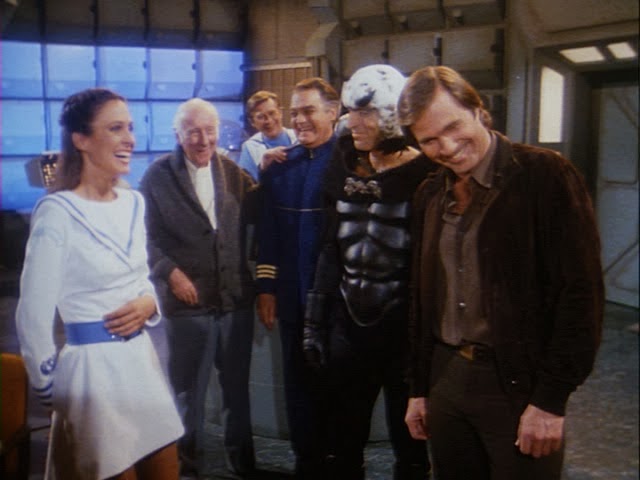