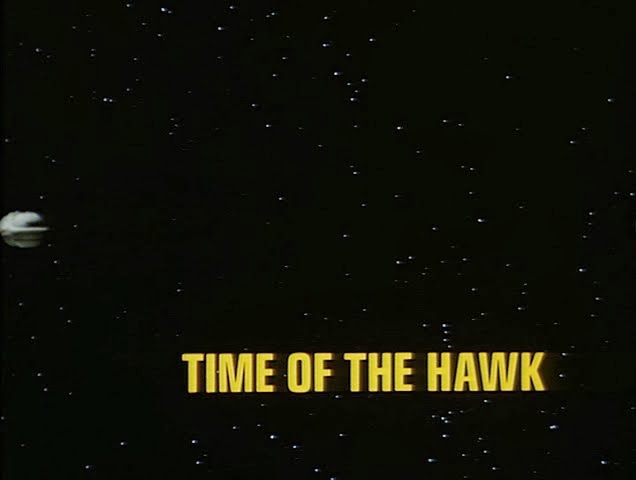 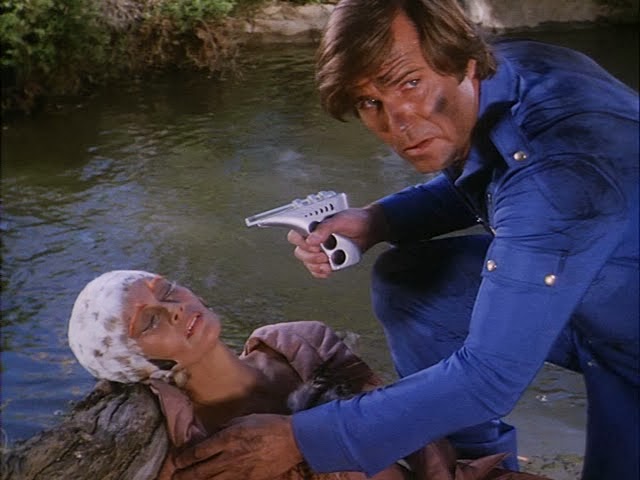 After the two ships crash, Buck managed somehow to open the Starfighters hatch and remove Koori before Hawk was able to get out of his ship. Buck calls for Hawk's help. With their powers combined, they just may be able to help Koori. Buck grabs the med-kit from his ship and uses a spray on Koori's wound. They carry Koori to Neutralis in search for a Healer. That is quite a walk. A full day in fact. Kind of makes them wish they still had a functional ship. By night fall the three take shelter in a cave to rest. Here Hawk spills the beans on the history of the Bird-Men. Tens of thousands of years ago, Hawks people were on Earth. Easter Island (before Atlantis fell) to be more specific. Back then, they had wings. Living wings. For a hundred thousand years they lived in peace on Earth. Then 'man' arouse and brought conflict into the world. The Bird-men where then slaughtered. Some escaped to Throms. Being so frightened of being different, the Bird-men and women bred the wings out of their next generations. Now, they are no longer capable of flying, and are more human than bird. Buck and Hawk finally start to understand one another. 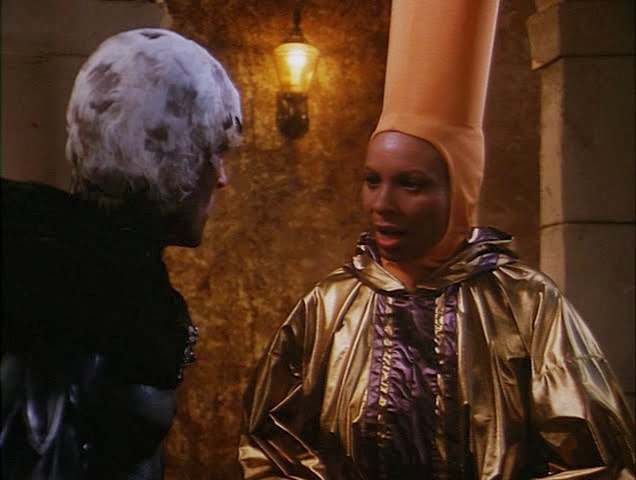 The next morning they are back at it. Hawk finally gives in and allows Buck to carry Koori. They make it to the city Neutralis by night fall. I guess it was more like a day and a half walking distance. Koori is brought to Thordis and his posse for help. Thordis brings them to the Healer, Thromis, who tells them she cannot help. Thanks for nothing. Now, they have to take Koori to the Lamajuna, an old man living on a mountain in the South. Thromis tells Hawk that the Lamajuna's god is Vishnu. Hawk is encouraged by this as Vishnu's companion (mount) is Garuda, an eagle. Time for more walking across the terrain. Seems like the smart thing to do is find a transport while they are in town rather than walk the distance. I cannot image that caring Koori like this is helping her condition. If anything it is making it worse. What? Hello Flagg, what are you doing here? Didn't Thordis say Flagg's ship would be ready in 48 hours? It's been like three days going on four since Buck first met Flagg, what is he still doing here? I guess whatever it was that made it so urgent to leave the planet isn't as important as getting revenge on Buck. That's something I cannot stand about "Bad-Guys". They insist on getting revenge on their victims because their victims fought back. Flagg is mad because Buck wouldn't let himself get beaten up by four men who may have killed him, because they wanted to steal his shuttle. So, instead of being Flagg's victim, Buck fought back (much more humanly then Flagg would have been), and now Flagg seeks vengeance against Buck for...what exactly? 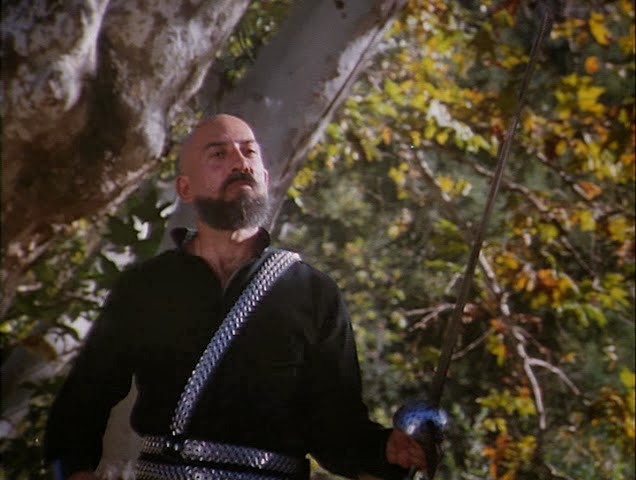 Dr. Goodfellow explains to Admiral Asimov that the curvature of the planet coupled with the close proximity of the horizon to the surface due to its small diameter could be blocking Buck's radio signal, keeping him from contacting the Searcher. Something that wasn't an issue when Buck contacted the Searcher requesting Wilma's aid a day ago. You are a freakin' idiot Goodfellow! What are you doing on the bridge anyways? Why is Asimov even entertaining the idea that Goodfellow might be right? Wilma again shows that she is thinking more logically and requests to go find Buck. Asimov agrees and requests that she report in every 15 minutes to maintain radio contact. The Lamajuna lights a candle, then his spidy-sense starts to tingle. Oh my gosh, nice fake beard Lamajuna! Buck and Hawk make it Lamajuna's hiding place exactly at the same time that Flagg decides to spring his ambush. Flagg indicates that his men are going to truss Buck up like a guinea hen and roast him over a slow fire. There they go again, making a reference to a animal that is long extinct, not to mention forgotten by this day an age. Never mind they are on a completely different planet, far from Earth but also an alien race. The writers are not being very consistent with their story-line. Flagg just created himself his own drinking game. Apparently, he will take a drink every time Buck hollers. The goons all pull out pirate swards. I bed Hawk and Buck are wishing they didn't leave their blasters laying on the ground near their ships now. Luckily Lamajuna was there and he uses his magic to freeze the gang long enough for Buck and Hawk to escape. Once the gang is released, they are too scared and take off running. "There are alternatives to fighting" Thanks Obi-Wan Ken...I mean, Lamajuna! Nice Vulcon hand gesture. 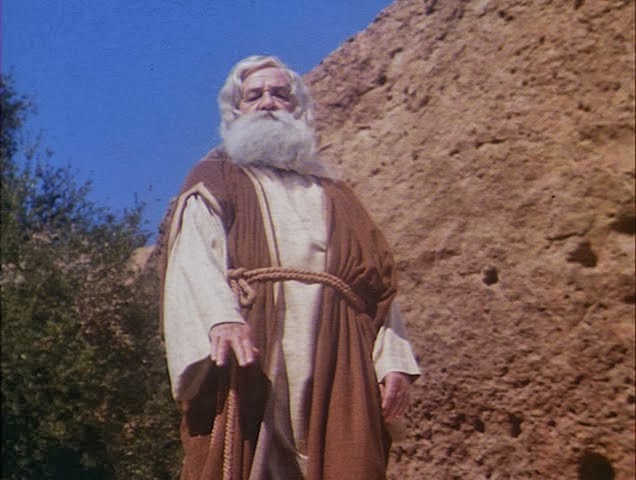 Hawk brings Koori into Lamajuna's cave and sets her down. Lamajuna removes her pain with magic, but cannot do anything for her failing health. I guess all was in vain after all. But at least they tried.
"Am I dying?" "There is no such thing as death, only change" "But I am dying, right?" "...yes" "Can't you save me?" "Save you from something that doesn't exist? That would be magic indeed" Oh my gosh, how frustrating of a conversation! He talks about holding her spirit in her body to create the illusion of life, but not real life. I guess she is already dead, but Lamajuna is animating her body with her spirit. Sounds like she is a zombie to me. She dies. So sad. Hawk requests that Buck leave now, and he wont kill him, if he stays, then who knows. Oh man, why did Hawk have to be waiting at the top of the rocks? They fight, Lamajuna interferes, Wilma locates them and takes Hawk and Buck to the Searcher. 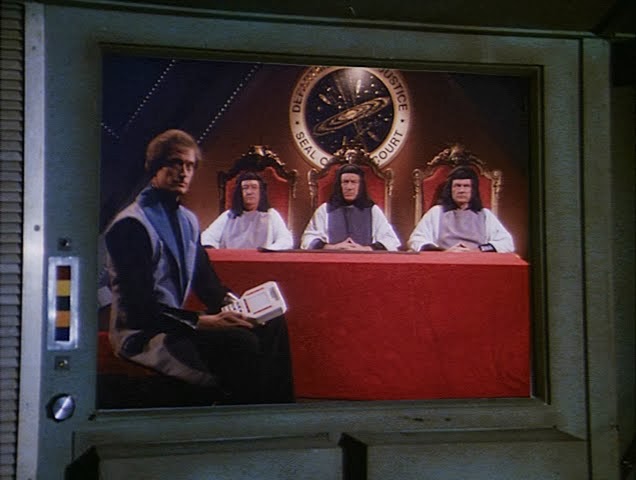 They use the bridge of the Searcher as a make-shift court room to put Hawk on trial. The galactic court is present via video-conference. I guess they didn't want to wait to bring Hawk back to Earth for a public trial, or they were just too far away. Hawk has been on the Searcher for a few weeks now. That is either a reflection on how long these proceedings have taken, or how long its taken to get started. Buck pleads for Hawks life. He gives a nice speech that I could only assume that his lawyer should have said himself. Nice defense, Jerk! Well Buck's speech worked. The court was originally unanimous in sentencing Hawk to death for his attack and destruction of the Satellite Freighter from Throm, and other human outposts in the Argus system. But after Buck's defense, the court calls for a short recess and will reconvene in one hour. During this break, Dr. Goodfellow brings Hawk some photographs of the petrogyphs and statues from Easter Island. He had them copied from microtransparencies (aka negatives) in the archives. They were taken on the cliffs of Motu-Nui. Buck, Asimov, and Wilma come into Hawks room and announce that the courts have withdrawn from the proceedings and have left Hawks fate and judgement in the hands of the men and women on board the Searcher. Buck makes the compromise that if Hawk join them on the Searcher, they will help Hawk search for any survivors of his own people. With One googolplex of uncharted systems they have a lot of searching to do. The idea that there could be more bird-people out there, Hawk agrees to join the Searcher as they explore the galaxy in search of their "lost" people. 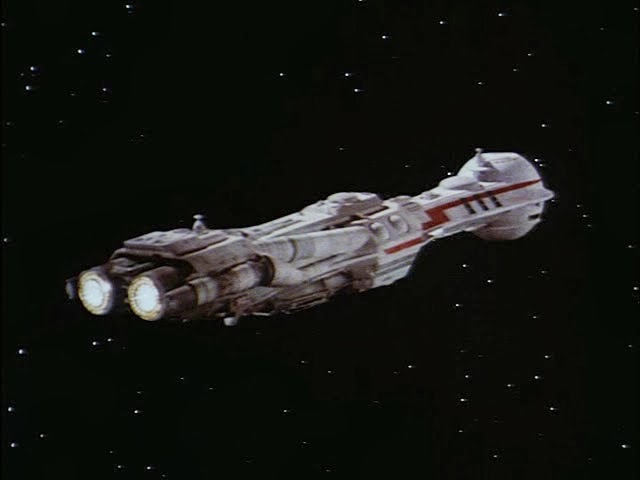