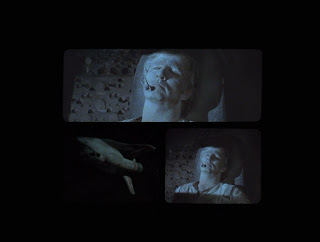 Ranger 3, being Americas last deep space probe, was launched from the John F. Kennedy Space Center as Flight 711 on the nose of a massive rocket scheduled to return in five months. The shuttle being named Ranger 3 is probably the shows first error in relation to the real life NASA. Ranger 3 was a space probe that was launched in 1962 and NASA does not reuse their Names. In other-words, if in 1987 NASA sent off Bucks shuttle, it wouldn't have been officially named Ranger 3, as that name had already been taken, but Ranger 10, or higher (never mind that the Ranger program ended in 1965).

I have to admit that the DVD version of the opening sequence is much better than the TV shows edited version (available on Netflix). Not sure what the point is of having several beautiful women rolling around on giant lit sign, and making out with Buck though. Perhaps they wanted a James Bond type opening sequence? Letting it's audience know right away that this movie had sex appeal. However the worst part of the opening credits is the theme song. While the words themselves may be OK, the singer and pace of the sing is just so cheesy.

In the first episode we are introduced to Princess Ardala, and the Draconian's. I assume the writers were picking a name that sounded Alien, but is inspired from Athenian history, even naming the King of the Draconian's "Draco", after the first legislator of the Athenians. Their stated purpose in coming to Earth was to ensure trade between Earth and the Draconian's. The Planet Earth is being starved out by Pirates who are interfering with their trade and shipping routes. The Draconian's promised to keep their shipping lines open (i.e. protect them from the pirates), in exchange for landing permission on Earth. We learn however that the Draconian's are impersonating Pirates to get inside Earth's Defense Shield. I assume that Earth has never seen a Draconian Marauder fighter as they should have been easily identified as the same ships that the "Pirates" where using. 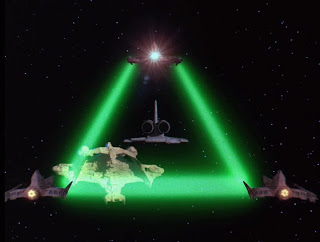 Three Draconian Marauder ships are sent out to intercept Ranger 3. They are a shot-first-and-ask-questions-later kind of people it seems. After determining the ship was adrift, the Marauders tow the shuttle in triangle formation with a joining energy beam. Oh, looks like Buck was awaken by the Draconian's as their technology was sufficient to do so. He was frozen by a combination of gasses in almost a perfect combination: Oxygen, Cryogen, (isn't Cryogen a liquid?) Ozone, Methalon, and was awoken 504 years later, supposedly in the year 2491, if Buck was Actor Gil Gerard's actual age, Buck would be around 540 years old.

In sending Buck back to Earth, Buck mentions that the guys back in Houston would be surprised to hear about his little "dream" aboard the Flagship. Now, I could be wrong, but Ranger 3 took off from John F. Kennedy Space Center, Florida, according to the credits, but is coming back to Huston Space Center in Texas, and when he lands, he is almost at the precise landing site programmed into his ship, Chicago, Illinois...seems like a major geography plot hole in the writing to me.

So, the Draconian's believe Buck's a spy so they hide a Micro Transmitter in his navigation equipment that will send back a guide map of Earth's secret access corridors that Draco could use to pour through their defense shield. Not really sure how a map will be able to deactivate Earths defense shield, but I guess that is something else the transmitter would do, hack the defense shield code. Or perhaps there were openings in the shield that could not closed that could be used to sneak in. Reminds me of a scene out of a Spaceballs. I'm also not sure what the point of this really is, because wouldn't the Draconian's be permitted through the defense shield themselves and could obtain any information they needed then due to the Peace Negotiations? Furthermore, Kane doesn't seem to know much about Earth, despite being from there. He thinks that Earth's defense would allow Buck's shuttle to be destroyed if it was a civilian ship, but would accept his ship through the shield only if he was a military spy? Kane seems like an idiot to me. 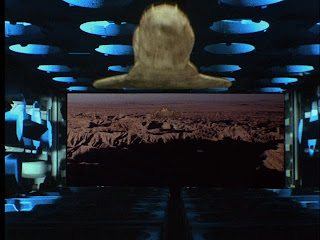 During Buck's arrival, Air Control 1 is trying to reach vessel Able, Baker 4, giving it permission to approach Inner City on Corridor 3-4 Dover. Tracking Control Long is asking about the current position and fuel supply of Vessel Tartalia. The Captain of Tartalia refers Tracking Control Long as Air Control Long? Delta Sector Station, who monitors low frequency direct communication band, picks up Buck's singing Frank Sinatra's Chicago. But Supervisor 14 suspects that it could be Pirate or Marauder echo's from the attack on their freighters the previous night. Signals that would be bouncing around for a week or so. Operation Control directs Delta Sectors incoming signal to Supervisor 14 to confirm that the signal isn't an echo. Returning to Buck, he is singing another Song, Bill Bailey, Wont you Come home.

Intercept Squadron, consisting of Colonel Deering and a secondary pilot go out to investigate Ranger 3. In the control room where Supervisor 14 is monitoring Buck's approach we see several inconsistencies. The first is the position of Buck's light blip. The first time we saw this blip it was much faster and closer to the shield. The second time we see it, it has moved back further away from the shield. We also see four light blips that I assume are supposed to be four Starfigher Intercept ships, when there should only be two. The last time we see Buck's blip, it is further back yet again, and this time it has change its trajectory. The miniature fly over is used three times in this short scene. We see it first as the ships approach Ranger 3, again through Bucks cockpit window flying over the ship, and they appear to fly by a second time.

Buck makes another remark about telling his crazy story to the guys at the "Cape". So, he went from the guys at Huston Texas, to the Guys at Cape Canaveral, Florida (or is this Cape Cod in Massachusetts?). Buck seems to have friends from all over, I guess. Buck starts to suspect that the Starfighters are Russian, so he says "Do Svidanya" which basically means "until we meet again" or more simply, "goodbye". Now, if they were in fact Russian, wouldn't Buck saying goodbye be A) confusing to a Russian anyways, as he wasn't leaving, or B) an act of hostility, threatening to deviate from their present course, which Deering informed Buck would result in his being burned into vapors? So, how was that trying to be friendly? Approaching Earth, we see the two Intercept Starfighters coming up behind Ranger 3, but didn't Buck say earlier that he would be following the Intercept Starfighters, so shouldn't then he be behind them?

Air Control 1 contacts Access for Corridor 1-0 Able to be cleared of barriers for Buck's Shuttle to land. Where he it instantly take in for interrogation which consists of electrical testing that is perfectly harmless. 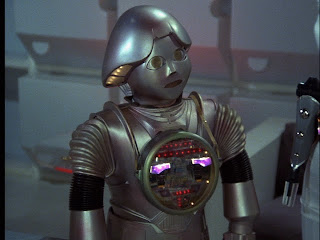 After Twiki, Dr. Theopolis (aka Theo) and Dr. Huer have all been introduced, Buck is left alone with Theo and wants to know who he, himself, is? Did something happen to Buck's memory or confidence in himself to no longer trust his own identity? Not really sure why Buck would be waiting for 24 hours so someone could tell him who he was. Unless he was just trying to be cheeky? 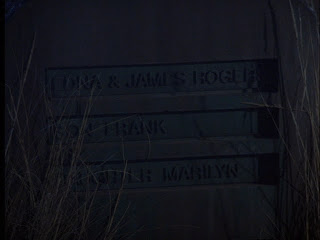 The DVD version seems to have deleted this whole conversation between Buck and Theo, that the Netflix version included. The Mutants are known for putting ambuquads to work doing unmentionable things, and selling gold circuits and parts for big money on the black market. The street that Buck was looking for was "State St." What the significance of the street is to Buck is not made clear. Perhaps it's the street his family lived on, as that seems to be what he is looking for, traces of his family. Bucks family is buried in a near by cemetery with one headstone marker. Edna and James Roger where Buck's parents, Frank and Marilyn where his brother and sister. Watching the Netflix version of the show this whole scene in Anarchia is so dark that I cannot make out anything. The DVD not only has extra scenes in it, but so much better in picture quality.Oh man, look at Buck fight. Is he supposed to know martial arts? Well, the film makers sure did make me think that Buck is supposed to know how to fight, and can take on several attackers at once with no weapons but his hands and slow kicks that barely make it up past his waist. Key-ya! 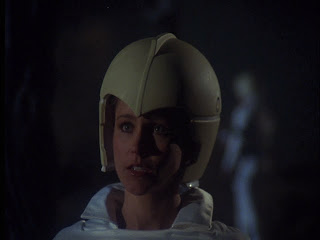 To Buck's rescue is Colonel Deering and four armed men in the Land Rover. A vehicle that is only seen in this scene, and was lucky enough to get a toy made of it. Colonel Deerings helmet is similar to the one she wears while piloting her star fighter, but this one appears like a more snug fit. There are no markings and the color is a off white, almost tan in color. Perhaps she is wearing a helmet that wasn't finished by the time they shot this scene. Here we come to what appears like another error, Dr. Theopolis's lights are off, even when he responds to Buck's question. Oh snap, lieutenant just shot Buck. I presume they just stunned him though. 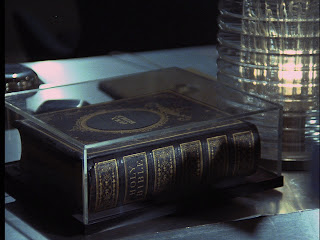 Back in Dr. Huer's office, there is a Holy Bible encased on his desk. Is this some subtle reference that the show is trying to imply the religion of the people at this time?

Kane informs Princess Ardala that the Micro Transmitter had provided the guide map that they wanted, but had been discovered and no longer transmitting. But Kane is unconcerned, because his new plan is that once the Draconian's are welcomed through the Defense Shield for the negotiations, they will destroy the shield from within Earths defenses. This isn't helping Kane's defense of not being an idiot. He has the map that he wanted/needed from the Micro Transmitter, but disregards it's information altogether because now he will destroy the shield when they are welcomed to Earth, which was going to happen anyways. Did he just now think of this? 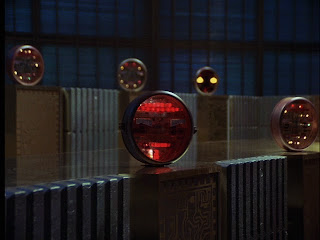 The Computer Counsel Charges Buck with Treason and Espionage after finding the Micro Transmitter on his ship. They suspect that he was sending the information to Pirates. Counsel members consist of Apol, Dr. Theopolis, who is defending Buck. A deleted scene that is not on the DVD but is in the Netflix version is where Colonel Deering asks the Computer Counsel for permission to postpone Buck's termination to prove his innocence. Something that I think should have been done before convicting someone, don't you agree?

Best error in this episode is the boom mike that drops down too far as Deering is telling Buck about going back onto the Draconian Flagship to prove that he was indeed aboard it, and if the Draconian's are armed. Something that was cut from the DVD version. Too funny.

So, the reason that Deering gives Kane for inviting themselves onto the Draconia is to provide protection from Pirates. But isn't that what the Dranconian's are there to do for Earth? If Deering could fight off the Pirates, why then are the Draconian's there in the first place? Granted it's against the law for the Draconia to come armed, but what good is an unarmed ship going to be against the pirates? I am confused again.


Character facts learned in this Episode

Posted by Patrick Kenney at 3:50 PM