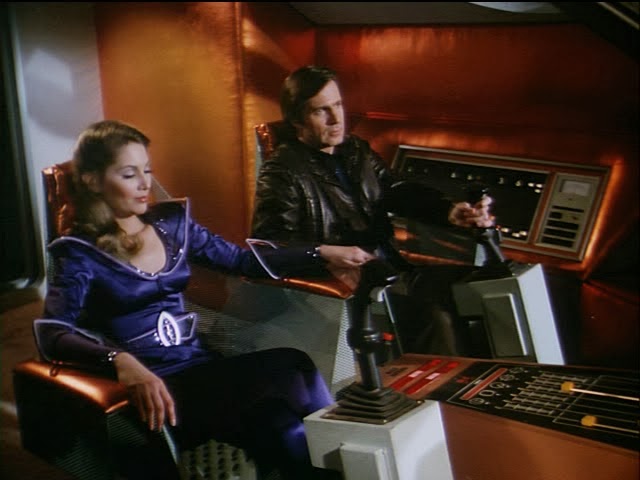 Elana and Buck are flying home from their vacation in the country. Elana sees a giant sphere on the ground (I thought they were in space, how did they see this sphere?) and decide to take a closer look. Buck contacts New Chicago Control to get a hold of the Directorate. They are 20 minutes southwest of New Chicago where they see a large gold ball in the middle of the desert. I am pretty sure that it is a silver or gray ball, not gold. Dr. Huer suspects that it may be some kind of Draconian trick as the Directorate has been having a lot of trouble with them recently. An intercity shuttle also reported the sphere but it is undetectable on all sensors. Buck, Wilma, Huer, Twiki and a couple of technicians drive out to the sphere to investigate. Wilma says that a pilot reported it being saucer shaped. Buck wants to call it a U.F.O. 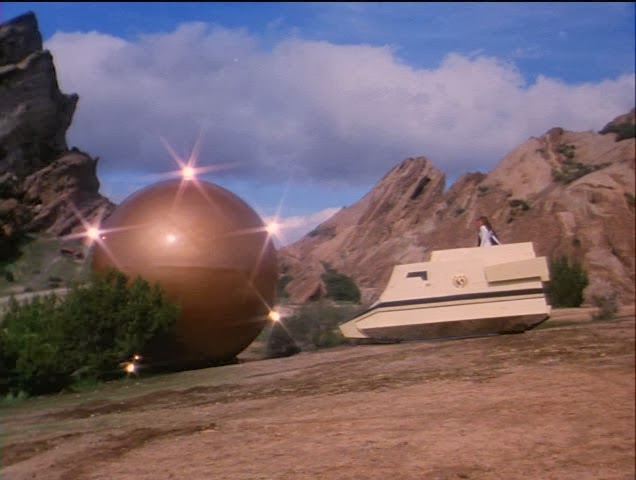 Not only is it not saucer shaped, but anything flying from space is no longer viewed as a unidentified flying object, but a space craft. Wilma reassures the audience that it might have once been saucer shaped but it is no longer. But we know better. It was always a sphere. A smaller gold ball comes out of the larger, now gold, sphere for Buck Rogers. Once they have the ball, they head back to the labs. Using a vibrosonic table (an instrument that separates molecules of matter at their natural interface), or like some sonic diamond cutter, they hope to open the ball. At precisely the right tone the orb should separate. And it does. Using a micro-magnifier Dr. Huer examines the microchip that was hidden inside the gold ball. It contains Cryptographs in English (the universal language), combined with binary patterning (or codes). Dr. Huer calls them "patternings" which isn't a real word doc. Only Code-5 Technicians are allowed in the lab to analyse the chip. Apparently it contains a secrete of the utmost importance to the Terrans. No, not really, it's just a GPS chip. 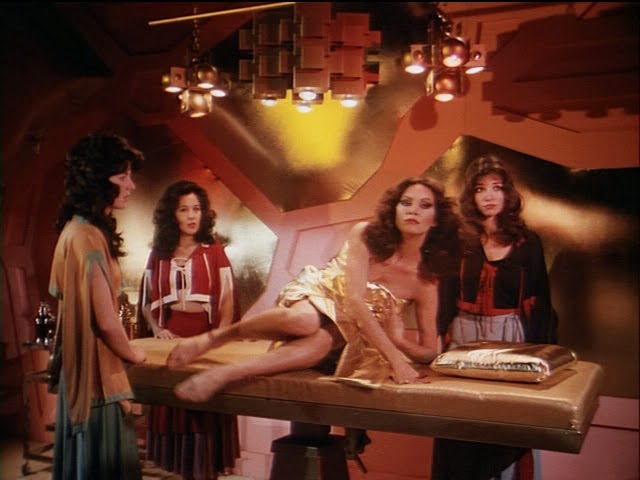 Kane brings in his spy, Gontril, to inform the princes about the gold sphere. So, Dr. Huer was wrong in assuming that the sphere was from the Draconian's. Princess Ardala is getting her typical massage when she heard the news. Ardala orders Kane to violate their truce with the Terrans and steal the orb. Dr. Theopolis has discovered the code on the chip. It is a road map through a Vortex to travel to another universe. Proving the Vortex Theory to be scientific fact instead of just theory. Also in the chip was the word "PENDAR", the name of the planet. 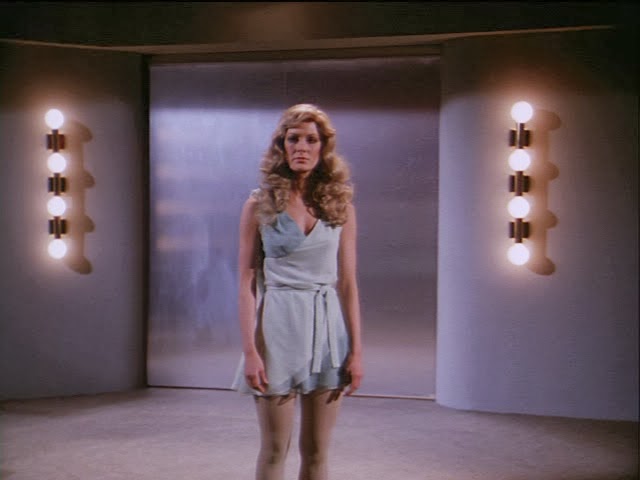 On Pendar, in the counsel chamber (computer vault?), Tora tells the Keeper that the harbinger completed its mission and returned. Now we have a name for the gold sphere, the Harbinger. Tora informs the Keeper that they had chosen Terra for its military capabilities, and the Draconian's for it's malevolence. So, what did they send to the Draconian's? Nothing, that's right. They planned on the Draconian's to learn about the sphere and to steal the small orb and discover the GPS chip all on their own. That's some pretty good foresight. Next the Keeper wants a report on the Zaad's battle cruiser. It now lies 3,600 fetics down side Pendar. The cruiser continues to launch attacks against their defense shield. They recently abducted Kodus, one of Pendar's scientists. Each day, at a certain hour, Kodus is moved from the second to the fifth level to Zarina's quarters where he is tortured. The Keeper is concerned about Kodus's auric energy reading being so low that he wont be able to resist the pain for much longer and provide the Zaads with the codes to the defense shield. 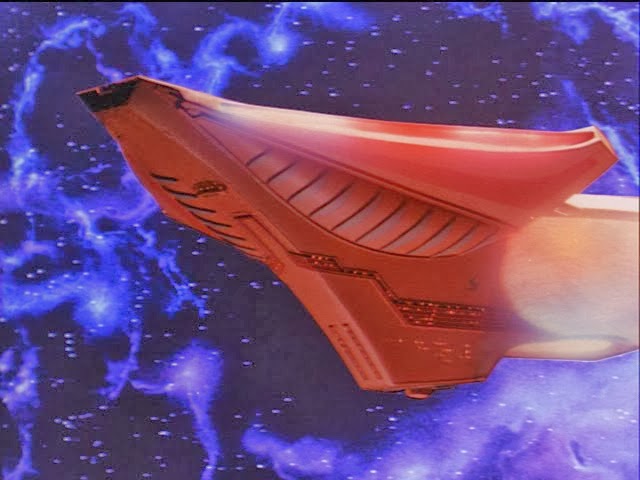 On board the Zaad Battle Cruiser, Zarina, and Spirot have Kodus restrained. Spirot tortures him before he passes out. Buck goes into the labortory before going to bed to look at the word PENDAR again. Gontril and another spy take out the to guards to the lab in order to steal the orb. Buck is able to take out Gontril's assistant, but gets knocked out. Gontril makes off with the orb. The Draconian spy is in custody when Wilma shows up on the scene. Dr. Huer isn't too concerned about the theft as Ardala will still have to decrypt the chip. Huer is having a guidance chip installed on a Starfighter that contains the info from the stolen orb. The Starfighter will be piloted by a B2-500 drone. However, Buck volunteers to take the drones place, Huer agrees to the plan. This I am sure is a good way for the art department not to have to design and create a B2-500 drone. Mention it, but don't use it. With the orb in hand, Ardala thinks it looks like a Regulian plover's egg. Something her chef made her once and was executed for it, as it upset her stomach. Dr. Huer calls Ardala on the vid-phone and lodges a formal protest about the Draconia's constant truce provision violations. For example, the attacks on their interplanetary shipping. Am I the only one who feels Dr. Huer's choice of words seems more confusing then anything? Couldn't he have said something more like "I am going to file a formal complaint" or "...submit a formal grievance"? I know that the sentence is right by definition, but it just sounds wrong. Dr. Heur and Wilma make plans to board the Draconia along with Major Daniels and Lt. Wainwright once Buck is on his way through the vortex. 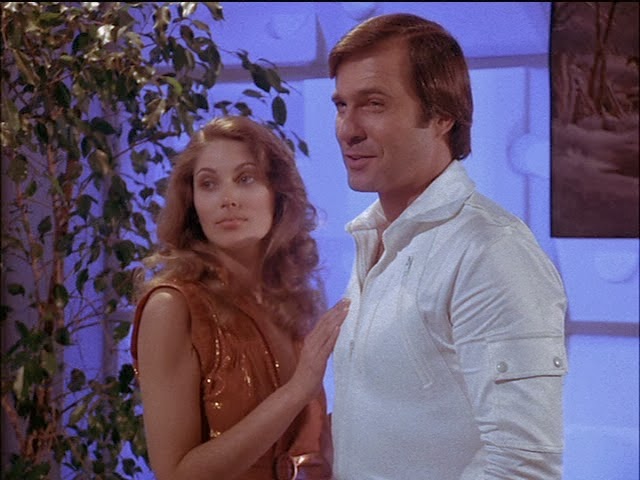 Dr. Huer walks into Buck's room to catch him making out with Elana[?]. I cannot tell if this is the same chic from the beginning of the episode, or if he has another woman already. Well, she gives him a goodbye kiss and Dr. Huer explains that he has tinkered with Twiki's synaptic points so that he would return to Earth automatically if something happened to Buck. Uh, if Buck is killed or destroyed (like the Starfighter explodes), how could Twiki return to Earth, especially if he was with Buck at the time? Why wouldn't Twiki return to Earth anyways if something went wrong? Dr. Huer feels that this is the most dangerous mission he has ever assigned to anyone, so naturally, he is concerned for Buck's safety. I hardly believe that is true. If you watched the show, Buck has been on much more dangerous missions, as well as some villains who resurfaced and wanting revenge on Dr. Huer for the dangerous mission they where on. 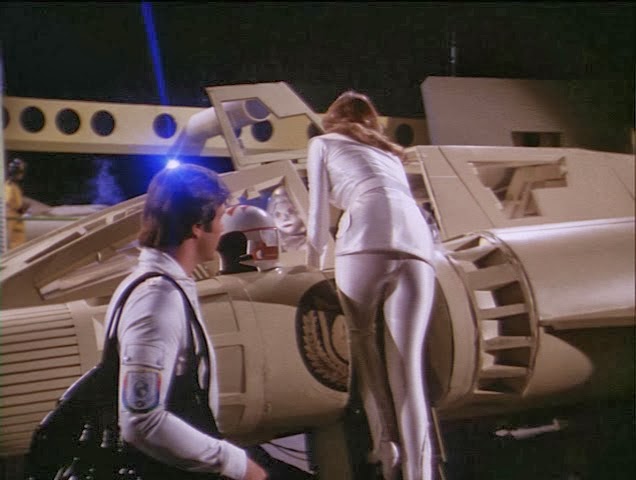 Missions where someone could be killed is a risk everyone who's flown a Starfighter has undertaken. Truth is, Huer is just concerned that Buck wont come back because he has become like family to him. Wilma on the other hand breaks down in tears fearing Buck wont return. She tells him that he makes her feel like a real woman. This scene shows the strong feelings the two have for each other. A real love relationship between Buck and Wilma. I would expect them to commit and settle down together someday. Unfortunately, Buck seems to enjoys his casual relationships too much to settle down with one woman. Wilma, patiently just waits for Buck to get it out of his system. When he's ready to commit, she will be there. 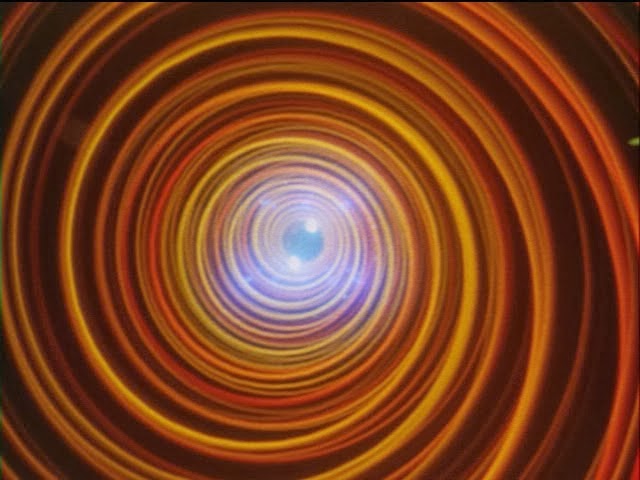 Buck heads out to the 18th quadrant at a fraction under light speed. Buck gives the Directorate love and kisses for his last check-in before he enters the vortex. Buck keeps talking, describing his experience as he travels through the Vortex. The special effects is very reminiscent of 2001:A Space Odyssey. All manual controls are down. Buck is relying solely on the pre-programmed chip in the Starfighter's navigation. He is on autopilot. Princess Ardala is also listening in on Buck's radio transmission as he enters the Vortex. Ardala tells Kane that she wants one of those computer discs to send the Draconia through the Vortex. Kane informs her that their technicians are already working on it. "Oh" is her response. Love it. Way to stick it to her Kane! 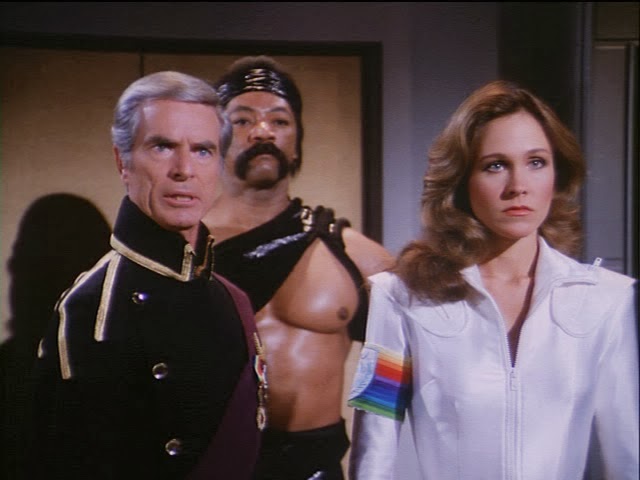 Chandar and her mother, Tora, are tracking Buck's entrance through the Vortex with their perimeter sensors. Tora assures her daughter that the Observers say that Buck is very special and will be able to help them with their war witch issue. So, Buck just thinks he was invited to Pendar just say "hi". Not fight a war. What would Pendar have done if the Directorate sent the B2-500 drone like originally planned? Screwed! that's where. Buck makes it through the planets defense shield and tractor beamed down to the planet. Dr. Heur and Wilma enter Ardala's command center and demand the orb be returned to them. "You're not in any position to demand anything" but she plans to give it back anyways since she is done with it. To pretend to keep the treaty she could have simply said, Sorry, here you go, since she planned on giving it back anyways. But because of Ardala's non-cooperative attitude, Huer dissolves the treaty between the Draconian's and Terra. They are at war with each other once again. Well, nothing like declaring war against someone while on their ship. Can you say "instant prisoner of war"? Ardala takes Huer and Wilma with them through the Vortex. 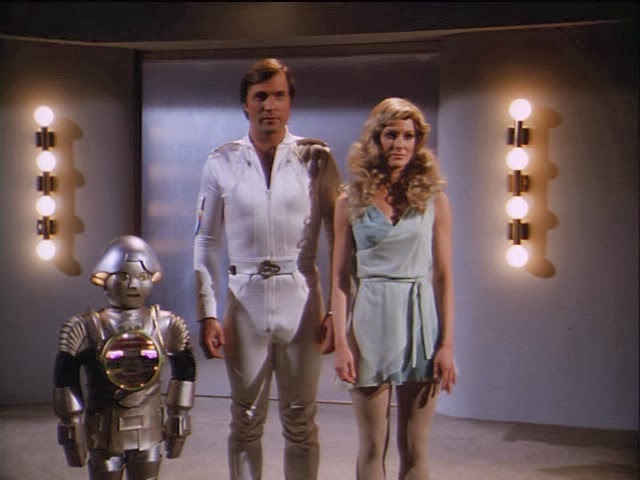 Chandar materializes to greet Buck and Twiki. She brings him in to the Counsel and the Keeper. The Keeper asks for Buck's help to fight their war against the Zaad. The Keeper informs Buck that they have the ultimate weapon that can atomize the Planet Zaad, however Pendar's gravitational balance would be destroyed in the process, so they cannot use it. Why did he bother mentioning it like it was an option that would be considered then? Their second weapon is not really a weapon, but defensive. An energy field that surrounds the planet. If Buck refuses to help, they will ask the Draconian's for help as a Plan "B". What is Plan "C" if the Draconian's don't help (which is likely)? Just then, their computer sounds the alarm. Zaad fighters are attacking the energy perimeter at Sectors S-2, N-1, & N-2. The computer's automated response activates the supplemental beta radiation. Zaad Shark fighters fire at Pendar's force shield with zero success. The computer stabilizes the Electron configuration at 22.5 megakilons. Delta Alert is terminated as the Sharks retreat. Oops, spoke too soon. Two Sharks made it through the shield. Ground troops are on their way to the capitol. 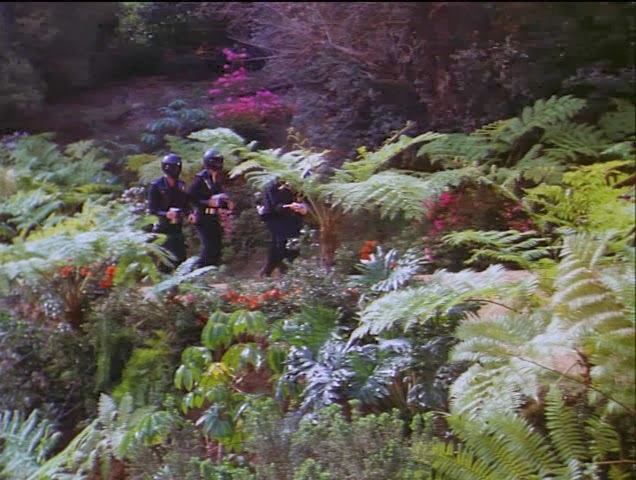