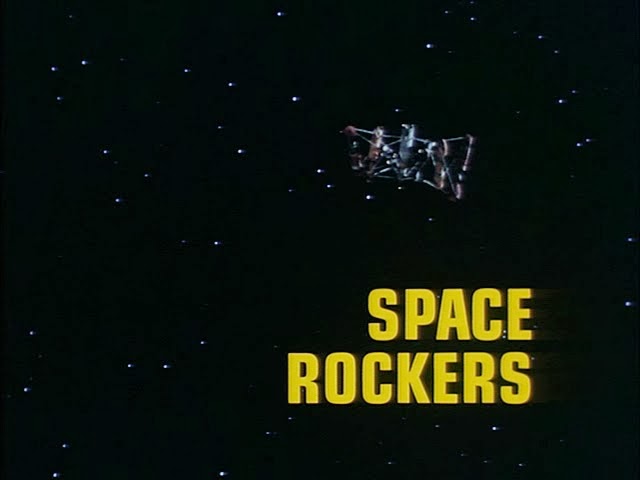 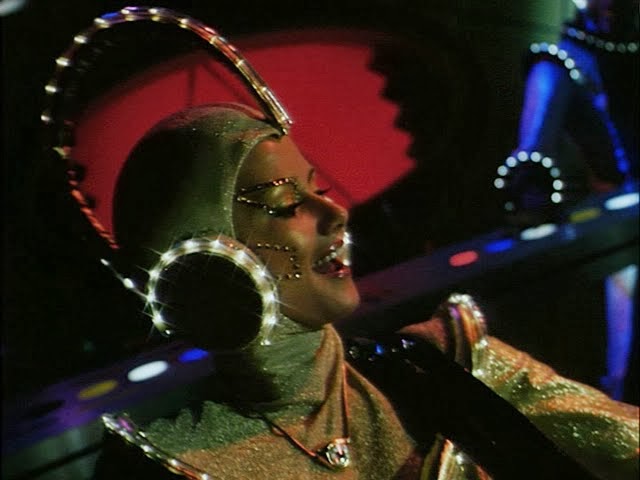 Oh my gosh! I hate this episode already. The music is awful, and the costumes the Space Rockers are wearing are ridiculous. Lars Mangros and his bodyguard, Yarat, enter the control room and confront Tarkas, who was going to send a report to New Chicago. Yarat shoots Tarkas and takes his body to a garbage duct and is evacuated into space. Dr. Huer informs Buck that he is expecting a transmission from Tarkas in the Andromeda concert video. Instead, Yarat and Lars turn on their machine and brainwash their listeners at the Youth Center (under 30 years of age) to begin a rampage of violence, and destruction. Two such kids, Elaine and Mark, break into the New Chicago Spaceport, assault a technician and steal the 4-seater Thunderfigher 1314, Buck's ship (but the miniature is the 2-seater Starfigher). Buck takes off after them and regains control of his ship when Elaine comes to her senses and flips the remote control switch. Boy they are in trouble now! Buck doesn't press charges, but sends them home to their parents instead. Which is a worse fate then being sent to the rehab center. 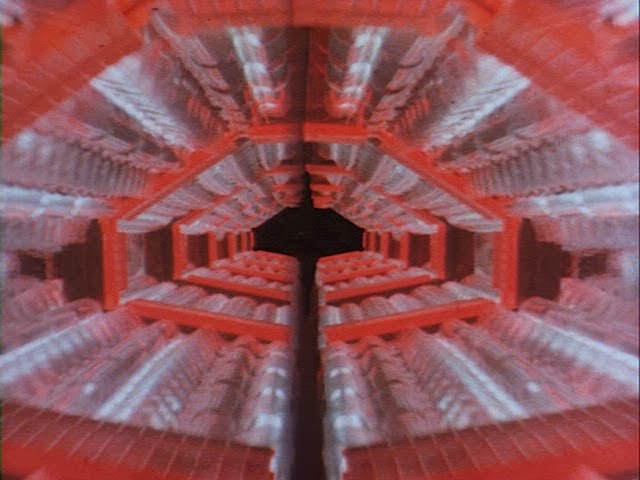 A Starfigher patrol found Tarkas' body floating in space. Buck volunteers to take a closer look at Music World and devises a reason for him to go. In two days Andromeda will give their first galaxy wide concert at 1900 hours (7:00pm). Buck suggests that he goes as himself to introduce the rock 'n roll group by the guy who was around when Rock 'n Roll was born. Huer agreess with this plan and believes their friend at Music World, Wesland, will be able to help them with his plan. If Huer already had a friend/promoter at Music World, why did he send Tarkus? Buck arrives at Music World. 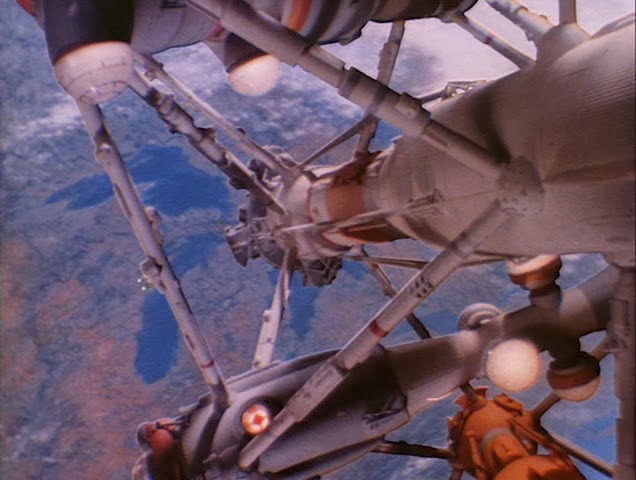 Lars describes his plan to Yarat to take control of the galaxy. With his particle ionizer at full power and played during the Andromeda concert, all people in the Entertainment Centers watching the show will become agitated to riot. With all the youth of the galaxy rioting all at once, all authority will collapse in a few hours. The heads of government will be at their wits end will be forced come to Lars for his help. At which point he will restore order. After that Lars will...uh...hmm, be arrested? Buck, who earlier Yarat assured Lars to be no threat, is now going to be sent home in a hospital shuttle. Buck arrives at Music World...wow, déjà vu. 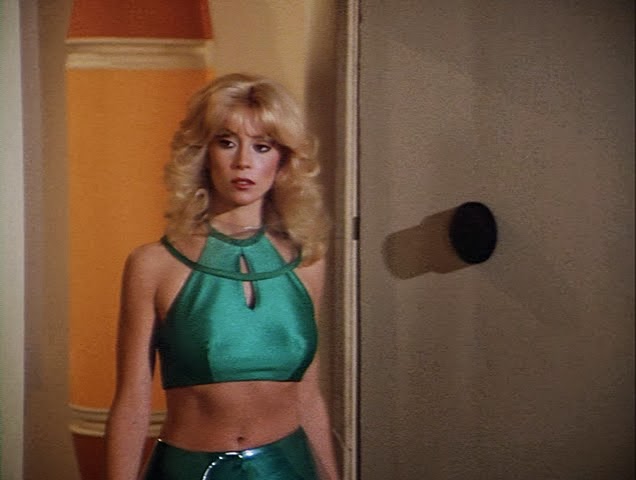 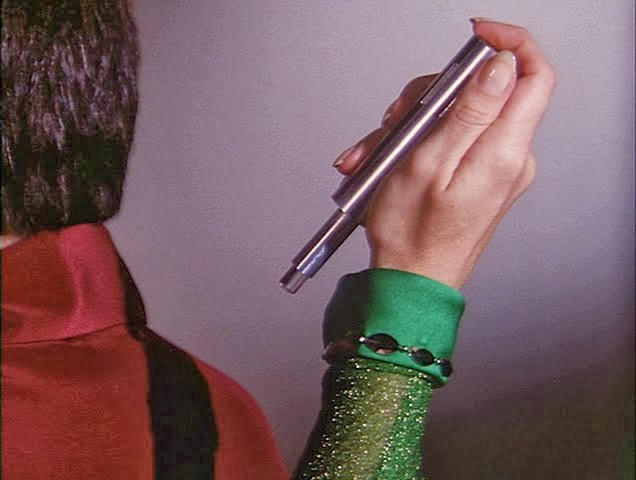 "Will the sonic engineer for Enrto-Beat please call Control Room "K"?" Once Buck gets off his shuttle he is greeted but a gang of armed men. Didn't Lars say that Buck would leave an hour after he arrived, not instantly? Buck kicks first. Well, with that out of the way, Buck heads to his room, changes, and Joanna brings him in to see Lars. From there Buck is introduced to Andromeda and Karana shows him around the station. In his off hours, Buck sneaks into the Control Room and finds a micro chip that contains the word "Veck" (where did he see that?) and a brain wave pattern of an adolescent human. Plus a higher frequency that causes agitation....Whow, Joanna walks into Buck's room to 'Entertain' him, whatever that implies. With her soft sexy voice, she asks if she could speak with Buck alone. Lars turns on his particle ionizer to affect Joanna. Music in his room turns on automatically and Joanna is now in some kind of hypnotic trance. She pulls out a concealed hypo that she had up her sleeve. But Buck is too smart and too fast for her. Music is off and she is no longer in her trance. Buck tells her to leave and he will see her off in 30 minutes. 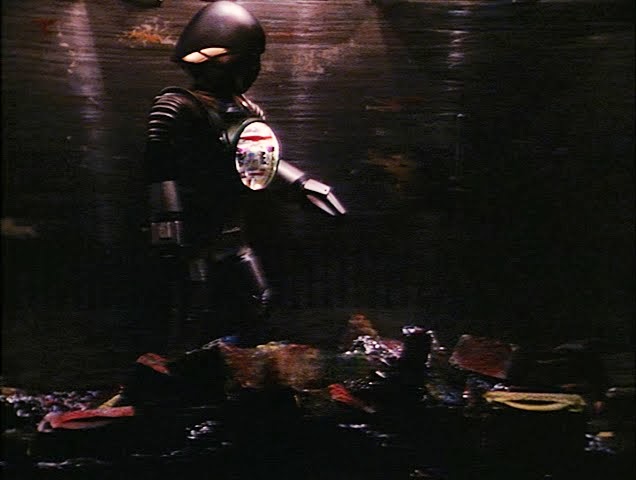 Buck goes to talk to Andromeda about Lars hiding a ionic wave in their music that is causing all the youth to riot. Andromeda's necklace that Lars gave them, acts like a filter and screens out the ionized waves (What is protecting Buck?). Andromeda decide to confront Lars, but he locks them up. Buck is waiting in his room for two hours before he grows suspicious that something must have happened to the band. Buck makes a new plan, that instead of keeping Andromeda from preforming, or for Dr. Huer to jam the transmission, he will destroy the particle ionizer (uh DUH!). Theo informs Buck that the ionizer is in Lars office. The only way to get to his office without being seen is through the waste disposal system. The same system that Tarkas was launched out of into space. I feel some foreshadowing coming on. Twiki enters the waste duck ('case he was the only one small enough to fit) just before Lars and his gang enter Buck's room. 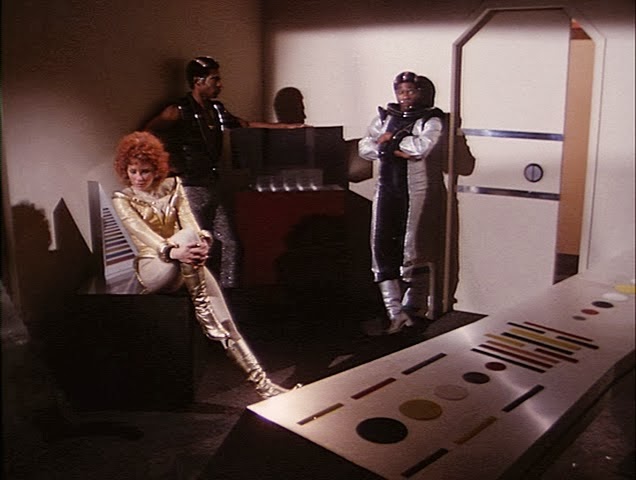 Dr. Huer and Lars Mangros are discussing the concert. Huer informs Lars that the Directorate has placed a jamming satellite in orbit around Music World to prevent the concert from being broadcast. The satellite model is the same as the Time Capsule. Unfortunately, Lars destroys the satellite. Just as Twiki is about to grab the particle ionizer that is just out of reach, the waste disposal system turns on and sucks the garbage and maybe Twiki too, out into space. Buck and Andromeda are locked in a storage room that Buck compares the walls to ten-point steel. Karana says its cronide. Huer puts the Directorate on Full Emergency status. There is a organ in the same room with Buck and Andromeda. Buck thinks they can use the organ to break out of their prison. If they disconnect the C.P.S. governor (er, you mean 'regulator'?), then connect the speaker to it they will be able to increase the cycles per second (or C.P.S.) output to be so loud that it will do something to the cronide. It's all so simple. 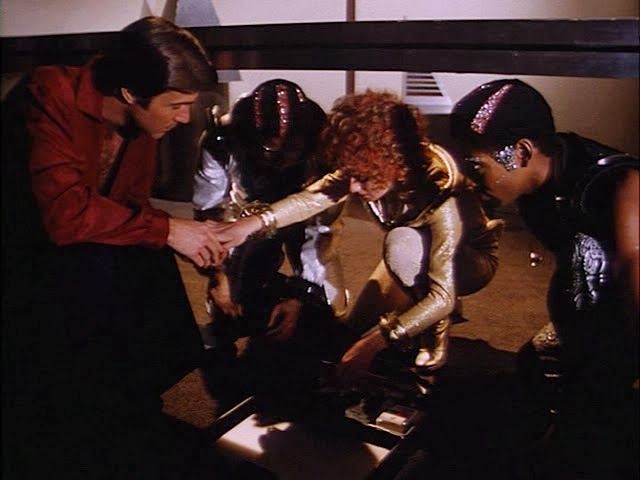 Twiki fails in his mission to obtain the particle ionizer. Lars runs the pre-recorded video of an old concert of Andromeda. If the future is anything like today, it wouldn't take long for a of couple kids to youtube Andromeda, discover that the show on now wasn't like and quickly blog or tweet about it. It would go viral, and all the money that Music World is making from their Pay-per-view concert will have to be refunded. But so far so good. All the galaxies youth are doing the light rope dance. Andromeda are finished with their modifications to the organ and turn it on. Using the sound waves they are able to blow out the lock on the door only and escape. Thank you McGyver! 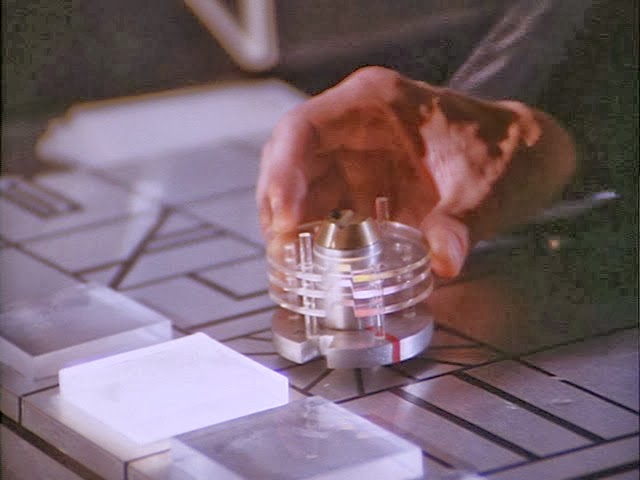 Buck takes out Yarat and smashes the particle ionizer. Just then all the youth come back to reality and are no longer under the trance. Unfortunately for Lars, he does not know this and goes on the broadcast demanding the youth take over their world. The youth just laugh at him. Infact, the whole galaxy laughs at him. The Directorate, show up will full security personal at their Youth Center to regain control, only to find all the youth calm and dancing to Andromeda! Dr. Huer orders his security personal to arrest Lars Mangros on Music World, despite that the fact that Directorate has no jurisdiction there. Long live Rock 'N Roll! 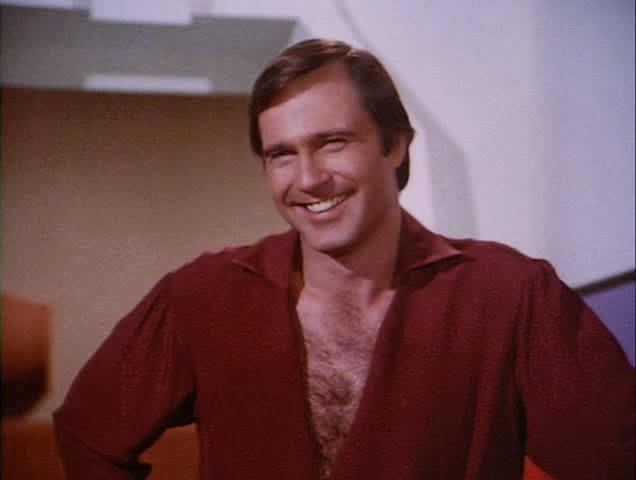