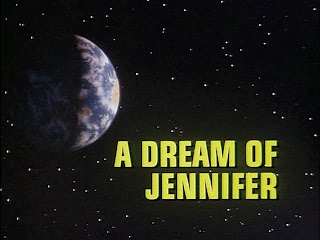 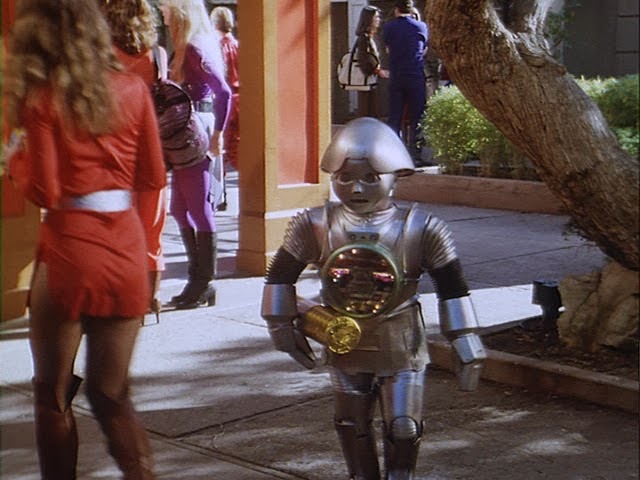 Buck, Twiki, and Dr. Theopolis are shopping at the Old Chicago Shopping Mall (Maintained by the Earth Preservation Society) for parts for Buck to build a Hot Tub. Theo suggest that a sonic shower in zero gravity should accomplish the same result. That's when Buck see's a woman who he recognizes to be Jennifer, is long lost love, and takes off after her...Unable to catch up to her, Buck returns home. Depressed, Buck goes to sleep and drifts into a dream...Toby awakes Buck, calling him 'Rip Van Winkle'. Toby and Buck have to report back at 0400 hours so they try to make the most of 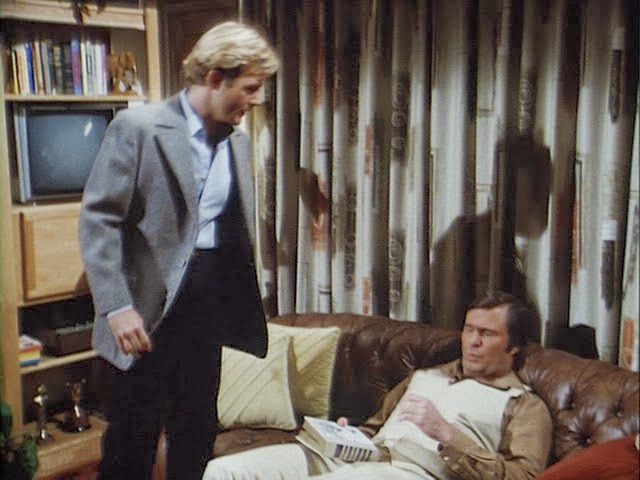 their night. Wait, Buck asks what time it was and Toby says nearly 7, then uses military time when mentioning when they have to report back to the Air-force base? Shouldn't he have said its nearly 1900 hours and not 7? Oh, well. Blame the writers. Buck gets up to get ready to take Jennifer out to Raphael's. Jennifer shows up and hands Buck a going-away-present of a photo of her. Buck promises Jennifer that after this mission, he will retire and never leave her again. Famous last words. Sheesh, they sure do a lot of making out. 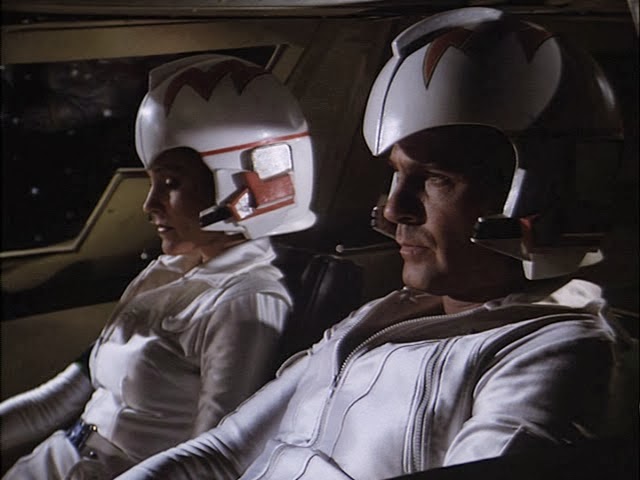 The next morning, Buck and Wilma finish showing the cadets some fancy flying. Wilma notices Buck's altered mood and inquires about it. Buck tells her that he doesn't want to talk about it, then tells her again that he doesn't want to talk about it. Did the director film this shot twice with different outtakes, and edited them both into the scene? Wilma instructs the cadets to return to the Directorate flight hanger as she and Buck will return to New Chicago via central spaceport. 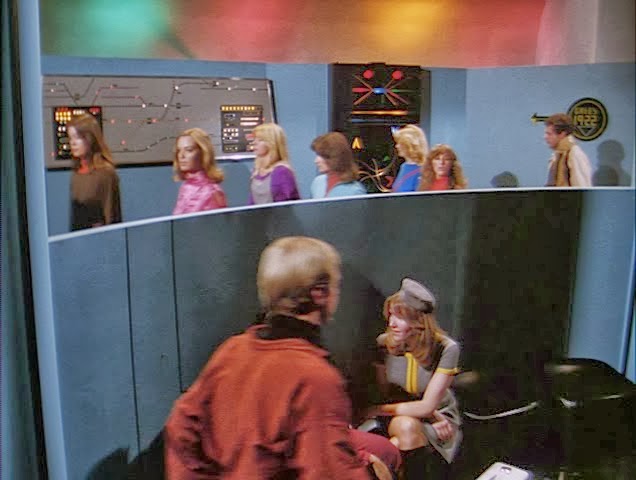 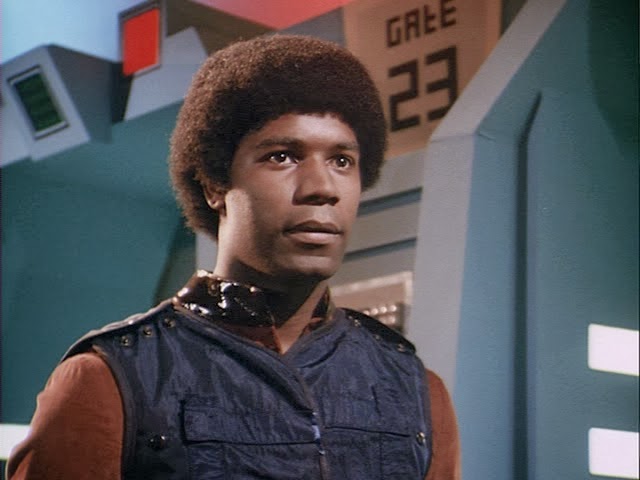 "Flight 723, From Altair 3, now arriving at Gate 14...Orbital Shuttle 409, for City-On-The Sea, now boarding at Gate 23..." Buck and Wilma exit out of the gates. Wilma indicates that she has some business at the Spaceport Control. Buck waits for her in the lounge. "Subspace call for Mr. [Nola Bad]. Please report to the nearest vid-phone immediately" Buck see's Jennifer again and takes off after her. This scene is kind of a hash of editing as Buck runs down the same section of the set again and again to give the impression that he is traveling a great distance. Jennifer boards flight 409. "Last boarding call for Orbital Shuttle 409, for City-On-The Sea, now boarding at Gate 23". Buck arrives at Gate 23 just too late. Jennifer has boarded. "Captain Christopher Pike, please report to the Veterans Affairs Office at once." Buck heads to the Reservation Desk to inquire about Jennifer. He learns that her name is Leila Markeson and went to City-On-The-Sea. "Officer Katar Hol, your ship is being readied in Hanger Bay 9". 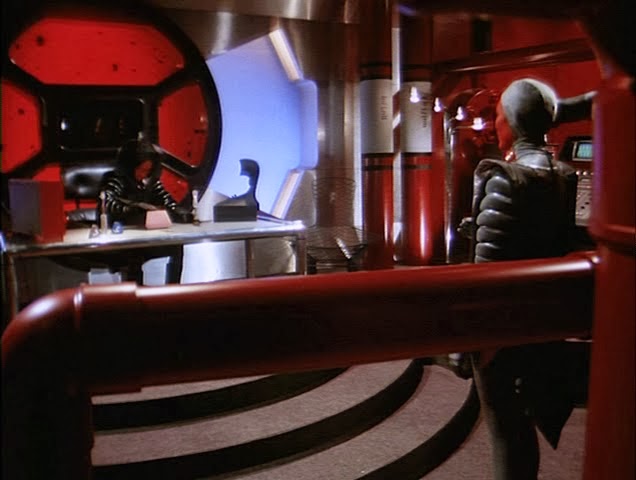 Nola enters Commander Reev's room (which looks awfully familiar...perhaps Roderick Zale's office from Cosmic Whiz Kid?) She reports that she has a progress report from the Vega system. The Vega colonies weapons and supplies will be depleted within five solar days, unless the Earth Defense Directorate succeeds in their mission of mercy. But they feel confident that that wont happen. The Commander hope's that Buck Rogers will help them destroy the freighter of supplies the Federation is sending to Vega. Leila Markeson enters the room and informs the Commander that Buck Rogers is following her as planned and should arrive shortly. 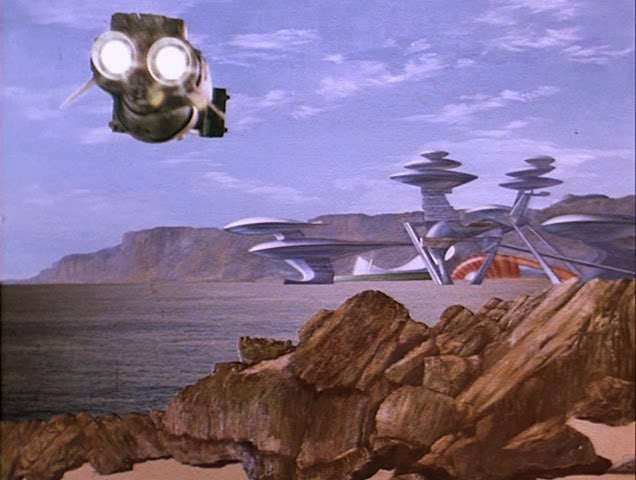 Buck contacts Airspace Control for landing permission at the central spaceport. Why buy a ticket from the spaceport when you can fly there yourself? Airspace Control approves his landing, and requests that he decelerate to Mach 1 (760mph?) for a proper landing. I don't think he was traveling that fast in the first place, and would probably want to decelerate slower than that to land. Leila Markeson asks the red faced Commander Reeve about her credit voucher. I guess Leila doesn't like working with cold hard cash. Reev informs her that her first payment was already been paid and the second half will be paid once he has Buck Rogers.
Commander Reev then calculates how soon Buck will begin looking for the fake Jennifer: half-hour journey from New Chicago, 15 minutes to disembark, 10 minutes to register for lodgings, making it 1500 hours (3:00pm) when he begins his search. Giving him an hour or two to look, it should be around 1600-1700 hours when Buck finds Leila (5:00pm). By this second hour Reev suspects that Buck will be so discouraged and tired that it would be a perfect time to introduce the fake Jennifer. I would hardly think that after one or two hours of searching even I would be tired or discouraged, little-lone Buck Rogers. 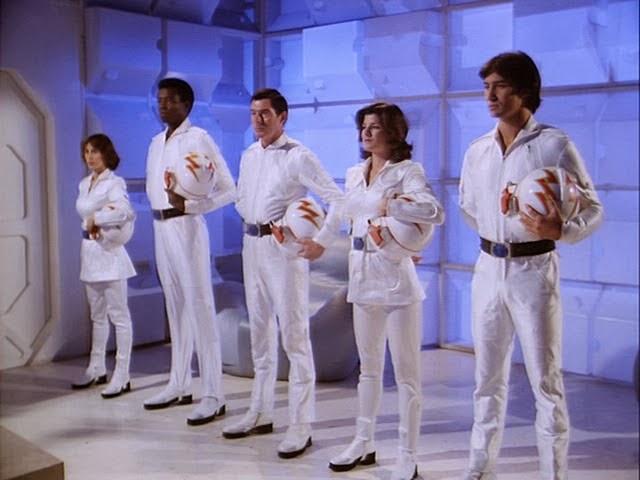 Dr. Huer addresses five Starfighter pilots in his office. The red-faced Koven are a warrior race in the Kadar system. They plan to attack Vega V, but the Directorate legally cannot send Starfighters in to help. However, they can send emergency equipment, supplies, and weapons. The five and Colonel Deering will be on the bridge of a M-Class Starfreighter (an old model Starfreighter that was abandoned being used a long time ago) which the Directorate secured for this mission. The rest of the crew will be maintenance androids. The freighter has gone through some upgrades, like replacing the ion engines with a new tachyon drive. I assume this is same freighter that Commander Reev is hoping to destroy with Roger's help. 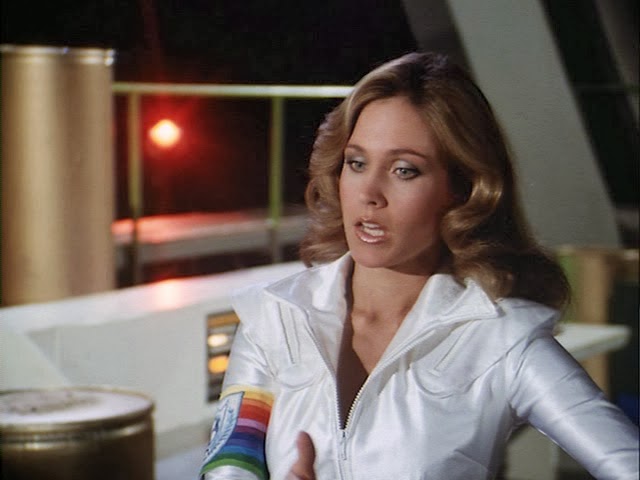 Loading the supplies, Deering orders Alpha Team to take the shield generator to Shuttle 12, stored in hull Section "C". Deering indicates that they only have nine hours. If the time was between 4pm and 5pm (since Buck just met Leila), their deadline would be 2:00am. However, Deering indicated that she will have the shuttle loaded by 1300 hours (1:00pm), then one hour to the freighter, two hours to transfer the supplies from the shuttle to the freighter for their trip to Vega V. Making it 1600 hours (4:00pm) before they head to Vega V. Once the supplies are fully loaded in the freighter, it will take 6.3 hours (0r 10:18pm) after they exit the Stargate to reach Vega V. 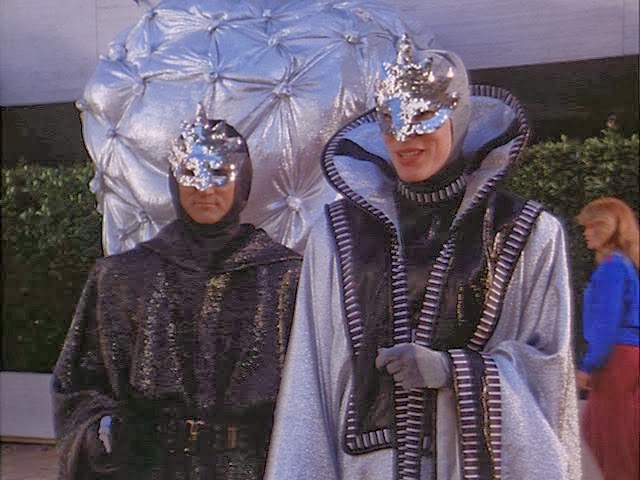 After fighting off two masked individuals Buck and Leila are alone in some storage room. She tells Buck that while he was off world, Commander Reev (or someone working for him anyways) got into Bucks apartment and happened upon Jennifer's photograph (Thank you Directorate Security!). Not knowing anything about her, they decided to recreate Jennifer to use as bait. Leila was all for the surgery to be come Jennifer as she was tired of being poor and Reev offered her enough credit vouchers to sway her ethics. Oops, they are caught! Apparently Leila had a small transponder inserted under her skin when she had her surgery that the Koven used to locate them. 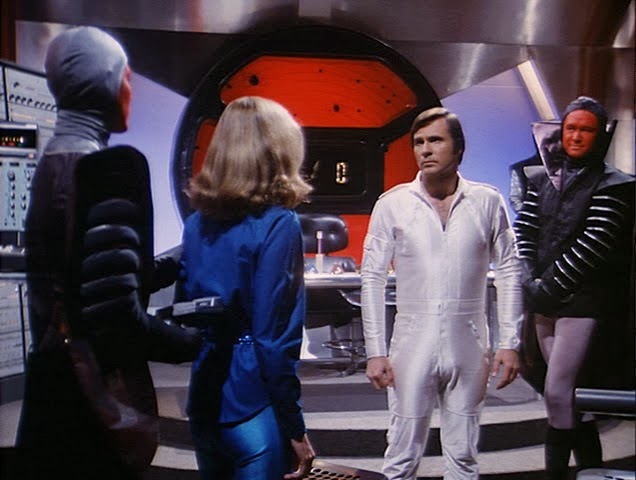 Commander Reev is trying to recruit Buck to help destroy the supply freighter. Reev believes that the conflict with Vega V is a "minor one" and will disappear on its own if left alone. But not if they get the fresh supplies on board the Federation freighter. Reev indicates that the Federation network was infiltrated with by nationalists in the colony. The Federation is now supplying Vega V based on inaccurate information (What information is what exactly?). So, to avoid a war with the Federation and the Koven, they want Buck to destroy the freighter (so they can blame the Directorate?). Somehow this will be a great service to the Federation and Vega V. If Buck does not go through with it, he and Leila will be executed. Leila tries to undermine Commander Reev's threat by telling him that he is bluffing. They originally planed on putting Leila into Cellular Suspension (huh? why where they planning on this?) and would never kill her. Buck says that he will not do it for Reeve or anyone. What about Leila? Would you do it to save her? Well, he was already told that Reev would kill both him and Leila, and he refused, and he refused anyways. Now Reev is threatening to kill Leila only. This apparently was enough for Buck to change his mind.Oh, well, I guess Buck spoke to soon about not doing it for anyone. Commander Reev gives Buck twelve hours to destroy the freighter. Course, the freighter will arrive in 6.3 hours, so he'll have to twiddle his thumbs for awhile. 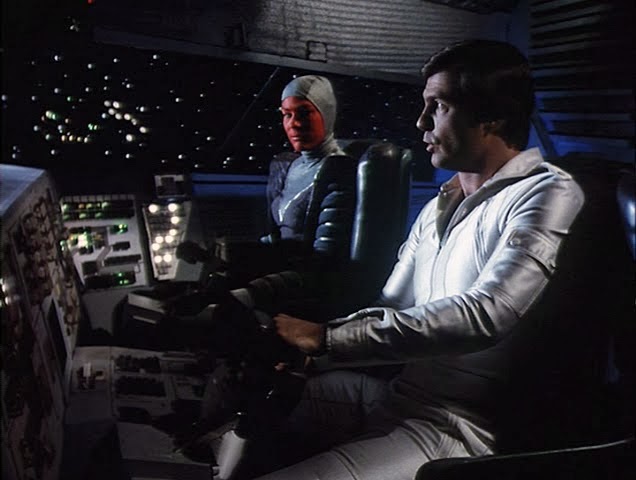 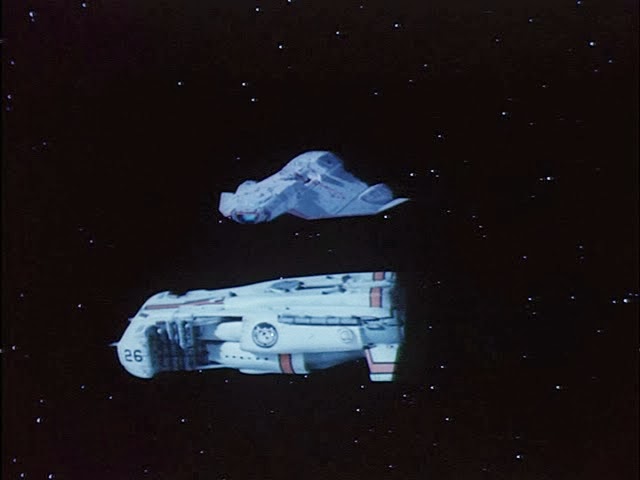 Back on board his shuttle, Nola starts coming on to Buck Rogers. I mean, wow, cannot any woman resist his good looks? Leaving the planet, Buck heads for the nearest Stargate, only 20 minutes away. From there, he will catch up to the freighter in 5 minutes. So, the Freighter went through one Stargate to fly 6 hours to another Stargate that will take them through the Stargate that is only 20 minutes from Vega V? Why didn't the first Stargate take them all the way? Oh well. In Dr. Huers office, Twiki updates Huer that Koven warships have penetrated the colony's outer defenses. They have 10 hours (or by 2:00am) before they are in striking range, giving Colonel Deering a 4 hour margin of safety. Twiki will be monitoring all the subspace channels for updates. Not sure why, Deering orderd that no subspace transmissions are to be made or accepted, and the Koven are jamming all other subspace transmissions off Vega V. I would think that Twiki is going to have a quiet night. Buck and Nola exit the Stargate and are right on top of the freighter, visible in their Starboard view port. Buck sends out a Code-Blue distress signal. All Directorate ships are obliged to respond. Lt. Rekoff detects the signal and the shuttle 2000 kilometers astern (1243 miles). Wilma orders that the shuttle be tractor beamed into the Cargo Area 2 and held there until they determine who they are. Buck and Wilma work together and subdue Nola. Buck makes plans to destroy an asteroid to fake the freighter's destruction. Wilma indicates they have a contraterrene warhead that they could use in Hanger "B". With only 9 hours remaining out of Buck's 12, Wilma and Buck are off to destroy an asteroid. Or are they? 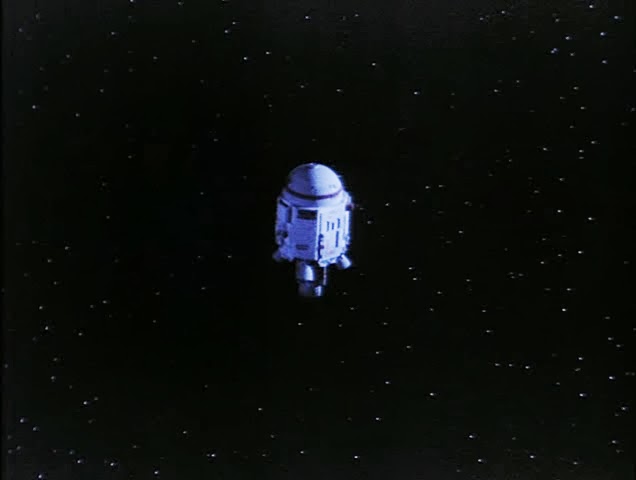 Buck renters the Stargate and the bomb should go off in the next 23 seconds. Wilma ejects the warhead and takes off in a flash and goes...what, back to Earth? The warhead explodes and satisfies Commander Reev. What happened to blowing up an asteroid? Once Buck arrives in 30 minutes, Reev will let Buck go, but keep Leila. Commander Reev mentions that he knew that the freighter was on a Directorate Mission. I thought it was a Federation Mission. Did Reev know that the Directorate where hiding 6 operatives on board to help aid Vega V? Nah, it was a writers slip, I'm sure. Buck charges in to the rescue, but is quickly grabbed. Commander Reev gave Buck a 33% chance that he would not destroy the freighter and planned for it. He thinks of everything. Buck is ordered to be killed, but Leila jumps in-front of him and is shot instead. In a rage, Buck attacks and takes out the two guards and Commander Reev. Leila then dies in Buck's arms. Buck is heart broken.

Buck takes three weeks off in the Antares system. For a welcome home present, Dr. Junius found an old entertainment clip from the 20th century (aka a movie). The clip is labeled "Film Archives: Documentary 53423", however the film is Steven Spielberg's Jaws. I'm sure it's a great nature documentary about aquatic life. 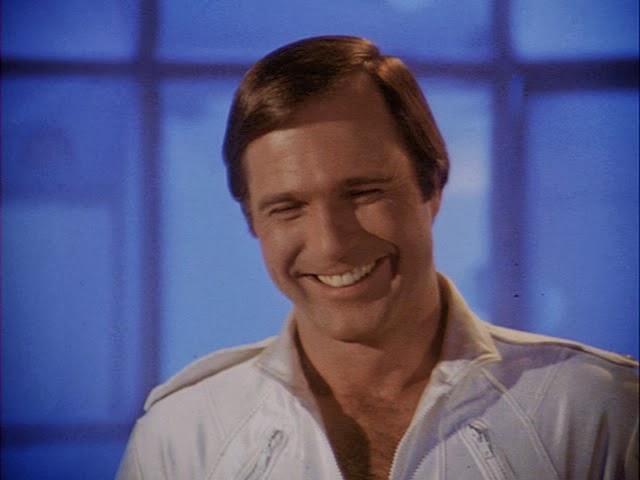 City-On-The-Sea: Just 30 minutes outside New Chicago. Urban Complex, located on the tip of the Mississippi Delta, New Orleans. Home of the Festival of Masks (aka a 25th-century Mardi Gras).