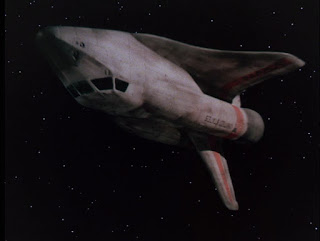 According to Universal Heartland (the miniature company that built the models for the show), there where two Ranger 3 miniatures made. The First one was clean (without dirt), as it first appears in the show. The Second was for when we see the ship again after it's been floating in space for 500 years. The mold for Ranger 3 was reused to make a third shuttle, that was seen in Season 2. Hartland added a few greeblies and modified the wings and removed the fin for the Season 2 shuttle.

Mark Bradley was able to obtain a casting of Ranger 3 that was taken off the original miniature.
Posted by Patrick Kenney at 8:15 AM