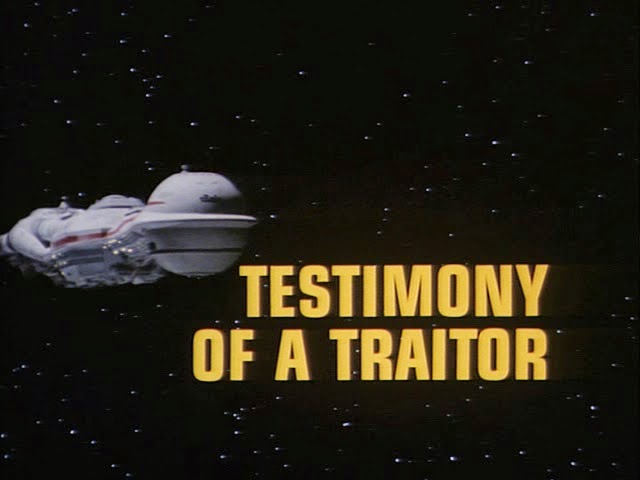 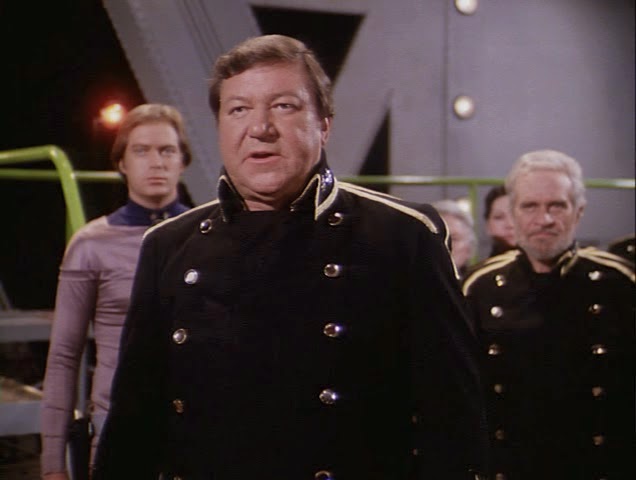 The Searcher is headed back to the Vega Quadrant after a quick stop on Earth for Fuel and Supplies just 12 hours ago. Just then, the Searcher is ordered to return to Earth and Buck is to go to the Hanger Deck. By the time Buck reaches the Hanger deck, an Earth Shuttle, caring Commissioner Bergstrom, will dock with the Searcher in one minute. As soon as Commissioner Bergstrom boards the ship, he places Buck under close arrest for the suspicion of High Treason. Oh Snap! This is the second time that Buck as been accused of treason. Captain escorts Buck to the wardroom. General Arnheim leads the hearing. Buck is being accused of instigating the Holocaust in the 20th Century that destroyed the Earth. So, because the people responsible for the Holocaust died during the bombardment, Earths survivors never been able to have a peace 'cause they could not charge or blame anyone. To rectify that, they have picked Buck to place the blame. Sounds more like a political move then justice. The law is always out to make someone accountable for accidents and other catastrophes, that they don't really care about the individuals true intentions or guilt. Berstrom produces a led box that was found in the ruins of the headquarters of the United States Air Force North American Air Command (USAFNAAC), located deep in a Mountain of the Colorado Rockies. Inside the box contains a VHS cassette tape. I am pretty sure that the the tape itself would have degraded in 500 years. But who knows if the led box was air tight. 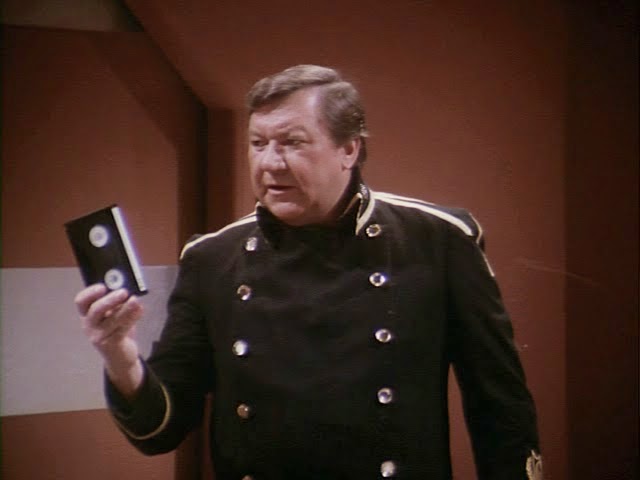 On November 22, 1987, Major Jim Peterson records a testimony that Earth had already been attacked. He produces a tape that was recorded on January 8, 1987, that proves the involvement of Air Force personal in the bombings. There is nothing that is more annoying in film when they show a video that is supposed to be surveillance footage or something someone recorded from their handheld camera that is professionally edited, and with multiple camera angles that wouldn't be possible. The video indicates that last week Buck was approached about helping with a project the Air Force has. The Civilian Administration has backed down to the foreign provocation. This has allowed their enemies to gain superior tactical nuclear weapons. Buck agrees with General Myers that a presumptive strike on their enemies is the only answer to protect against this potential threat. The catch is a nuclear strike would require a simultaneous launch of all the I.C.B.M. in their arsenal. Which can only be done if they had the Master List of all the Top-Secrete Launch Codes. Only the Chief of Staff and the President of the USA have access to these codes. Buck has to somehow get the codes so they may launch their missiles before the year is out. Myers indicates that General Roberts informed him that Buck was interested in piloting the next deep space probe. If Buck gets the codes, then Myers will see what he can do to get Buck in the pilot seat. Colonel Turner escorts Buck from the room. The tape ends. The hearing will reconvene tomorrow where Buck will be able to defend himself. 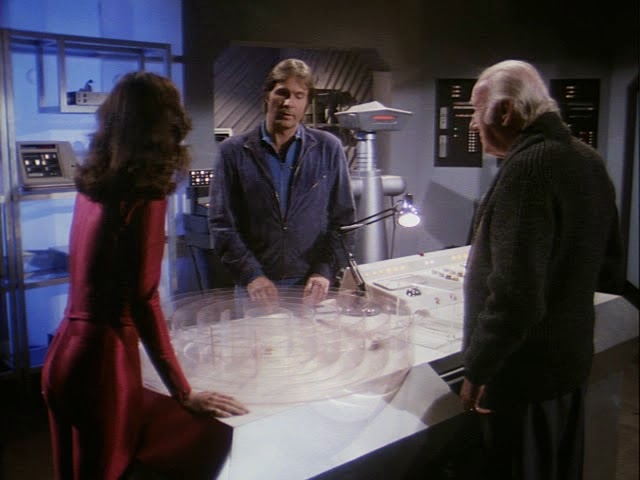 Insert FX shot from The Hand of Goral of the Searcher above the planet Vor-Deeth, and pretend that it is the Searcher above planet Earth. Wilma visits a depressed Buck Rogers in his room. He has two armed guards outside his door to keep him from going anywhere, but they have no issues with Buck having visitors. Buck confides in Wilma that the accusation of Treason hurts his feelings, but the idea that his best friend, Jim, thought he was a traitor hurts him even more.Wilma brings Buck to Dr. Goodfellow's laboratory because he is working on something that will be able to prove Buck's guilt or innocence. Now the thing that really bothers Buck is he is afraid that he could be guilty of what he is being accused of. With a little help from Goodfellow's Optical Engram Imager (O.E.I.), they will be able to look into Bucks head and watch his memories like a movie. Recent amendments to the evidentiary code permits and O.E.I. as testimony in cases if they choose to use it. Kind of like a polygraph machine that projects memories as fact. Twiki comes into the lab with a Petition of Support, signed by all the crew. From the Admiral, to the guys in the engine room (greatest to the least). 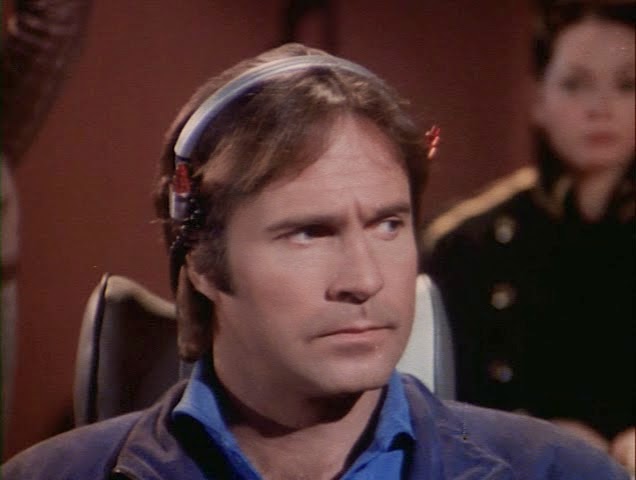 The next day at the hearing, Goodfellow hooks Buck up to the OEI. He remembers driving down a road to meet a man. Here we go again seeing Buck's memories as a video recorded outside his eyes. The Colonel provides Buck with a camera that is fully automatic with infrared flash, and another contraption to decode the combination on any safe. Now all Buck has to do is get into the crypto room by next week. His own memories would appear to be hurting his case. The memories in Buck seem to come to him like a psychic would when they get visions. Hopefully Buck's next memories will have better luck in portraying his actions as Heroic then treacherous. Buck tosses a grenade that blows up a jeep. The men guarding the door run from their posts to investigate. Alarms sound, Code Blue Situation is in alert. Buck plants another explosive inside a garbage can. The explosion alerts more men away from their stations. I guess he is creating diversions that will allow him to go about the base unnoticed. "Sections A through J initiate fire retardant systems" Buck throws a smoke grenade in the vent system. The smoke comes out into the code room. Buck knocks on the door to the code room claiming to be the Air Police (the what?). The goobers in the room fall for it, and let Buck in. He convinces the men and women in the code room (who are under orders not to leave the room unattended) to leave the room. They run off and none seem to look back and wonder why Buck isn't with them. Buck uses the safe cracker. The combination is 68, 3, 85, 0. Buck takes out the code book and takes snap shots of each page. End memory. They recess for lunch and will reconvene at 1400 hours (2:00pm). 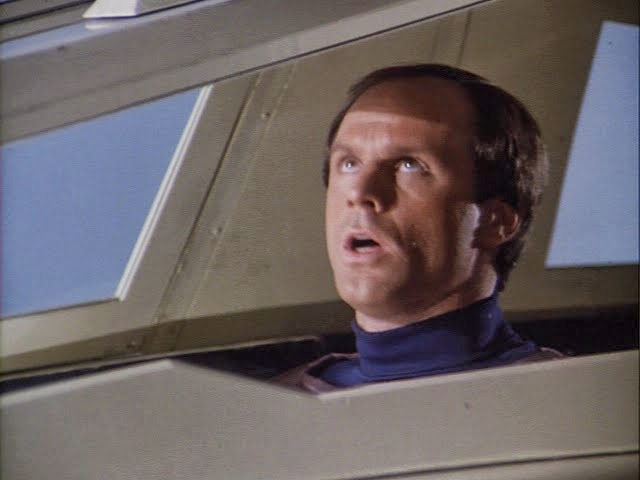 Despite the OEI showing the images from Buck's memory, he insists that he has no memory of the events. Asimov announces that the counsel has come to a verdict and no longer need to hear/see any more testimony from Buck. When they reconvene in an hour, they will dispense their justice. Buck has another flash of Mt. Rushmore. The image was so powerful in his mind that it actually hurt. Hawk is convinced that Buck must go to Mt. Rushmore to jog his memory of what really happened. Hawk and Wilma plan a jail break to get Buck to the planet. Buck and Wilma take off in a Starfighter. Shortly after they launch from the Searcher's hanger, Wilma's Starfighter, piloted by a marine, is sent out in pursuit with orders to shoot if Buck does not willingly return. The Starfighter opens fire on Buck who is now flying away from Earth(?). The ships lasers change color from yellow to blue to yellow-green. Hawk is delayed by a group of Marines who tried to prevent his taking off, but he managed to make it to Buck's rescue just in time. They reused the FX shot from The Time of the Hawk of Hawks ship clamping down on the cockpit of the Starfighter. Only this time the negative is flipped. 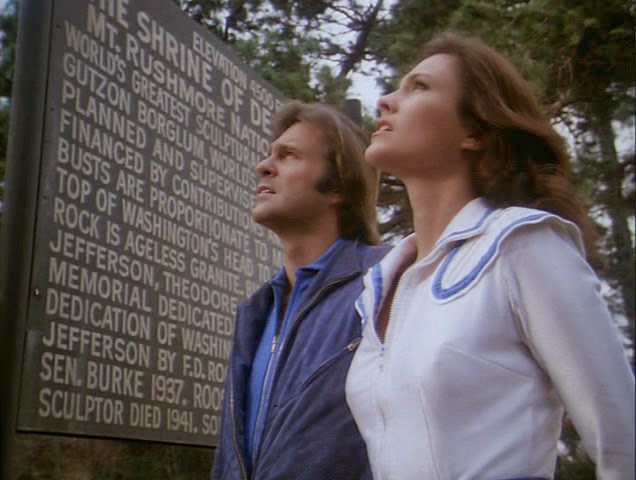 The pyramids in Egypt, the Aztec ruins in Mexico and Mt. Rushmore are the only man made things still standing since the Holocaust. The caretaker, Crawford, greets Wilma and Buck to the monument. Also at the Mountain is the Presidents Bunker. In 1986 the President had a bomb shelter built, just encase a nuclear war broke out. Coincidence? I guess Hawks instinct was right. Upon entering the Presidents bunker Buck recalls a memory of being at Mt. Rushmore talking to the President 500 years ago. Two armed men show up and take Wilma and Buck into custody and bring them back to the Searcher. Buck is hooked back up to the OEI for one last testimony to prove his innocence. Commissioner Bergstrom seems adamant to not allow Buck to continue in his OEI visions. I would think that since so far that the OEI has done nothing but incriminate Buck further, that more evidence of his guilt would be welcomed by the Commissioner. Instead, he almost seems afraid that Buck may in fact be innocent, and doesn't want that to come out. 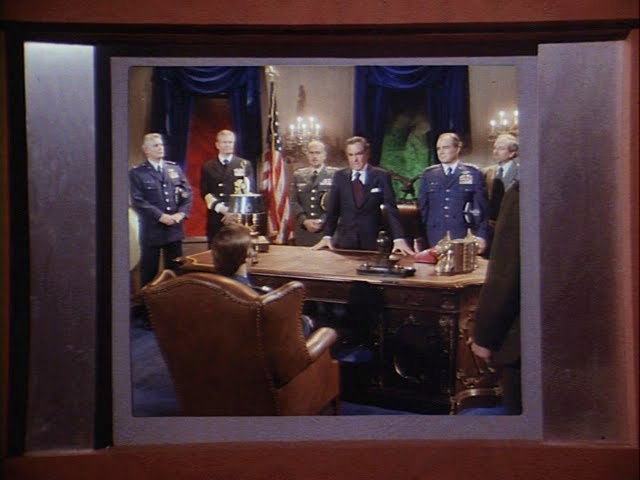 The video shows the President talking to Buck. Less than a week ago, Air Force Intelligence became aware of a conspiracy planned by several high ranking Air Force Officers. They plan to take control of the countries I.C.B.M.'s and use them as a first strike attack against America's enemies (referred to as 'the other side'). They want to recruit Buck to be their spy and infiltrate the conspirators and learn as much as he can. To be convincing, Buck will undergo deep hypnosis to play the part of a conspirator. Well, that's all the council members on the hearing needed to hear. Buck is acquitted of all charges. Congratulations Buck for proving your innocence once again! 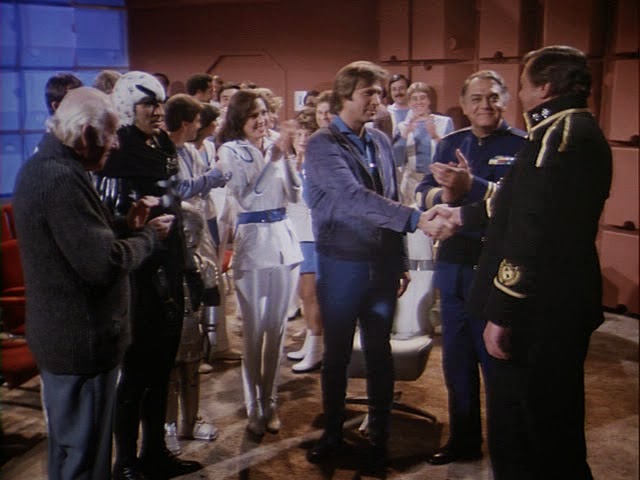 Fusion Reactors are at full power. Asimov orders the increase of speed to Plasma Drive. The Searcher is moving out of the Solar System. They have been out of radio range for two hours. Twiki knew Buck was innocent all along, because of his Robotic Intuition. Which is a lot like Feminine Intuition, but more mechanical. So, uh, the conspirators planned on bombing the other side first because they feared a nuclear attack. Buck foiled the conspirator's plans for a first strike attack. However, it seems that the conspirators fears where justified, as the other-side did attack with nuclear weapons. The US returned fire and dropped nuclear weapons on them. Why did the other-side strike first? Did they learn of the plot to bomb them so they attacked? Or where they planning on attacking the whole time? Or was there some other reason? I guess we will never know... 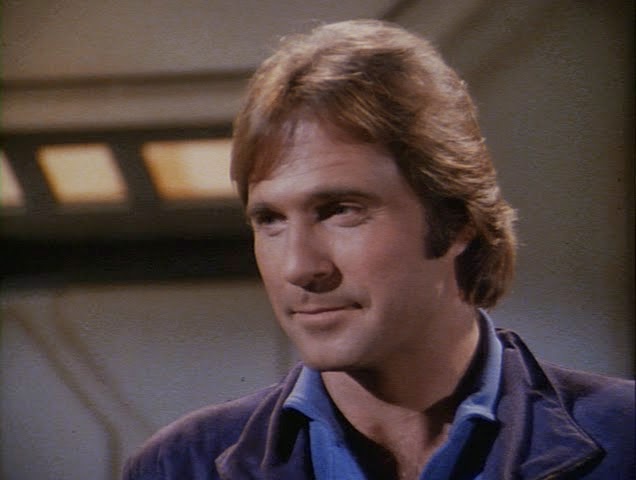