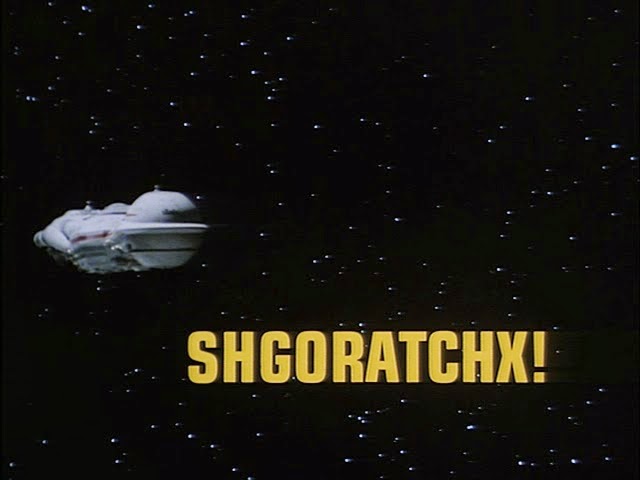 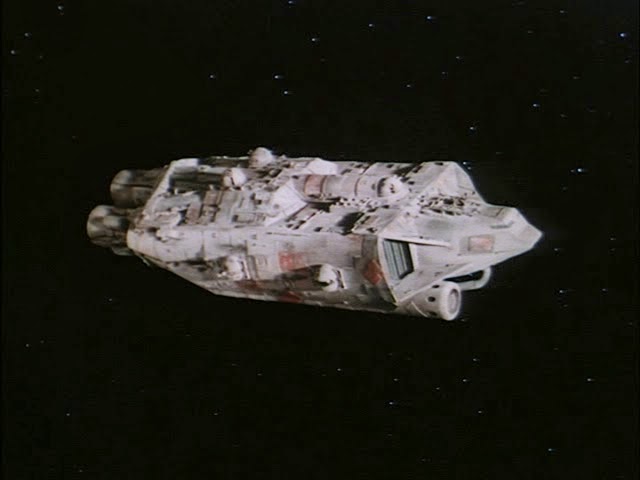 Hawk reports in with Admiral Asimov that morning, that he was ready to go out on patrol. Asimov informs Hawk that they found an immobilized derelict ship in Sector 5 and are approaching it for inspection. Asimov comments that the ship looks like a refugee from the Interstellar Junkyard and is slowly drifting into the freight lanes. Asimov wants Buck and Hawk to check the ship out. Crichton is instructed in awake Buck, who has been on his feet for three days and made it to bed only two hours ago. Crichton awakes Buck and informs him that his presence is required on the Hanger Deck. Crichton remarks that dreadful things came out of the 20th century such as war, women's liberation, and the Holocaust. I am not sure if I would list women's liberation in the same category as the Holocaust. Is this a sexist remark in there or a sexist joke? Anyways, Buck better hurry to the Launch Bay (wasn't it the Hanger Deck?). Buck is looking a bit scruffy with his 5 o'clock shadow. Insert the same FX shot of the shuttle leaving the Searcher that we have seen in almost each episode prior to this one. The Shuttle docks on the side of the mystery ship, and Hawk, Buck and Crichton board. 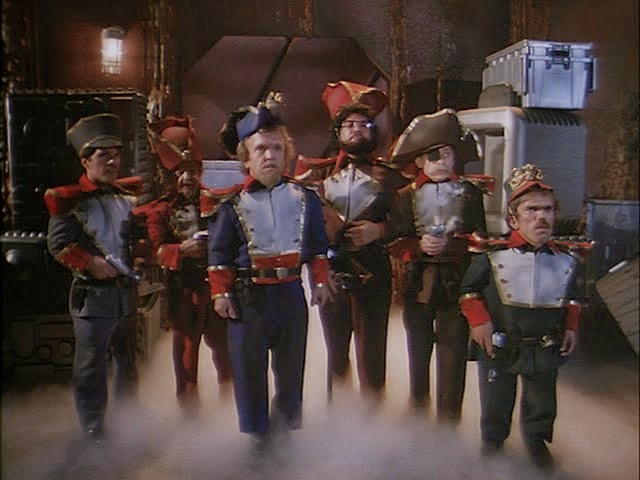 Crichton detects a warm blooded inferior species on the ship. A door opens and a horde of seven Zeerdonian men come racing out with pop guns that they shoot at Buck and Hawk. Little pellets seem to bounce off their clothes. They were yelling in their native tongue, something they do only when they are irritated. They charge them with boarding their ship without permission, which is perceived as an attack on Zeerdonians. Buck tries to assure them that they thought their ship was derelict, and could cause an accident because it is drifting into shipping lanes. It appears that along time ago, Sarlons boarded their their ship to pirate their cargo. They assured Buck that their weapons worked at this time. Sometime after that, their energy cells imploded, causing their ship to be adrift, some 200-400 years ago. Their mission is to proceed to the distant side of star Sitof 43 (a bomb disposal star) and dispose of their cargo, 1,000 Solar bombs. Enough to radioactive the entire area for over 50 million years. When the ship lost its energy the stabilizer destabilized. Now the bombs are highly volatile. 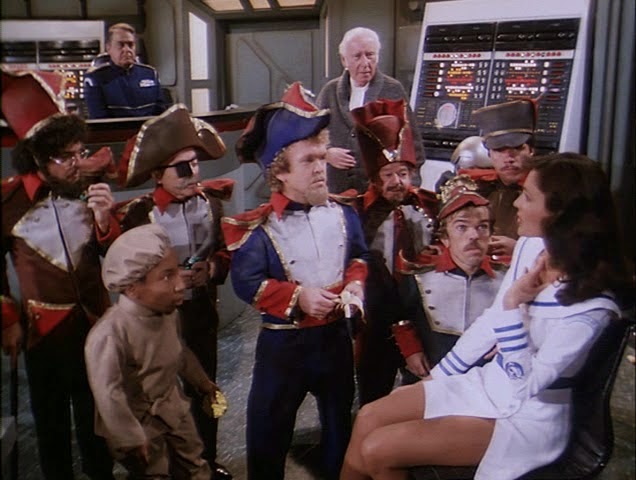 Buck agrees to set up a magnet beam to take the ship to Sitof 43. The Zeerdonian's are welcome on board the Searcher during the trip. The Zeerdonian's are taken aback by the awesomeness of Searcher. Crichton sets up the coordinates for the magnetic tow. Buck takes his new guests to the kitchen, while Hawk leaves for patrol. The Searcher must not exceed 3/4 speed while the ship is in tow. Wilma suggest going to Plasma drive so they would make it to the star a lot sooner. Unfortunately the bombs themselves would not be able to handle the kinetic energy that would be put on them if the Searcher went to Plasma drive. Buck brings the Zeerdonians to the bridge of the ship where they are shocked when they see Wilma Deering. It would seem that they have never seen a woman before. They even comment that Wilma has pretty breasts. I suppose that Zeerdonian women do not have breasts. Wilma is flattered, but gets up quickly and runs way. The Zeerdonians take no time in showing off how annoying and out of control they are. General Xces sits at Wilma's station, where there is an audio-sensitizer energy control panel. Admiral Asimov orders the General not to touch the control, but he slides a card into the machine anyways, sending the Searcher into a sharp new direction. Crichton falls over and lands on something that helps keep him straight on his back, but dents his head. I guess the art department didn't want any pressure applied to his neck. Crichton is brought to Dr. Goodfellow where is positronic brain is removed. 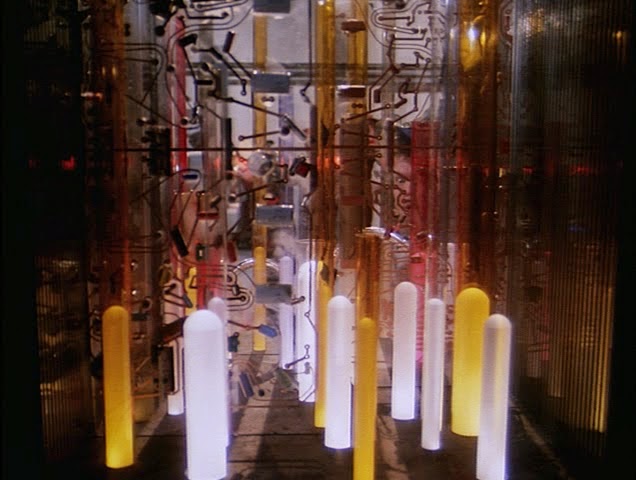 Lieutenant Martin informs the crew that the Zeerdonian's have left the control room and seemed to have disappeared. Wilma suggests to look in the magnetic power plant as it is the only place where scanners are non-functional. In the magnetic power plant, the Zeerdonian's comment that their equipment is 2000 years old, making the Searchers more superior to theirs. They make plans to bring back samples of the Searchers transferral system so they may be decorated as Heroes. Course they are assuming that since they set off on their mission, some 400+ years ago, that their planet hasn't progressed in technology. They could be steeling stuff from their hosts only to find out that their planet has surpassed the Searcher. A highly probable possibility, as their ship alone is 2000 years old while Earth only entered space around 530 years ago. General Xces opens a panel that he suspects to find the Searchers Energizing Patterns. Pop! Zing! Boom! The circuits explode. Buck rushes over to the Fire Mist control panel and enters the code 574. The Zeerdonian's seem to be excited about their little destruction. 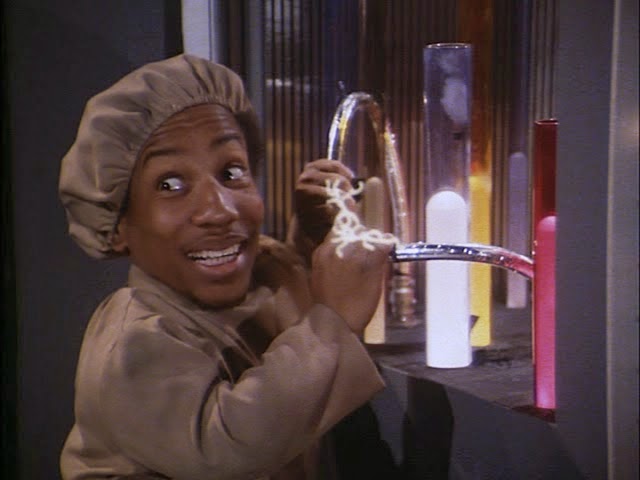 Asimov orders the emergency power synthesizers to be turned on. Well, since the Searcher has a complete power failure due to the annoying Zeerdonian's, it is now on a collision course with the ship they are towing. The tractor beam controls have been shorted out. The Zeerdonian's offer to help, as if they have this uncanny ability to fix advanced technology, but could not fix their own ship in the 400 years they have been drifting. I am sure they would be a big help. In less than seven minutes, the Zeerdonian ship will smash into their aft section. Dr. Goodfellow is also an electrical engineer as he is fixing the power problem. He discovers the transducer wire melted clean away. Private Zedht is 'volunteered' to be a jumper cable to connect the two ends of the transducer. Asimov orders Lt. Martin to reduce speed to warp three (thought they could only go 3/4 speed) and to reestablish magnetic stabilizers. Wilson finally makes it down to the Magnetic Power Plant to fix the transducer wire. 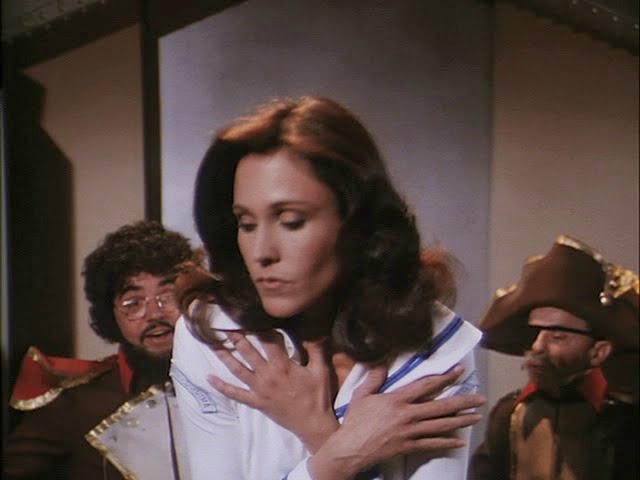 Buck hands the Zeerdonian's off to Wilma, per Asimov's orders.Wilma escorts them to the lounge and locks them in. But with a little 'Off-think' chanting, they are able to use their mind powers to unlock the door. They are now in search of something to eat. On the Bridge Colonel Deering radios the ship that they are entering Asteroid Belt, A-64. Deflector shields engaged. The asteroids seem to bounce right off the shields as the Searcher fly's through. Private Zedht walks away from the Generals and ends up in Buck's room to get some sleep. Buck gets out of the shower only to find Zedht in his bed. Kind of disturbing. In the Main Weapons Bay, the Generals begin shooting at the asteroids. In their desire to shoot asteroids, they turned off the defense shield, causing the Searcher to collide with an asteroid. Buck has to report to the Bridge. The Zeerdonians lock Wilma in the room with them and use their 'Off-think' mind powers to examine Wilma in the nude against her wishes. While she does laugh and act shy about it, I cannot help but think there is a little part of her that is flattered and wants it. But her modesty keeps her covering up and saying no. Regardless, this little scene would be considered sexual assault, and I am quite shocked at this scene. 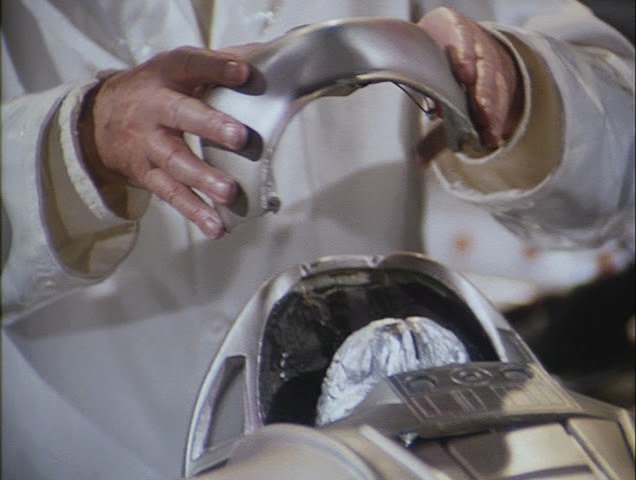 The impact with the asteroid caused the main and backup gyros to go out of equilibrium. The Searcher is now heading straight for the seventh sun of Khyphotak. They attempted to overpower the gyros hydraulically, but it shorted the entire control system, including the leads to the power plant, shutting off all communication. They cannot change direction or reverse. Dr. Goodfellow suggests that it would take four hours to repair the damage. Unfortunately, in less than two hours, the Searcher will hit the sun. If only Crichton was operational, as he has the plans in his brain that could fix the leads on the Searcher. Twiki suggests putting his brain into Crichton's body so that he could make the repairs and save the Searcher from colliding with the sun. Am I the only one who thinks that putting Twiki's brain in Crichton isn't going to have the affect they desire, because the plans to do the repairs are not in Crichton's body, but his brain? Dr. Goodfellow, being rushed, cut several leads to Twiki's positronic cortex, and asks Buck and Wilma to replace the leads to their original length before they where cut. 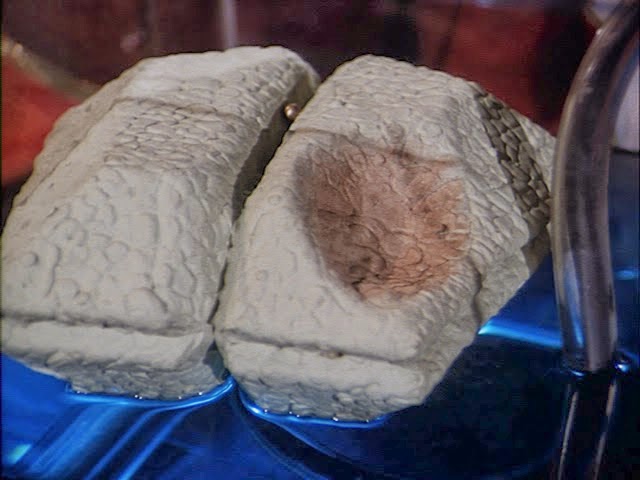 Crichton is brought to the bridge where he begins at the main juncture of the gyro. Crichton did it, and now the ship has regained control and is now back on course. Dr. Goodfellow reinserts Twiki's brain back in his body and begins to slowly administer energy to bring him back around. The Zeerdonian's use their mind powers to inflate Crichton's brain, popping the dent out. They hook Goodfellow up to a mind reader, so the Zeerdonian's can On-Think, and determine how the brain originally functioned and its original shape. The dent on the brain seems to have switched sides. With the brain back to its original shape, Goodfellow puts it back in Crichton. They also turn on Twiki but nothing happens. The Zeerdonian's On-think again, and Twiki is back to his normal self. Oh and so is Crichton.

The Searcher arrives at Sitof 43, the repair station (wait, wasn't is a bomb dump site?). The planet will have the Zeerdonian ship on tractor beam once they leave via that air lock. The Generals are excited to get back home, because once they do, they will all be knighted for saving the lives of the people on the Searcher. Not exactly what happened, but who cares. They are just glad to finally be rid of the Zeerdonian's. So, now that I am at the end of the episide, I cannot help wonder how the title of the show relates. I am, what is a Shgoratchx? Is it the name of the Zeerdonian ship? It's not a real word, so whatever it is, it doesn't make sense. 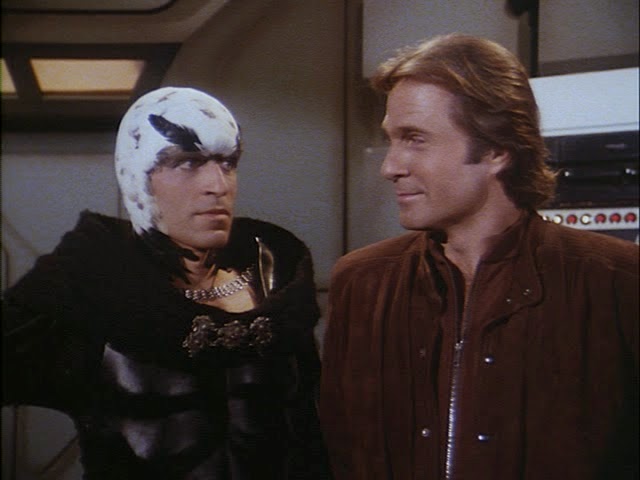 Facts learned in this episode: