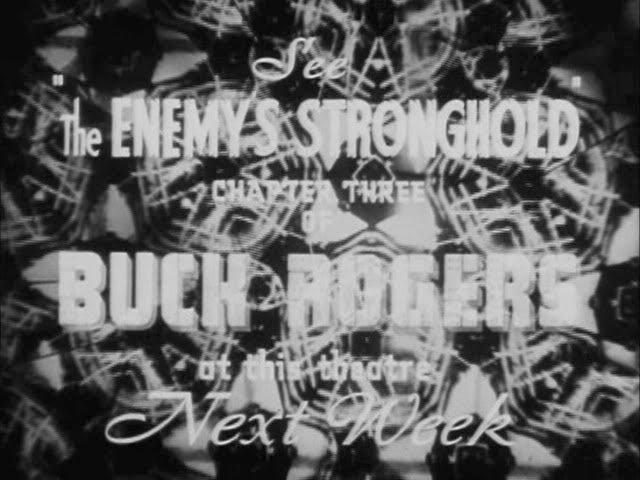 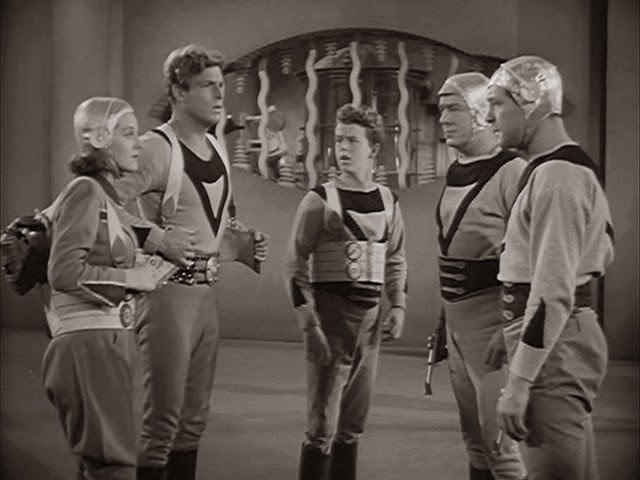 Instead of dropping the wreaked ship to the ground, Dr. Huer requests that the ship be brought down with a crane for examination. Using their gravity belts again, Buck, Wilma and Buddy jump from the ship. The film used looks like the same footage, if not the same background, for when they landed on Saturn. Once they land on the ground they are immediately arrested. The Lt. Officer is under orders to arrest anyone who exits the ship alive. The Lt. must report to the officer of the day, and Buck and pals go to Kragg's office to discuss what happened. Buck reports that their visit to Saturn made things worse then if they had not gone at all. Instead of getting help from the Saturnians, they instead convinced them that they are blood thirsty Revolutionaries and Kane is a Humanitarian. Kragg fears that if Saturn aligns with Kane, it would result in the enslavement of all their people. 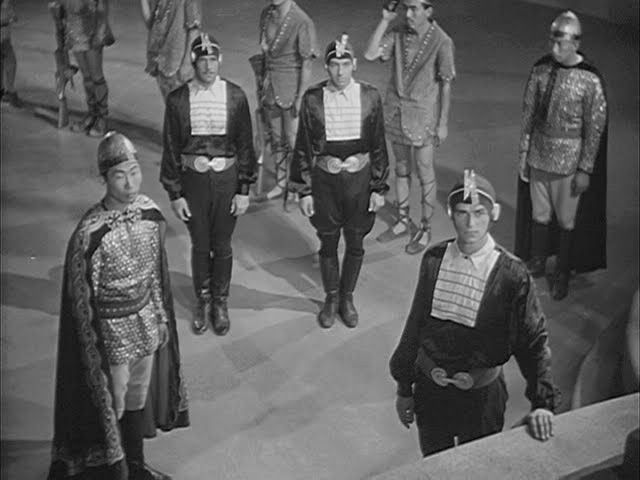 Back on Saturn, Aldar has Captain Laska on trial. He instructs Prince Tallen to go to Earth with Laska to verify Laska's claims that Kane is a just man, who rules the world with a kindly hand, and needs Saturn's help to maintain peace and justice against the revolutionaries. Aldar has signed an agreement of peace that Prince Tallen is to take with him for Kane's signature, assuming Tallen is satisfied that Laska's claims are true. If Prince Tallen isn't convinced of Laska's claims, then there will be no treaty. Tallen, Laska and all his men cram into one of the Tunnel Transport cars and head off to Laska's ship. Lt. Patten Greets them at the ship. 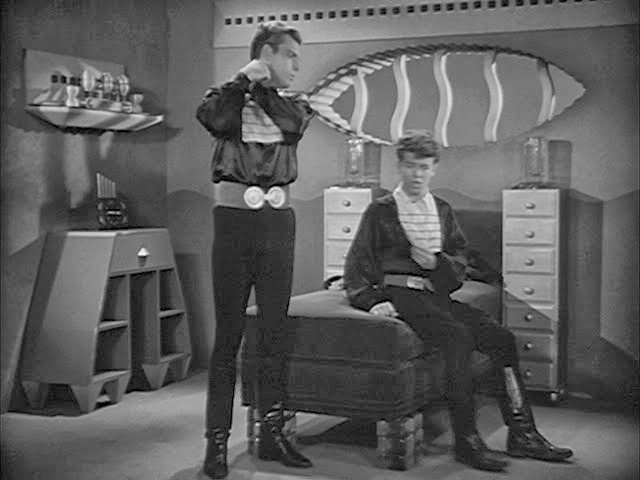 Dr. Huer spots a Killer Kane Ship flying overhead. Buck confirms that it was the sister ship that attacked them on Saturn. Buck asks if they have any spy's in Killer Kane's army. Wilma indicates that they have tried, but they all have been discovered, captured, and put into Kane's Robot Battalion. Buck volunteers to sneak into Killer Kane's camp wearing a Killer Kane uniform. His odds are 1 in a thousand, but Kragg agrees to Buck proposition. Buck gets ready in his room and Buddy comes in all moody and depressed that Buck is leaving without him. Buck says that he wishes Buddy could go but...that's all Buddy needed to hear and he is off like a shot to Marshal Kragg's office to ask to go with Colonel Rogers (I  guess Buck got a promotion when joining the people of Hidden City). The Air Marshal agrees that Buddy could help Buck but cannot consent to his going. Buddy however was gone already before Kragg finished his thought. All he needed to hear was that the Marshal feels Buddy could be of help. 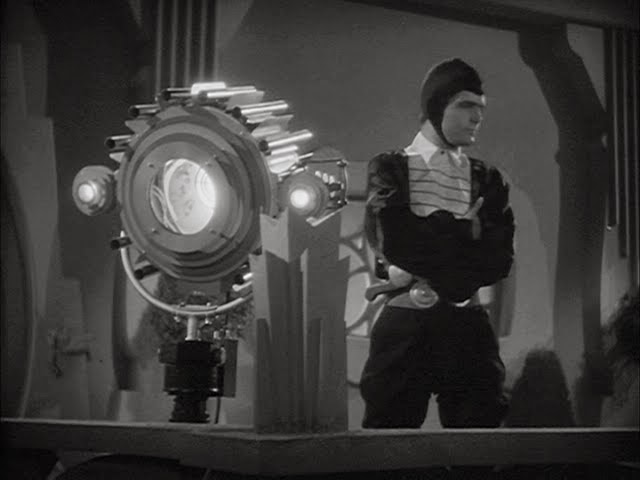 Captain Rankin fly's Buck and Buddy to Killer Kane's city. Their flight takes about an hour to get there, covering a little less than a thousand miles, putting the speed of the ship at a thousand miles per hour. Buck requests that once they arrive, Rankin is to cut the speed and circle around the Palace where he and Buddy will bail out. Tallen meets with Leader Kane and is impressed with the grandiose of the city of Earth. It's interesting how Buck and them can fly a ship right up to Kane's building with no resistance and they have never thought about attacking the building to rid of Kane. Rankin says goodbye to Lt. Rogers (wait, did Rankin not get the memo of Buck's promotion to Colonel, or is this a writers error?) Buck and Buddy jump out of the ship and land on Kane's terraces. Unfortunately they are spotted and confronted by a guard. The guard demands to see their Registration Cards. Buck hands him the card he got off his uniform, a John Keaton. The guard instantly knows they are spies but Buck subdues him, takes his pistol and ties him up. No gag is necessary, I am sure he will be quiet. 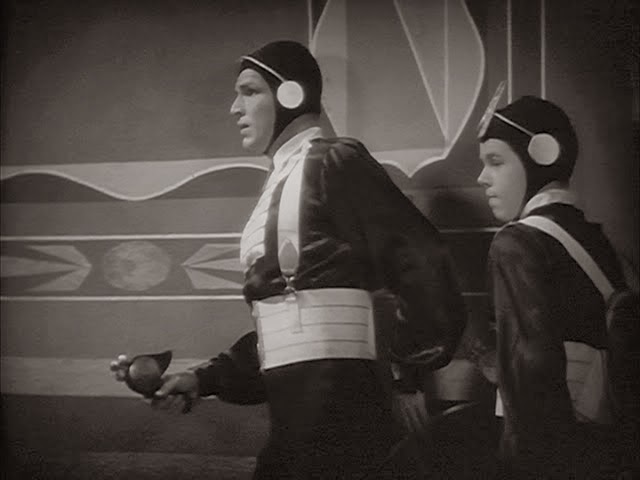 Kane, Tallen and a table full of other important counselors are ready to sign Aldar's treaty. Without a moment to loose, Buck interrupts the meeting and demands that they hand the treaty over to him, unsigned. Buck shoots down two guards. Buck intends to show Prince Tallen who Kane really is. He orders Kane to the Tele-Vi. Buck tells Kane to turn on the camera to the Dynamo Room. Instead he shows the outside view of the city. No, No, that wont do. Buck said the Dynamo Room! Kane finally complies and turns the screen to show his Robot Battalion of men wearing steel caps, or amnesia helmets, invented by Kane's Scientists. Helmets that rob men of their minds and will. Tallen is convinced of Kane's cruelty and decrees that he will sign a treaty with Buck's leaders instead. 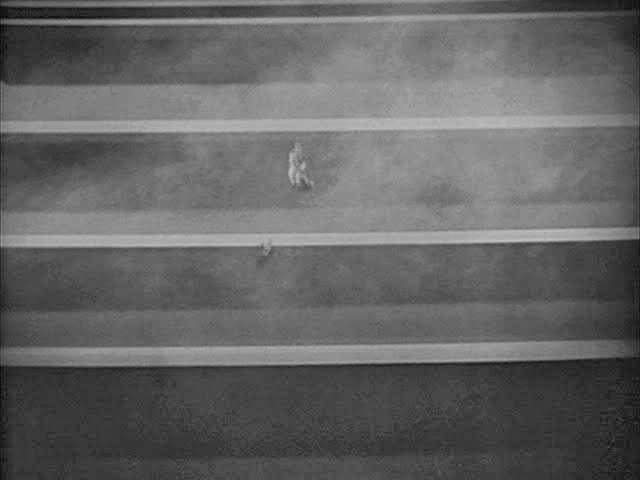 Buddy hands Prince Tallen a gravity belt, which I am sure is the harness for the cable wire that lifts them off the ground. Buddy and Tallen jump from the window all the way to the ground. Buck soon follows. A city wide announcement goes out to all troops, police patrols, and citizens be on the look out for three fugitives, two from the hidden city in Soldiers uniforms, and one is a Saturnian. I'm not sure how the description of the spy's being dresses like Soldiers is going to help, cause they wouldn't know a real soldier from a fake soldier. Their only give away is they are traveling with Prince Tallen. Well it doesn't take long for them to be spotted and shot with a ray gun. The prop that the actor lifts up and tilts because the thing doesn't move and needs to aim down. 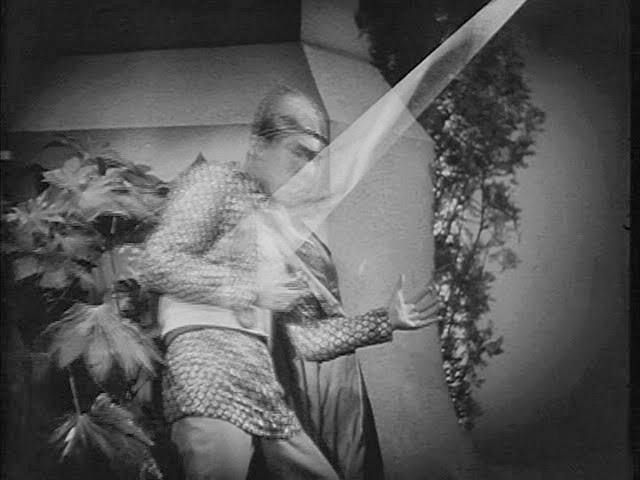