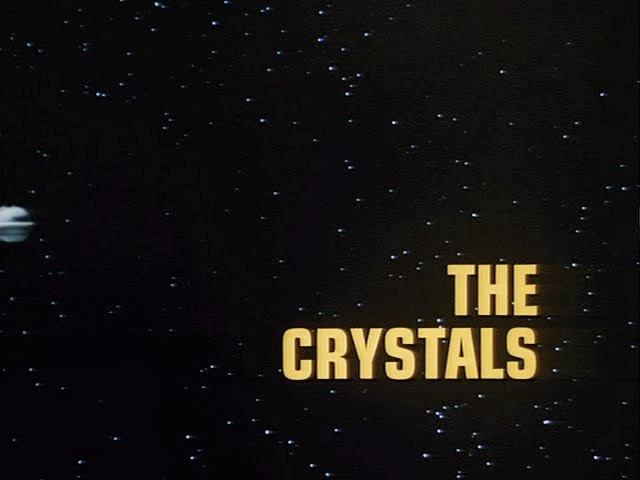 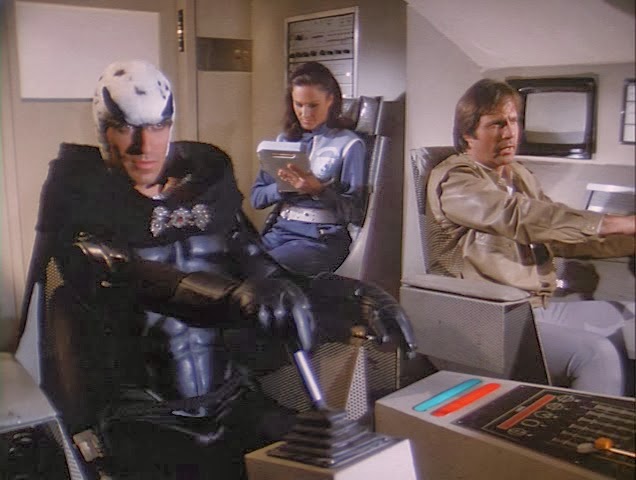 Buck, Wilma and Hawk are searching for Therbidian crystals on the planet Phibocetes. The planet has volcanoes, and the crystals are known to be found in the lava and ash. The Searcher uses the crystals to power their fusion reactors and is currently all out. They were adrift, but with the retrostabalizers they have been able to regain control of the Searcher. Buck lands the shuttle in a forested area on the planet. Wilma comments how beautiful the place is and Hawk sees how prehistoric, and unmolested the woods are. I don't think that the set dressers quite got the look right based on the description from our heroes (You're so fired Francisco Lombardo!). Hawk digs through some ash and finds a small Therbidian crystal. He comments that he doesn't see any more, but he really didn't look. I mean, he had to uncover the one he just found, why would he then assume that he could see more crystals by glancing around the ground? Buck manages to see a charred mummy behind some rocks and decide to bring the humanoid back to the Searcher for study. Hawk and Buck make a travois to move the mummy. Wilma finds more, and larger crystals near the body. I guess there are more crystals after all. Take that Hawk! Once the three of them leave the mummy, it awakes and starts to groan and move! 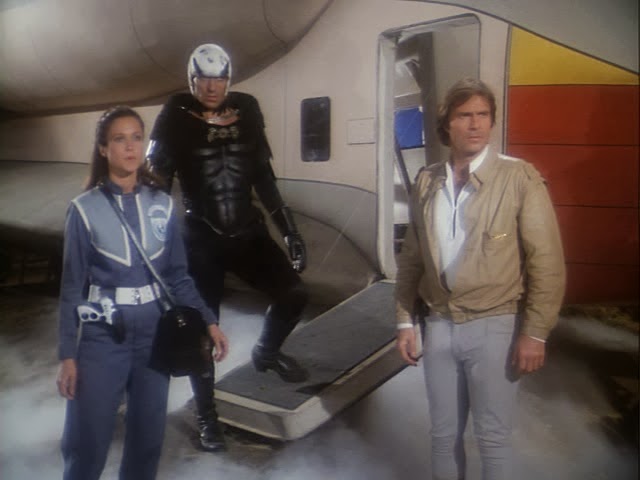 Hawk and Buck manage to drag the mummy on board the shuttle. I guess it stopped moaning and moving when they came back to it. Now why did the designers for the shuttle build the door so short that our Heroes are constantly ducking to get in and out of the ship? Could the set builders not construct something larger due to space limitations? Not to mention that the shuttle itself looks like a wood frame with a kind of fabric wrapped over it to be the ship's skin. Oops, someone is watching them! With Hawks hawk-like eyes, he spots the woman spying on them. All three walk off into the woods to search for this spy, leaving the door to the shuttle open. Inside the shuttle, with the door now closed, the mummy arises! Unawares of the happenings back on the shuttle, and with their weapons drawn, Buck, Hawk and Wilma continue their search for the spy. Now, how come both Buck and Hawk have the larger black pistols, while Wilma has a smaller silver one? It's like there was a conscious decision made to give the men "manly" guns and the woman a more feminine one. Oh look! A freshly broken stick! That is some pretty good tracking skills. Never the less, the mystery woman out foxed the would-be trackers and ended up right back where she started, coming full circle. 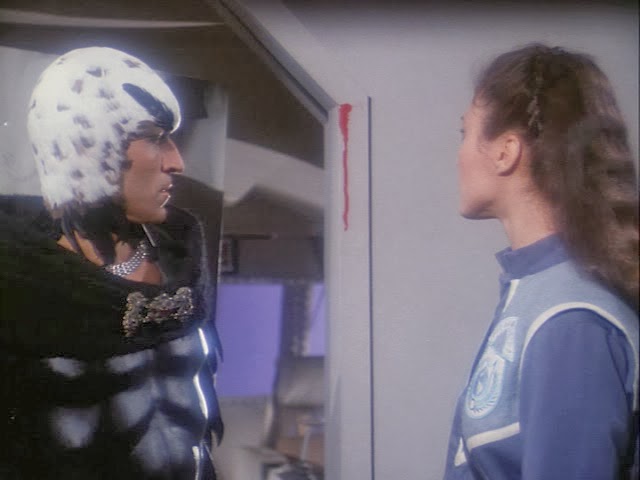 Our heroes head back to the shuttle, only to discover that someone was good enough to open the door to get in, but ripped open the door where the mummy was being stored. They discover blood on the wall from the one who trashed their door. It would appear that the mummy can bleed, as it injured itself ripping the door open. Oh no! the crystals are gone too! Wilma and Hawk seem more surprised at the crystals disappearance than the mummies. Hawk and Wilma return to the Searcher to gather the mining crew, leaving Buck alone on the planet to search for the mystery woman. Buck spots a crystal in the ruff and is taken by surprise when the mystery woman is able to sneak up on him. She names herself Buck Rogers, after Buck Rogers. All the questions Buck poses to her, she avoids like she is hiding something, or cannot remember? 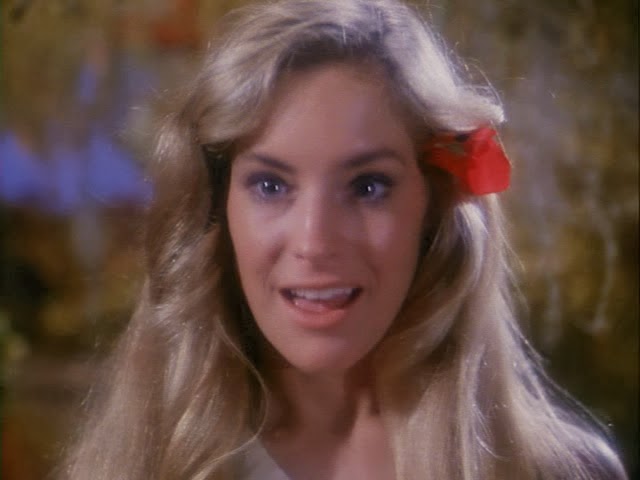 Dr. Goodfellow, upon analyzing the found blood, discovers that it is human, but is evolving at an explosive rate. The hemokinesis behind the rate of change is astounding. Goodfellow requests Crichton to search the archives regarding the planet. It would seem that the information is stored in binary code, a form of storage that is now obsolete. YEAH! Twiki's voice is normal again! Thank you, thank you, thank you! Launch Bay is loading all the mining equipment on board the shuttle. The last item is the field laboratory. They will be ready to launch in three minutes. Once back on Phibocetes, Buck meets the away team with his new friend, Buck Rogers. I mean Laura, or Susan. No, definitely Laura.Wilma wants Dr. Goodfellow to assemble (what, he has to build one from scratch?) an Optical-Imager to help probe Laura's memory. Buck suspects that she has amnesia as she cannot remember the events in her life beyond the last two days. Wilma does some blood work and will use the O.E.I. on her to find out who she is and where she comes from. Wilma and Buck are interrupted by a laser blast outside the medical tent. Chief Petty Officer Hall was grabbed from behind as he was leaning over examining some crystals. He managed to get a shot off, scaring the creature off. Buck and Johnson go out to track the mummy monster down but come up empty handed. Back at Camp, Buck orders Lee to be on first security watch. 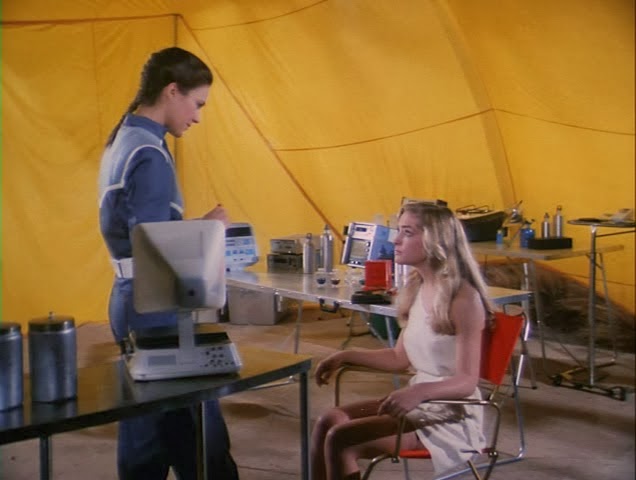 Wilma discovers that the genetic make up of Laura is identical to the mummy monster. Their DNA is the same, but they look so different. Laura overhears the conversation and is distraught. Later that night, Johnson is on watch (guess Lee's shift was already over) when the mummy monster attacks. It bear hugs Johnson till he passes out, then grabs all the crystals that the mining team as collected so far. He also grabs Laura, but lets her go after he is shot at. Dr Goodfellow is still building the Optical-Imager and suspects that he will have it completed by morning. The retrostabilizers are almost out of fuel. Once they are empty, the Searcher will be drifting in space once more. What happened to Newtons first law about an object at rest? Wouldn't the Searcher stay put forever until they get power again? The Searcher finally gets word from the Federation Tracking Command regarding any lost ships in or around Phibocetes. Lieutenant Martin informs Admiral Asimov that the reports is negative. No ship has been reported missing in the system. 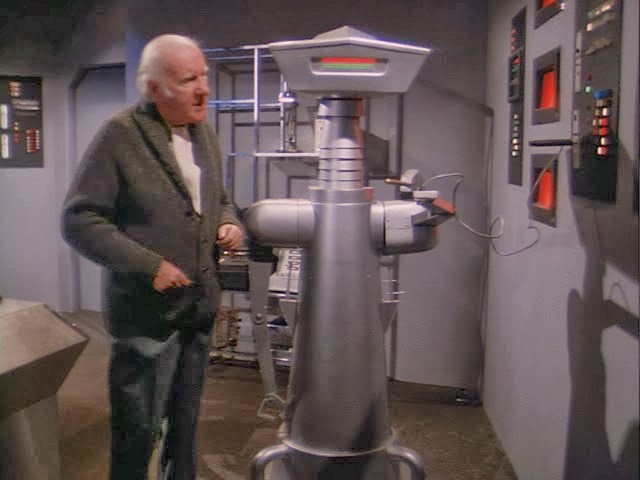 Crichton comes in with his discovery regarding the planet Phibocetes. He discovered that before the 22 century, over 300 years ago, there was a race of Phibocetian's. Didn't Asimov just say that the records for Phibocetes indicate that the world has been uninhabited for three centuries, indicating that there used to be people there in the 22 century? He proceeds to explain that the people go through two stages of devolution. Crichton shows a picture of a man, then a monster, and then a mummy monster as the final stage. Wait, doesn't that make it three stages Crichton? It would appear that a Philbocetes species has a catagenesis through which they degenerate. Crichton suggests that it could be caused by a virus native to the planet. Speaking of mummy monster, he placed the crystals on an ash pile in a specific arrangement. From the ashes a second mummy monster is born, but never comes into the story. Why was this shot not cut form the film? 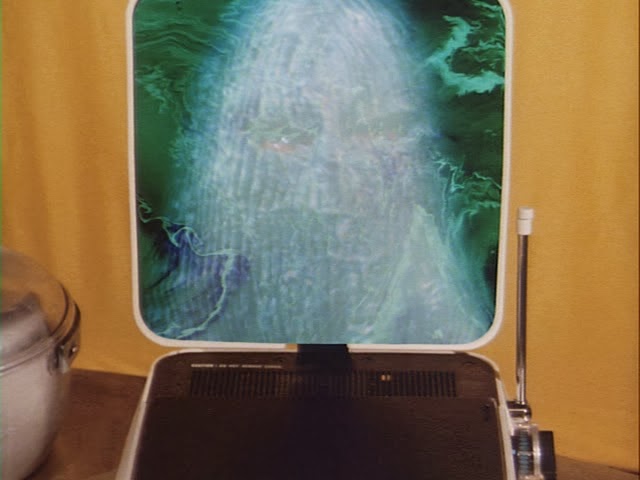 Wilma hooks up the Optical-Imager, or O.E.I., to Laura to help her regain her missing memories. She asks her to remember her past and her memories show up as a video on the imaging screen. I am not sure how trying to get Laura to remember is helping her actually remember the events. If she could remember they wouldn't be using this stupid machine in the first place. I would almost expect the screen to show nothing when asked to remember three days ago, cause she has no memory of three days ago. However, when Wilma asks about Laura's mother, the woman who took care of her, a ghostly image of the mummy monster appears. What does it mean? Outside the tent, Laura see's a larger tub full of the crystals that Hall is caring. She suddenly has a fit of violence and picks up a tool and is going to smash it over Halls head when Hawk stops her. Wilma explains that the crystals themselves must have put her in some kind of trans that made her violent. Or is it some kind instincts to protect the crystals at all cost that is breed into her? 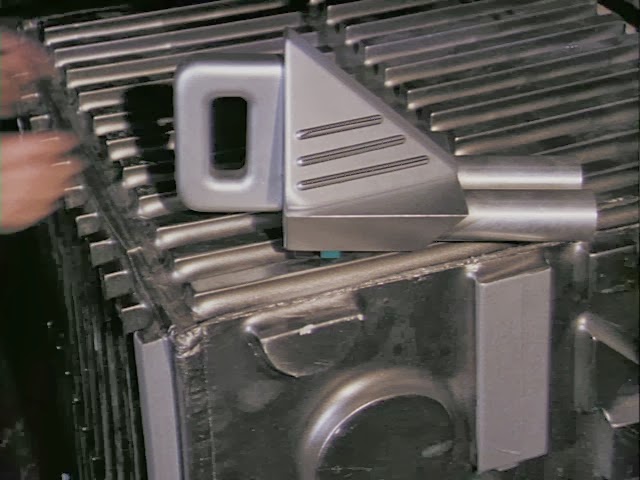 Crichton enters the bridge and admits to making a mistake. He got the stages of the Phibocetes species backwards. They start off as the mummy monster and evolve to a human. In their first stage, the mummy monsters where prone to violence and where supposed to be supervised. Genetic Engineers altered the DNA of a group of humans 400 years ago. They used the light refracted from the Therbidian crystals to activate their life force. This was to make an effective means of reproduction, eliminating the need for pregnancy, infancy and childhood. As these stages in life were seen as too fragile and removed by the engineers. Unfortunately, within the first 100 years of living there there was a massive volcanic eruption that wiped out the colony.
"How long can they survive in their mummy stage?" asks Asimov
"Indefinitely" responds Crichton.
"What about 300 years?" You're not very bright, are you Asimov? Crichton already said indefinitely, as in forever. It would seem that the mummy monsters where created by the engineers and are jump-started by the crystals. How then do they reproduce? Where the engineers going to constantly create new mummy monsters or where they supposed to live forever?
Twiki makes a strange comment that Crichton is his son. Huh? Didn't Dr. Goodfellow build Crichton? How would Twiki be his 'dad'? 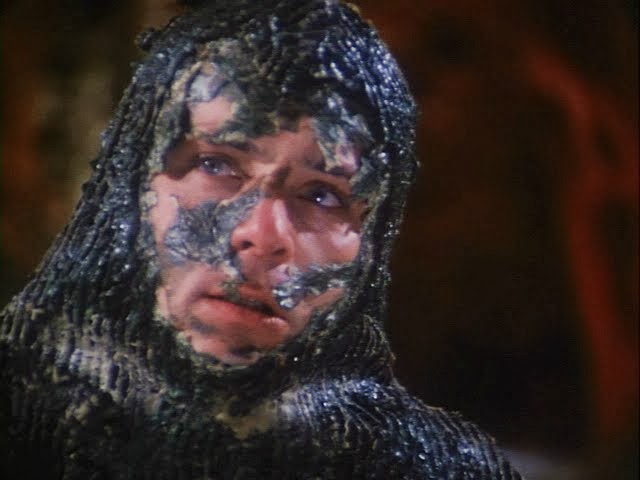 Buck assures Laura that she will not turn into one of those hideous monsters and escorts her back to camp. Just then the mummy monster attacks. His superhuman strength must be waning as Buck is able to take him on. The monster jumps on top of Buck revealing the huge zipper running down the costume. Buck rips the costume off, revealing a naked man underneath. Laura runs to the man's aide. He's no longer a monster with superhuman strength that attacks anyone who crosses its path, but a confused man who needs protection and nurturing. All it took was Buck ripping off the monster face to reveal the man inside. Feels like a Scooby Doo episode.

With the Searcher's fusion reactors at full power, the Away team prepare to leave. Laura assures Buck that she and he newly evolved man are going to be just fine together. He appologizes to Buck for his violent outburst. I mean, he was only protecting the one source of power on their planet that they rely on for the survival of their species. But no worries, Buck and them can take all the crystals they want now to use as fuel for their starship. Wilma teases Buck about Laura's previous obsession with him. All laugh and we end on another happy note. 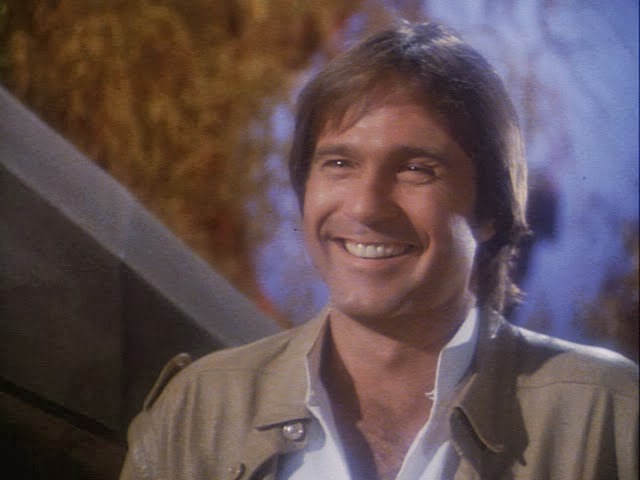