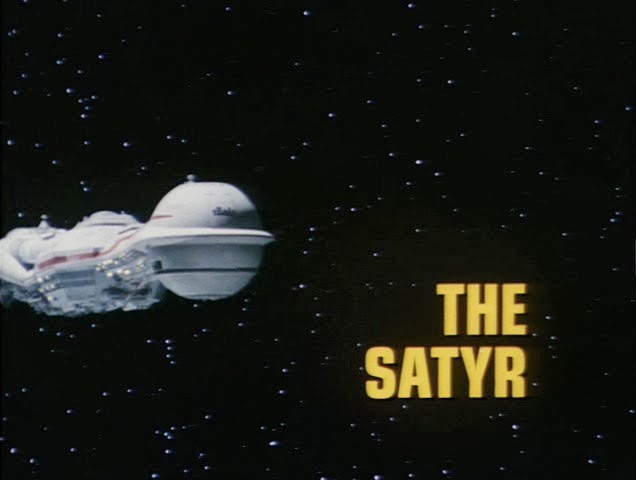 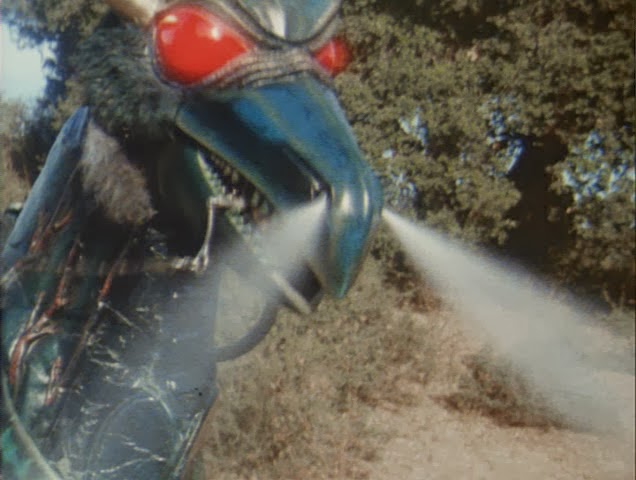 Delph calls to his mother, Cyra, to ask her if the grapes he pick are all right. Concerned that the young mans yell was too loud, she feels it necessary to bring the boy inside and bar the doors for awhile. Perhaps they will make some rose-berry tarts. Turns out her fears were valid, as Pangor, the Satyr, show up on his farelon, a mechanical horse. I have to admit, the first time I saw this horse that had steam shoot from its nostrils, I instantly thought of Klangstomper, from Jack Frost. Mother and son make a run for it and manage to make it to their house but not in time to keep Pangor out. He demands to drink some Moon Wine. I guess with the grape vineyard that Cyra and Delph where managing, they make Moon Wine. In a furry, Pangor kind of trashes their kitchen looking for food or wine. Delph gets thrown out of the house, and a sound byte of him screaming and telling Pangor to leave his mother alone is dubbed in, and at one point it sounds like there are several kids voices overlapping all crying for Pangor to leave his mother alone. 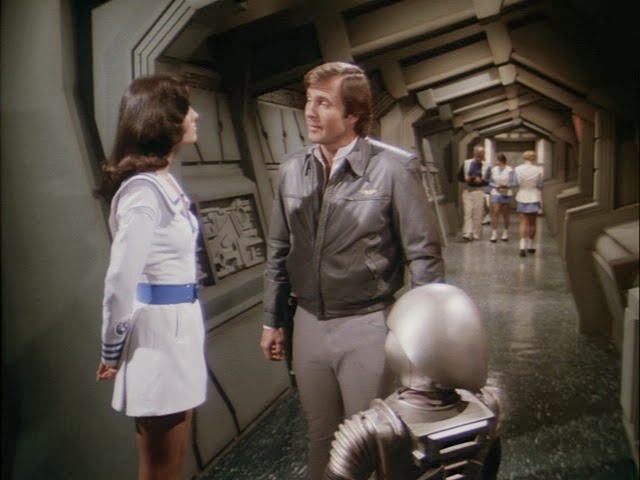 Buck is planing on staying behind to search for life on the planet Arkadis. Asimov warns that if the Searcher checks on an asteroid belt, it would delay them for 10 full days, leaving Buck along during that time. Buck learns that a Jason Samos ceased communication with Earth in 2485. He takes Twiki and a shuttle down to the planet. Pangor see's Buck's shuttle land and is mad. Buck finds the plaque left by the Earth colony: 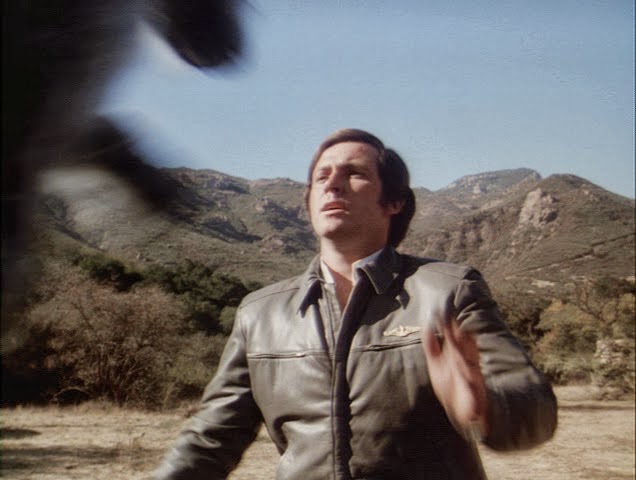 Just as Buck thinks all is quiet and calm, he is attacked by a Zewolf, which is basically a real dog dressed in a wolf costume with spikes along his backside. Buck won the fight, but wasn't left unscathed. Buck meets a little man in green who takes him back to his mud hut for a meal. Buck requests that Twiki stay behind and watch the ship...Wait, did they just "Star Wars" us? Delph takes Buck back home and is all excited to introduce him to his mom. I mean, how cool is Buck for taking care of that Zewolk like he did? Cyra uses a wild herb to bind Buck's wound. His injury instantly begins to feel better as the herb itself has unusually fast healing properties. Buck notices some bruising on Cyra's neck and becomes concerned for her. Cyra prepares Buck a meal of Bead sprouts and corn gourds with roseberries backed on top. Like any excited boy who wants to impress Buck, Delph grabs his fathers log book and shows it to Buck. All happy feelings are lost when the family hear the soft flute playing of Pangor. 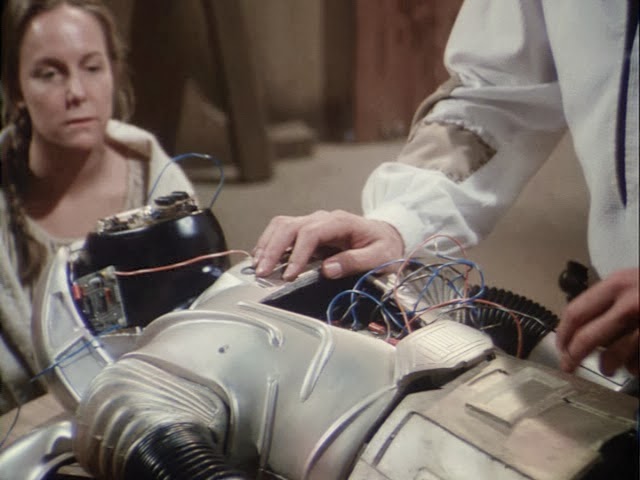 Buck takes Delph out for a flight and even lets him fly the shuttle for a bit. Flying is so easy that even a child can do it. In exchange, Delph is helping Buck with cataloging the plant and wild life. He is now able to identify Amberfire...er...Amberleaf, Devils fire, and Flute grass. The same flute grass that Pangor used for his flute! Too many disturbing memories there for mom. By night fall, Buck is sleeping in his shuttle on a hammock. Twiki comes in and warns him that Pangor is moving around along the edge of the woods. Buck goes out to investigate, but Pangor attacks with his electric whip. Twiki takes a direct hit in the chest. Buck manages to scare Pangor off and brings Twiki inside the Samos hut to repair him. Buck sends Delph outside to get his toolbox, and takes his sweet time. Cyra explains what happened to the colonists. Six years ago, the colonists voted to leave Arkadis and settle on another planet. Unfortunately their ship didn't make it. Jason Samos insisted on staying and turning Aradis into their own Garden of Edan. 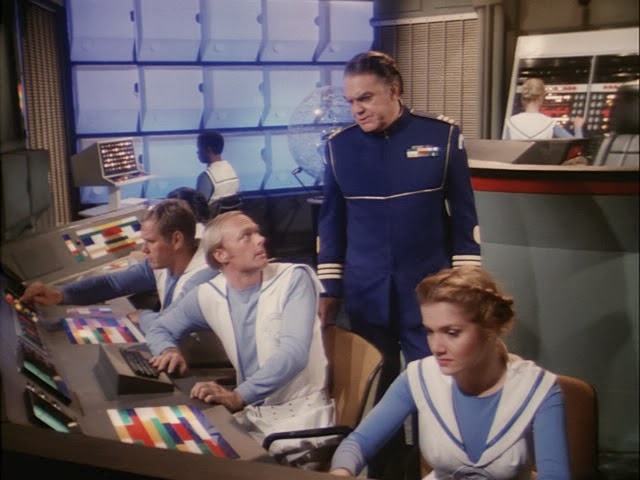 Asimov orders Davis to hail Rogers on the communicator. Crichton informs Asimov that the gesture is pointless because 17 minutes ago Arkadis past into perihelion to its sun, causing it to be in eclipse from their position. It will be 12 hours before communication will be possible again. It would seem since Buck lost communication with the Searcher due to Pangor's whip, Asimov is getting concerned about Buck's well being and considers aborting the Asteroid Sweep. Wilma assures Asimov that Buck can take care of himself and continue with their mission. 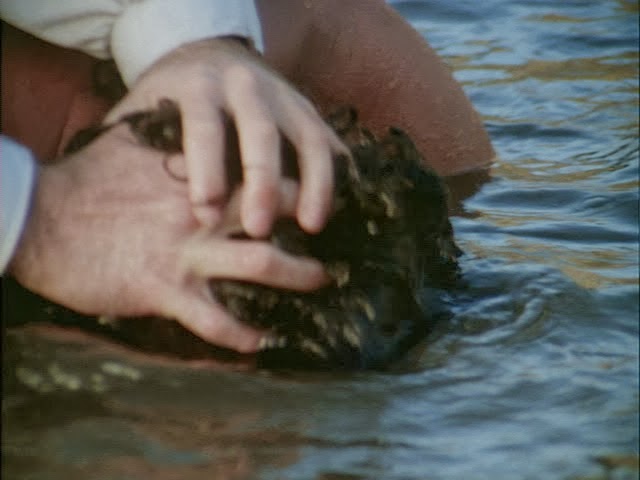 Buck confirms that the Moon Wine that Cyra makes is for Pangor alone. As long as he is happy with wine, he leaves them relatively alone. Well, almost. Pangor shows up while Buck is working on fixing his electronics and grabs Cyra. Buck threatens to kill Pangor if he didn't let Cyra go, but Pangor had the upper hand, forcing Buck to throw away his blaster. With a snap of his whip, Pangor destroys the blaster in the air, providing the needed distraction for Cyra to escape Pangor's custody. Buck taunts Pangor, calling him a coward, so he will chase Buck away from the Samos' home. They end up fighting where Buck is bitten on the shoulder. He is now infected in Satyr saliva. Pangor lashes out his electric whip at Buck, missing him and hitting the water. Something that would have conducted the electricity across the whole pond, but instead, the water sends the electricity back up the whip, through the grounded handle and into Pangor himself. The shock caused Pangor to drop the whip and jumps back into the pond to fight Buck. This time Buck gets the upper hand. Buck holds Pangor's head under water, attempting to drown him. This is quite a brutal scene. Buck's win of the battle doesn't feel like one I feel proud of Buck for. But like all horror movies, just when you think the villain is dead, he pops back up. 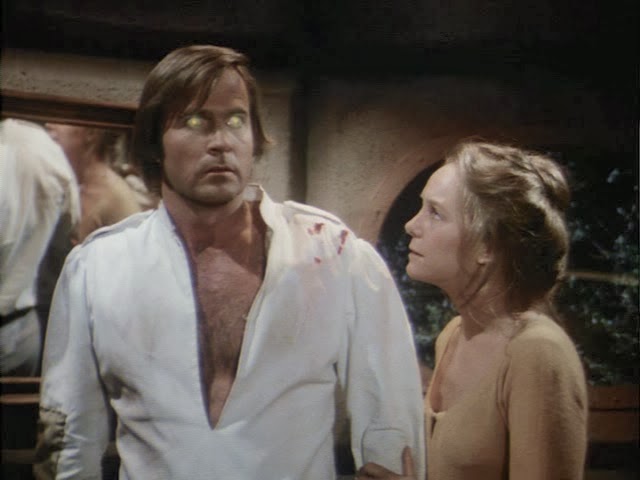 Cyra nurses Buck's wound. Delph seems excited at the prospect that Pangor is drowned. Cyra is not so happy. Turns out Pangor is her husband, Jason. I guess you're not feeling to proud of your kill now. Cyra talks about how her husband was a loyal caring man, who was eventually was infected by some virus that changed him into the Satyr within hours. This "Satyr" virus only affects men. Not women or children, just men. Not even all men, some are immune to the virus. A virus that Buck is now infected with. He is already beginning to change. Wow, Victor French sure does like his 'zoom' setting on the camera. 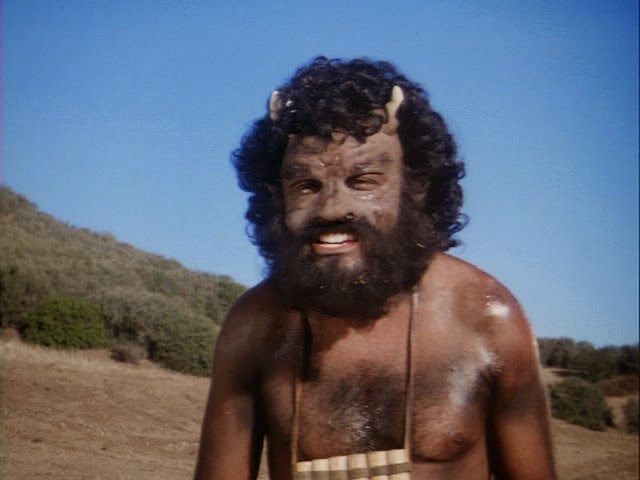 Admiral Asimov orders to abort the mission of the Asteroid Sweep. They have been trying to hail Buck for the last half hour since Arkadis is no longer being eclipsed by the Sun. Wilma and Hawk head back to the ship. The next morning, Buck has grown facial hair and horns. His appearance is frightening to Delph. The families troubles are not over with Pangor's demise. It would seem that the other Satyrs on the planet where being kept away from Cyra and the wine by Pangor. With him now out of the way (how did they hear that he was dead?), they prepare to attack. Delph goes to the house to get his fathers log book, and is taken by the Satyrs. Didn't they say they were there for the woman and the wine? Why did they take the boy and leave? To use as a bargaining chip. Trade the boy for the woman and the wine. Buck decides to use the gelignite he brought with him to blow Cyra's home and winery up. Pangor manages to stumble back to Cyra's hut before he collapses on her floor. He says that something happened in the lake that caused him to remember is life as Major Samos. So, Buck's plan was to lure the Satyrs to the wine storeroom while he snuck out to rescue Delph. Instead, he hears the two satyrs fighting and takes the opportunity to rescue Delph. 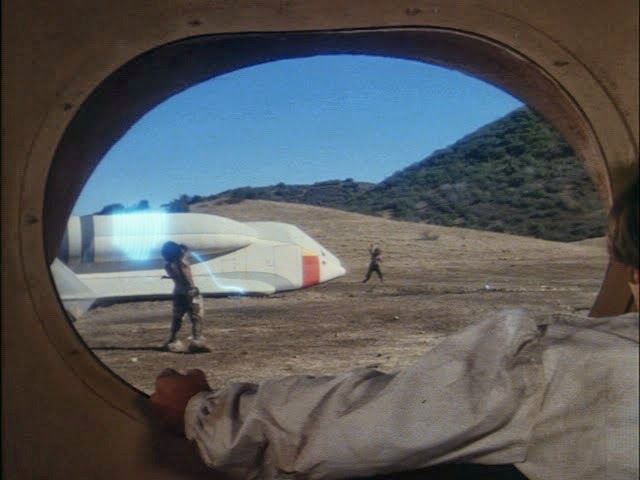 Twiki and Delph hide on the Shuttle and activate the protective force shield. Buck enters the house to rescue Cyra and finds Pangor there too. The two Satyrs being attacking the shuttle, but Buck draws them off. Or does he. They turn around and head back to the house. Pangor tricks them to come back by telling them that Bucks is tricking them to run off. The Satyrs enter the winery where Buck rigged the explosives. Pangor hits the detonator, blowing the place to bits, killing himself and the other two threats. Could he have been saved? Buck is rescued by the Searcher and Crichton is able to nutralize the Arbor virus that infected Buck's system. The virus is a type AB, variant 246 of caprid encephalitis. It's a hitchhiker virus attaching itself to the male Y-Chromosome causing the caprid symptoms. With antisomal therapy treatment 74484, consisting of 12,000 units hourly in and IV solution, for the next 72 hours, Buck should be back to his ol' self again. 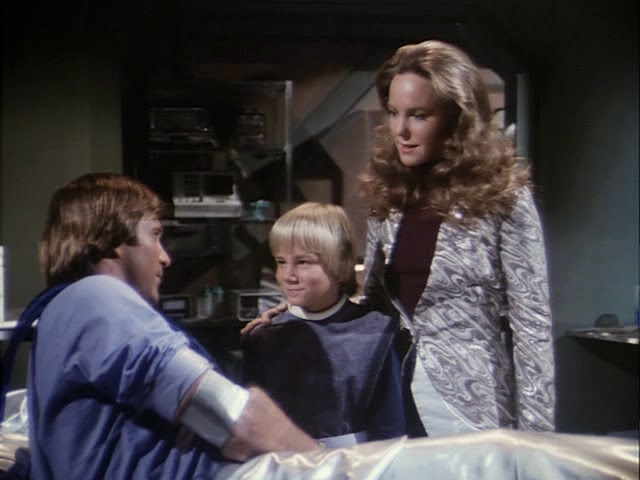 Oh, happy day, Buck's face is back to normal. Cyra and Delph just happen to be in the room when Buck finally awakes to say thanks and goodbye. They are being dropped off on the planet Orion 1. Wilma comes in to check on Buck and teases him that his true self came through on Arkadis. Wilma laughs and Buck smirks cause he knows that she got him back for the comment he made earlier in the show. 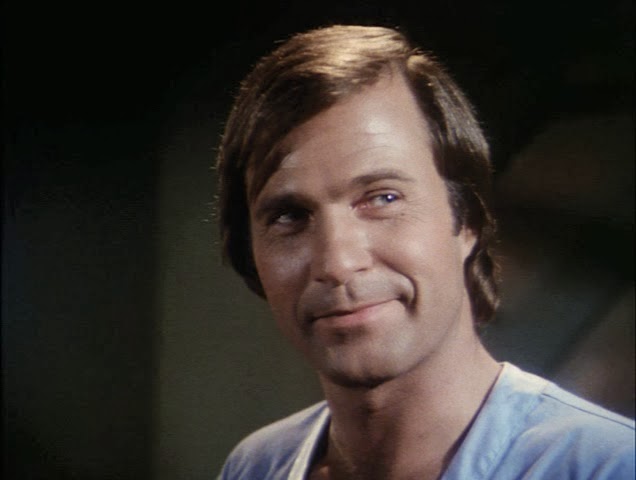