During the opening battle the Major, Lieutenant and Thornberry where killed before Buck turned off the 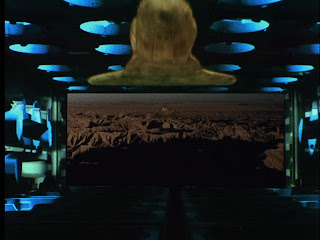 Computer Control, that wasn't doing anything but getting them killed, and destroyed seven "Pirate" ships single handed. During this whole dog fight, the miniature shots get reused again and again. Sometimes flipped or cut differently, but they certainly reuse the FX shots. Air Control 1 contacts Access for clearance of the Outer barriers to land on Corridor 1-0 Able. One example of an FX shot that gets reused is when Buck and Deering enter Corridor 1-0 Able after the battle. The shot shows Ranger 3 flying into the base again with a single Star Fighter behind it, instead of two Star Fighters. Oops. 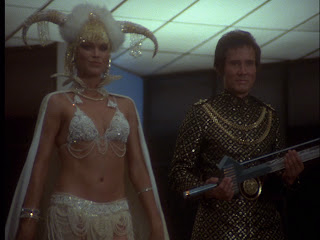 During the Draconian Trade Delegation, Princess Ardala takes the opportunity to thank Buck personally for "saving" the flagship. This is the scene where Ardala is wearing the outfit that is based on her Action Figure. Ardala informs the Earth Directorate that King Draco offers his own flagship, the Draconia, filled with the latest technology as a gift. The offer is to symbolize a new era of commerce and peace. Thus begins the celebration, or dancing if you will. A lot of colorful costumes and lights with what sounds like synthesized music. It's so dated and cheesy for today's standards, but that's what makes this scene fun to watch. Buck complains of a headache and gets a strong relaxant that he stows away as well as a rose to flirt with the Princess. 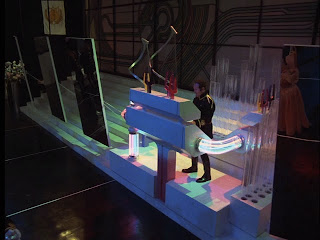 Buck is able to get the DJ to play some "Rock-n-Roll" music, that he and Ardala dance to alone while everyone watches. This is a "funny" moment to see Twiki dancing to the music as well, while Deering thinks the whole thing is disgusting, which I am sure is really just her jealousy peaking through. The show does make the audience think that Deering is beginning to have feelings for Buck in a more-than-friends kind of way. At the same time Dr. Huer and Kane are talking, and Kane informs Dr. Huer that he hopes to stay on Earth on a permanent basis. Dr. Huer welcomes the idea. Just makes me think back to Kane's plan to hide a Micro Transmitter on Ranger 3 in the first place. Seems, like the only thing that action actually did was cause the Earth Directorate to distrust Buck and give him a death sentence. Instead it provided no useful information, and promoted Deering and Buck to board the Draconia together that ultimately lead to it's destruction. Good plan Kane!

Oh, Colonel Deering just asked Buck if he was interested in going "some place" private after a passionate kiss. I guess Deering really does have a thing for Buck. Strange how that relationship never seemed to go anywhere in the TV series. Does Buck's rejection at this moment, in order to meet up with Ardala in private, put that wedge between them and doom any chances of them getting together? Let's find out...

Buck leaves with Ardala on her private shuttle, who is singing Chicago Chicago again. Twiki pokes his head out of a cooler 'case he is too cold. Ironic for a drone to not only feel cold, but also not like the cold. Correct me if I am wrong, but don't most computer circuits work better when cooled? I realize the writers did that to show us, the audience, that Twiki was coming along and for this little comedic relief.

Princess Ardala wants Buck to be the Man by her side to help unseat her father, and take his place. She seems pretty convinced that Buck is the kind of man that could defeat King (or Emperor?) Draco. Not sure how shooting down seven of her own pilots proved that to her. But who cares, right? So, while Buck is "trying" to seduce Ardala, at the same time all armament personal are reporting to Flight Bay to begin loading weaponry onto...something. Into the Marauders? Into Cargo storage units? Onto themselves? I can only speculate.

After drugging the Princess, Buck sneaks out and steals Tigerman's blaster. Why is Tigerman's pistol some kind of paralytic ray? What the heck! It cannot be a "freeze" 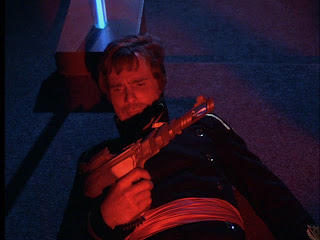 ray, as Tigerman wasn't frozen in ice, but he was frozen in place, being unable to move. Why would this be the weapon of choice for a bodyguard of the princes? A non-lethal and non-harming pistol that just cause people to remain stiff as a board in a paralyzed stasis temporarily. Was he afraid that he might accidentally shoot the princes while trying to subdue an attacker? If you look closely at Buck's sleeve, you can see the power cable for the light in the gun. Buck sneaks off and finds his way into a hangar bay, realizing that the "Pirate" ships are actually not pirates at all, but Draconian Bombers (or warships). Time to hide some bombs inside the thrusters. Knocking out a guard and hiding his body in Bay 3, Buck takes his uniform to slip around the hanger sliding bombs inside the thruster's of all the fighters he can. Buck refers the to the Warships as as Bombers masquerading as Marauders to Twiki. Who by the way has done nothing yet to warrant his being written into the scene. On a separate note, how can the Draconian Marauders be disguised as Marauders? Are they marauders or aren't they? I guess when the ships are masquerading as Pirate ships they are Marauders, but in reality they should be called Draconian Bombers instead, don't you think?

Once the Bombers begin to explode, Kane asks what's going on? "Our ships, they simply explode" said so casually and matter-of-fact like it he isn't all that surprised. Has this happened before? It's almost like he is thinking "Hmm, that's curious, they are exploding on ignition. I wonder if they were supposed to do that?" Well, they are able to get a few warships out that are all taken out by the Star Fighters. Buck fights Tigerman and Kills him by sliding a bomb under his belt. So, does Tigerman actually survive in later episodes, or does Ardala get another Tigerman? Well, if he survived the bomb, then he would have died when the Draconia explodes. Unless he stows away aboard the Princesses shuttle. That's a lot of IF's. 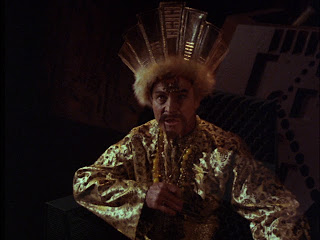 Emperor Draco enters the show via a hologram to reprimand Kane and his premature attack, as the kings attack forces are still hours away.
Kane enters Ardala's chamber, where he finds her on the ground. Mr. Silva seems to trip on his line at this point. So, the Princes and Kane escape in her private shuttle, and everyone aboard the Draconia perish as it explodes. An ending very reminiscent of Star Wars where the Death Star Explodes and Darth Vader's ship fly's off to fight another day. Deering comes onto Buck pretty hard in the last scene that Buck seems totally oblivious to.