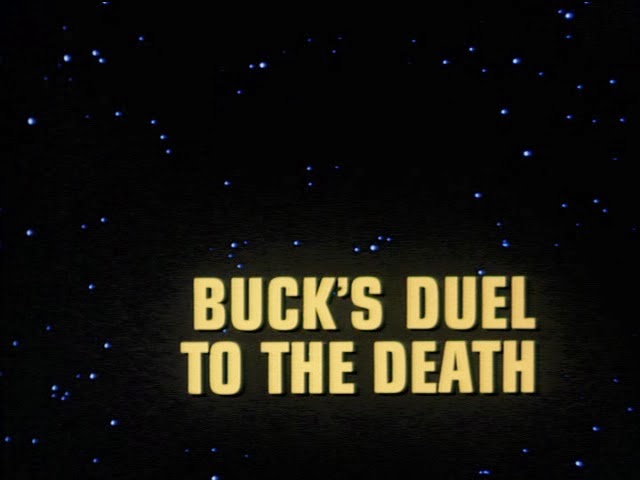 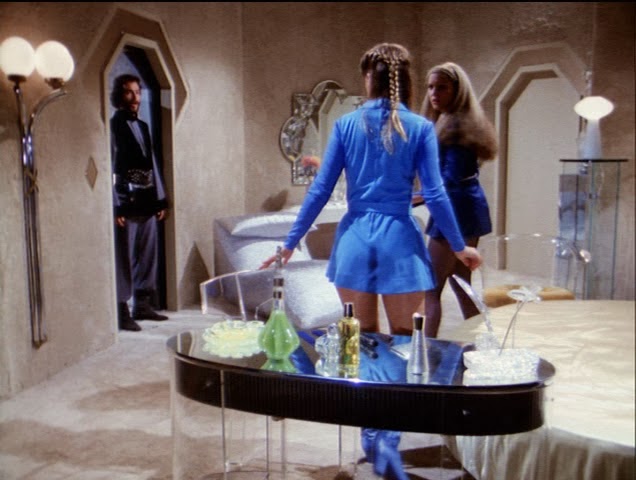 Maya and Vione chatting in there room when Karem comes in with two henchmen. The Trebor wants Maya for his harem and and they are there to take her for him. Vione goes to her father for help. Neil suggests that they get someone who is greater than The Trebor, the Roshon! Buck Rogers just happens to match the description of the Roshon and suggests bringing him to their planet, Katar, to help. Deputy Minister Kelan is against this plan. Neil heads off to Earth for Buck. Wilma and Buck are on their way back to the Hanger when Neil's ship comes into view, being perused by four Scorpion fighters. Wilma informs the fighters that they are violating Tarran airspace and to cease fire. Undeterred, the pirates continue their attack. 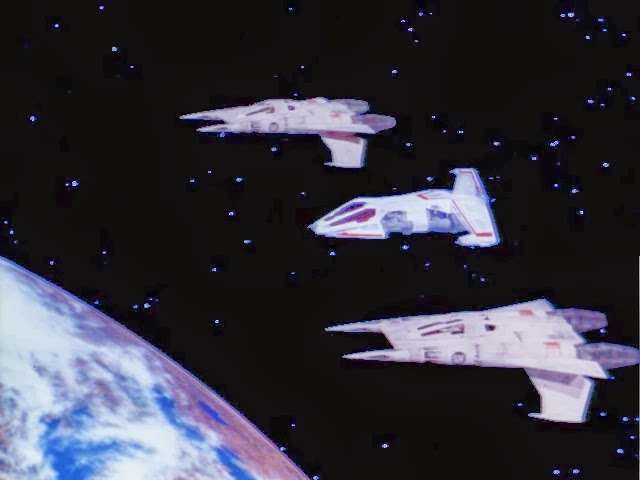 Wilma and Buck are forced to engage and destroy the ships, then escort Deputy Minister Neil of Katar to New Chicago. Neil asks if Buck and Wilma would like to be his guests on Katar in their city Gaan. Wilma declines, but Buck is all gun-hoe. Twiki invites himself, and Buck corrects him saying "his manors are showing". Neil saves face and encourages Twiki's presence as well. 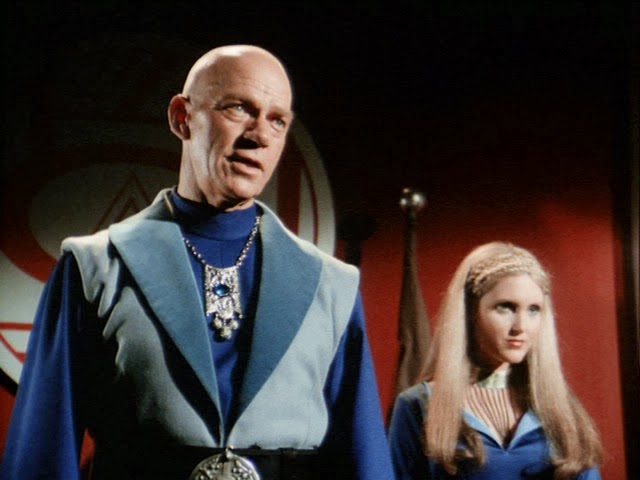 Buck is shown in to meet Deputy Minister Kelan, Prime Minister Darius, and Vione. Then they drop the bomb shell on him that they brought Buck there with ulterior motives. Why did they not ask for his help in the first place? The Trebor gets ready to broadcast his monthly "contest" when Maya is brought in to him. The Trebor is wearing Rafael Argus's costume. That suite sure gets around. Greta informs The Trebor that Neil succeeded in making it to Earth and bringing Buck Rogers back with him. Greta suggests that Buck Rogers could be the Roshon. The Trebor however, doesn't believe in the Roshon, but sends two goons to take care of Rogers. The contest begins. It is a duel to the death between The Trebor and the Katarian corps. When The Trebor kills the Katarian solider, Kelan seems pleased. Hmm. He is wearing all black..I wonder if that means he is a spy? 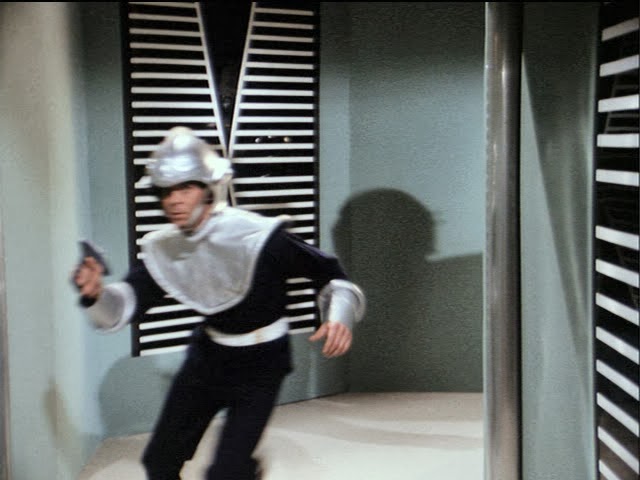 Buck is escorted out of the Prime Ministers office when he is attacked by The Trebor's two goons. But they are no match for Buck Rogers. Buck kick's first. How these assassin goons got into the government building and all the way to the Prime Ministers office without being stopped, who can say, but once they have been subdued, a squad of security show up and take them into custody. The Prime Minister doesn't seem surprised that The Trebor has sent assassins to kill Buck Rogers, or that they nearly succeeded. Vione continues her escort to Buck's guest room. Buck is thinking things over when he hears Vione crying just outside his room. Nothing like a beautiful crying woman to melt Buck's heart. He's a sucker for a woman asking for help. How can he say 'no' now? He contacts Dr. Huer and Wilma asking for any information on the Trebor. Wilma heads to the archives to do her search. Why would the information on the Trebor be in the 20th Century Archives? 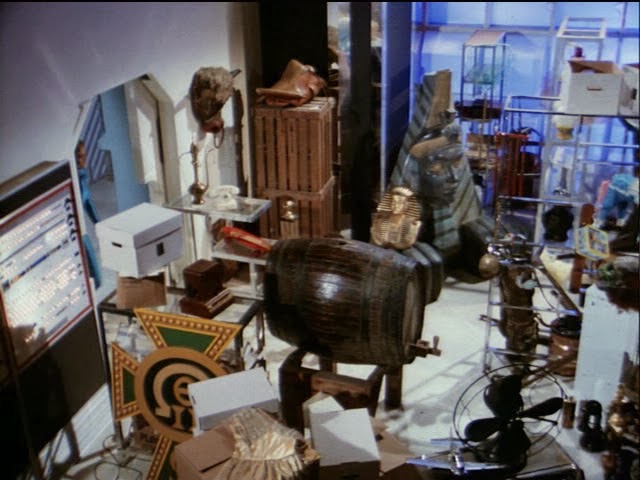 Buck informs the Minister and his deputies that he plans to attack The Trebor at his palace by entering the through a series of secrete tunnels. The Prime Minister feels this plan is inventive. Wilma enters the Archives, but Dr. Junius is out, Dr. Albert is in. The stage is the same as Dr. Mallory's laboratory in Planet of the Slave Girls & the Central Data room from Unchained Woman. Dr. Albert moves a metal lunchbox (Behind the Scenes: It is a "18 Wheeler" lunchbox) to give the impression that he is still organizing all the junk in the room. He was given the information about Katar's current Trebor by Dr. Junius to give to Wilma. She finds it most helpful. Course, it really isn't any information that we didn't already know. Buck, Darius and Neil leave for their assault on Trebor's palace. 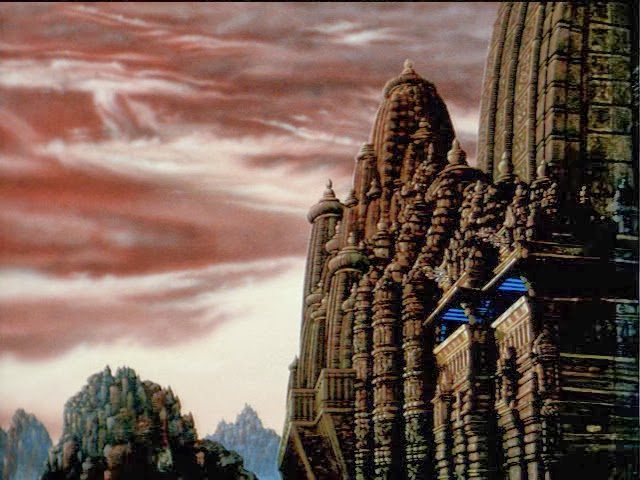 Kalen stays behind and intends to warn the Trebor of the attack. However there is violent sunspot activity on Solon disrupting the Deputy Ministers Vid-phone. Central Communications informs Kalen that the Vid-phone should be up in an hour. Rogers and the gang arrive in the Palace with no problems. Neil and four security guards go to the Trebors quarters where they will see a vacuum discharge conduit on the right. Not sure why that little bit of information was necessary, but there you are. Buck and Darius come upon four guards playing a game on the floor instead of being at their posts. Sure enough, they are definitely not prepared for an attack directly in the palace. 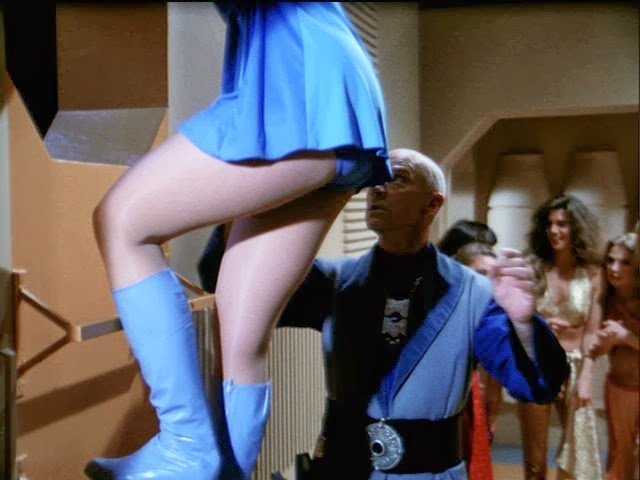 After taking the guards out, Buck goes in the emergency entrance into the women's chamber. Seconds later a stream of girls are coming out of the tube. One, Two, Three, four...how many girls? Seven, Eight! Neil, after three hours of trying, finally is able to contact The Trebor's palace and warn him of the attack. Too late! Neil and his four men blow up the wall and enter Trebor's chambers. Instead of killing him on the spot, Neil wants to capture him so he can stand trial and be convicted. Unfortunately for Neil's men, Trebor's guards show up and down they all go, stunned. Only Neil makes it out. Darius escapes with the nine women. Buck goes back for Neil but is quickly captured. Darius goes back for Buck and rescues him. They all escape back to Gaan. The Trebor pursues in the Raven. Buck installs a transistor on Twiki to help deal with Trebor's electric surges. Vione enters the room and of course is totally smitten with Buck. She gives him a medallion, a Katarian tradition, as the women give their men these medallions before the go into battle for protection, strength and love. 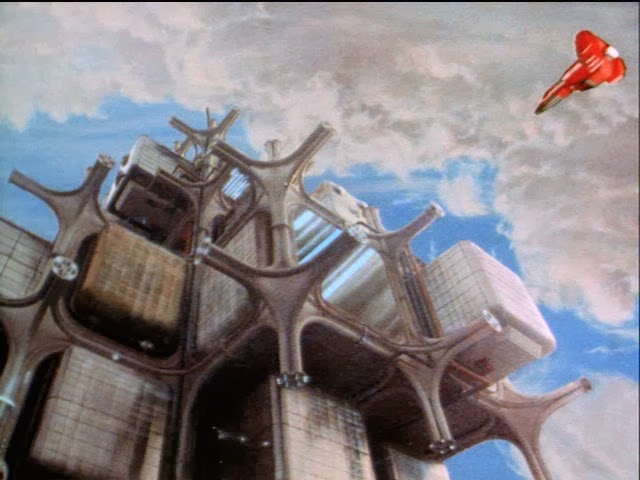 Situation Red alert is in effect as The Trebor's ship arrives in the Gaan hanger. Buck is ready for him. The shooting begins. Several men from both sides are shot. Who can say if they are killed or merely stunned? Trebor calls for a cease fire and fires his electrical bolts at Buck. Using Twiki as a ground and resistor, they are able to redirect the electrical surge back at the Trebor, shorting his electronic circuits under his skin. Now, the fight is man to man. Roshon vs. Trebor. The Trebor is no real match for Buck. Sooner rather than later, he down for the the 10 count, as Twiki put it. Darius orders that all the stunned men be taken to the medical bay. Buck has literally fulfilled the prophecy of the Roshon. He is the 500 year old man who defeated the Trebor and set Katar free. Buck addresses the world. He tells them to stand up for themselves and have the courage and strenght to be free and remain that way. He tells them that they are all the Roshon. Buck makes out with Vione and then leaves her forever. The story of Buck's love life in a nut shell. 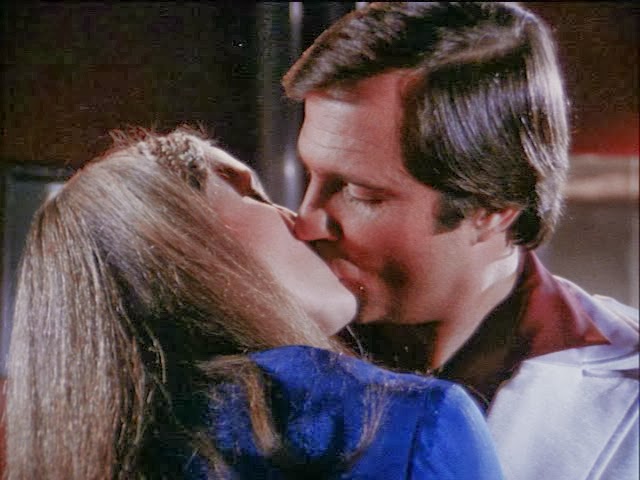 Back in Buck's apartment Twiki comes in wearing a cowboy outfit. Buck refers to Twiki as Billy the Kid and plays along. Twiki wants the money, the girls, the horses and for Buck to leave town. Buck says no. Twiki compromises and lets Buck keep the horses. Ha ha ha. Smile shot, and end episode. 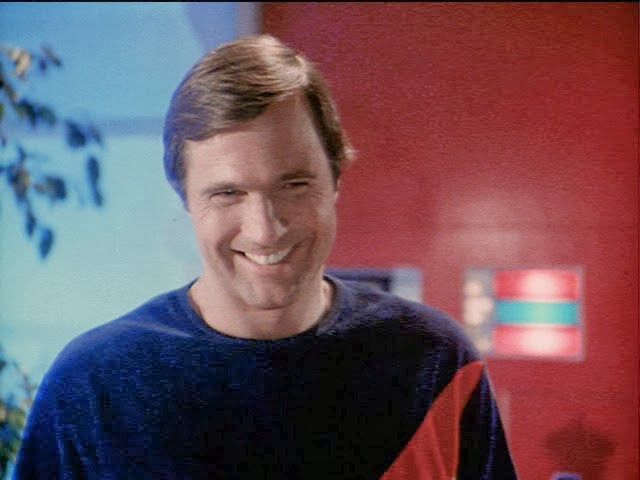