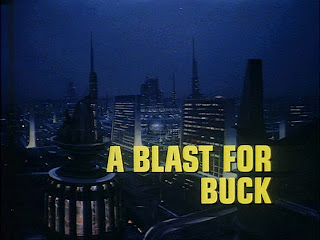 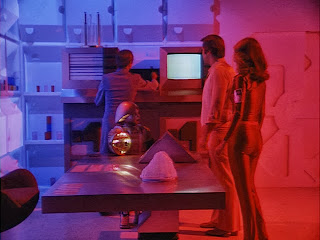 Riddle me this. What is more annoying than a poorly written episode? A Flashback episode that requires no writing at all. The entire Earth Directorate Complex is under alert. 10 minutes ago the orbital defense system registered the presence of hundreds of alien objects in Earth's orbit. Squadron Fighters were put on alert and sent out to intercept these objects. Unfortunately, they didn't see anything. Buck, Wilma, Twiki, Dr., Theopolis and Dr. Huer are trying to find out what is going on when a tune beings to play, and a tightly focused energy beam, that was able to penetrate their defenses, transports a yoyo looking thing onto Huer's desk. It's strange appearance set's plans in motion to secure the entire building. 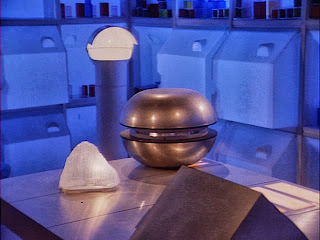 Buck suggests that it could be a touch activated communication devise. Sounds like a reasonable deduction from a object that cannot be penetrated by Theo sensors, and is unidentifiable to Huer's scans. Well Buck touches it anyways and the large yoyo shoots an energy beam into Huer's computer. Basically downloaded a program straight into the Earth's Directorate system. Could it be a virus? Or something worse and more devastating to all New Chicago's Environmental controls? Nope, just a Riddle. 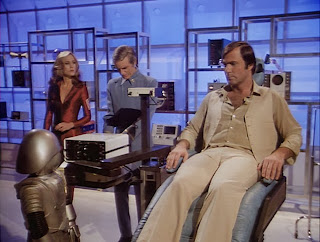 Feeling that the riddle is linked to Buck, they strap him to a chair and use psych-probes to recall his memories. His first thoughts immediately go to all the women that he had a thing for from previous episodes. Wilma snickers at this, almost as if she is amused by Buck's indiscretions. Back to the riddle, Buck thinks about the key...key...Sinalola is the first flashback. Then Unchained Woman.

Alarms start to go off as the communications yoyo disappeared from Huer's office. It apparently did it's job, and was taken back by the one who sent it. Buck insists on getting back to the mind probing. Next flashback is the episode Cosmic Whiz Kid. Hmm, the end is the middle...the riddle is almost byzantine...byzantine...Zantia! Now to Planet of the Amazon Women. Nope, nothing worth looking at there. Oh, No! The Alarms are going off again! What now? Another energy beam is being sent that transports an hourglass. Time must be running out. What are they going to do? 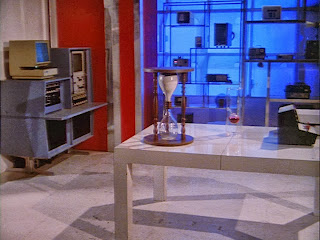 Time to switch things up. Wilma is now undergoing the psych-probe. Her first thoughts go to Return of the Fighting 69th. Course after all that time, Theo tells them that Roxanne and Corliss are both in the Detention-Rehabilitation complex on Lycaste Alba. Information that may have been helpful before they wasted time with that mind probe! Now let's revisit Planet of the Slave Girls. No, that is a dead end too. OK, time for Buck's turn again. This is getting fun now. a trip down memory lane. The threat no longer seems to loom over them. This time, Buck goes to The Plot to Kill a City. Course after that probing, Buck himself concludes that was not the right avenue to go down. 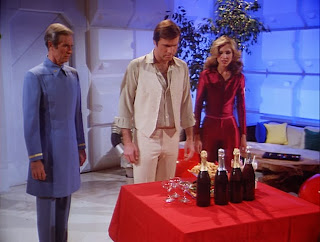 Unable to get any information from Buck and Wilma, Huer connects the mind probe to Twiki. Course Twiki instantly goes to Tina in Cruise Ship to the Stars. Twiki seems to come up with a lot of memories that he was never around to acquire, but let's not dwell on that. Buck's last choice is Princess Ardala in Escape from Wedded Bliss. Wilma shoots that idea down believing that even Ardala would not kill thousands of innocent people without a reason. Course who is to say there is no reason for this threat? Alarms are going off again. A new Directional beam is locking in on their coordinates to materialize in Buck's apartment. Off to the Buck Cave! They all arrive in Buck's room just in time for a table cloth, four bottles of 2490 [Genesian] champagne, three champagne glasses, three milkshakes, a bowl of french fries an a (Rigellian lizard) hamburger platter to materialize on Buck's table.

Now Buck is starting to realize who is responsible. Buck asks what day it is. Huer responds that it is Deckel 31. Or December 31st by our Calendar. It would seam that we went back to December from Buck's Birthday episode that was supposed to be January. Buck indicates that New Years is no longer celebrated at midnight of January 1st. Course Buck finally figures it out that it was Hieronymus Fox who sent the riddle only because of the place setting and realizing what day it was. Nothing to do with the riddle. 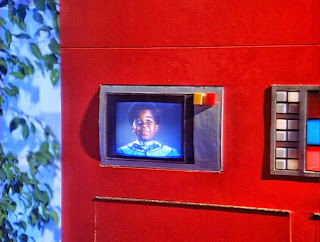 Apparently Hieronymus Fox got a new Matter Transmitter and wanted to try it out. So he sent the riddle and the present of the party favors. Why did he have to trick their sensors to detect hundreds of alien objects in space, or why he had to put the entire Earth's Defense on high alert, who feared a intimate attack or bomb scare? Oh just some magnetic field bug. All in good fun. Now to explain the riddle...

First line is about Buck (they figured that one out themselves). The next line is about the hourglass that was the "next" thing sent, before the "last" thing sent. The next is the end of the old year at the middle of the night, midnight. Lastly, when the sands disappear from the hourglass, then it is midnight that's cerebrated with a blast of fireworks and party noises. 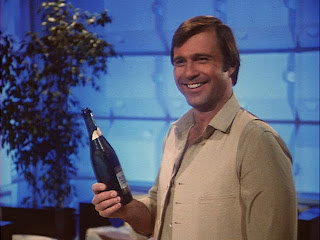